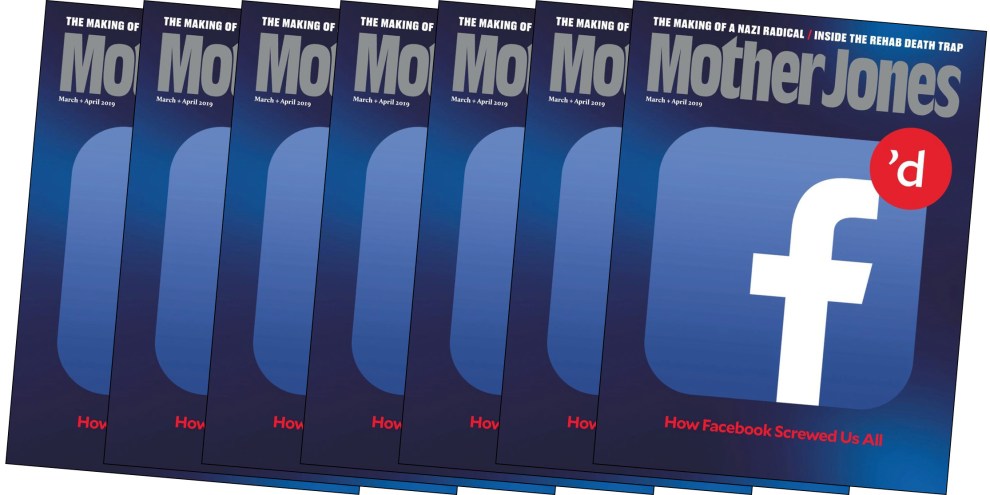 A couple of days ago I mentioned that Facebook “tweaked” its news feed algorithm to help conservative sites and hurt liberal sites like Mother Jones. That was bad enough. But yesterday we learned it was far more malicious than we knew:

In late 2017, Zuckerberg told his engineers and data scientists to design algorithmic “ranking changes” that would dial down the temperature….[But] there was a hitch: Everyone knew that most of the untrustworthy “junk” on Facebook, when it came to politics, originated with “conservative/conspiratorial” sites. And while Facebook was under fire from both right and left, its chief worry—now that Republicans had regulatory power in Washington—was “getting Trump off their back.”…It was made clear that “we can’t do a ranking change that would hurt Breitbart.”

….The code was tweaked, and executives were given a new presentation showing less impact on these conservative sites and more harm to progressive-leaning publishers—including Mother Jones. “The problem was that the progressive outlets were real [news] outlets like yours,” recalls the ex-employee, “and the right ones were garbage outlets. You guys were one of the outlets who got singled out to balance the ledger.”

The full story is here. The end result was an enormous decline in traffic from Facebook and a consequent decline in revenue—which was undoubtedly the goal of the Republican activists (and Facebook VP Joel Kaplan, a former George Bush staffer) who lobbied for it.

In other words, this was no accident. Facebook was determined not to antagonize conservatives, regardless of their content, and the only way to do that was to reduce the reach of liberal sites. So they tweaked and tweaked until their algorithm had hurt Mother Jones and other liberal sites sufficiently and then rolled it out.

This is maddening. But we can make up for it via reader donations. So please help out if you can. Even if Donald Trump loses on November 3, the progressive fight will just be getting started. You can donate here:

You can contribute once or sign up for a monthly donation. And it’s tax deductible. The more you donate, the more you save!