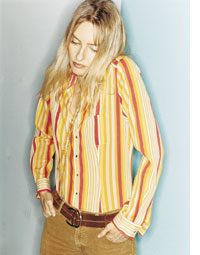 Aimee Mann is legendary in the music business, not just for her songwriting, but also for her battles with record labels. Not that bitter fights with big labels are anything new — look no further than the bizarre front-page feud last summer between Michael Jackson and Sony. But instead of merely railing against the music business, Mann bit the bullet three years ago and did something about it.

She bought back the masters of her album Bachelor No. 2 from Interscope Records — which had told her they wouldn’t release the record because it lacked commercial appeal. She then put out the album on her own label — and sold 200,000 copies. To make sure she’d never have to go back to a big label, and to help other artists avoid that fate, three years ago she also formed United Musicians, a sort of anti-label that gives independent artists (including Bob Mould and Mann’s husband, Michael Penn) a vehicle to distribute and promote their work while allowing them to retain the rights to the music.

You’ve probably heard Mann’s voice even if you don’t recognize her name. Before her solo career, her band ‘Til Tuesday had a big hit with “Voices Carry.” The movie Magnolia was structured around her songs — including many of the tunes Interscope thought unmarketable — and the soundtrack earned her both Oscar and Grammy nominations. Her new album, Lost in Space, is full of just the kind of gorgeous melodies and arresting lyrics that inspired Elvis Costello to seek her out as a collaborator and moved Liz Phair to kneel before her when they met backstage at a concert. Mother Jones spoke to the 41-year-old Mann from her studio in Los Angeles, where she’s so thoroughly indie that she answers her own phone.

Mother Jones: You used to complain that record companies would ask you to do things you felt you weren’t good at — like schmoozing and posing for pictures. Being independent, do you still have to do a lot of things you hate?

Aimee Mann: First of all, anything you do is actually working for you, so that makes a big difference. You’re motivated in a different way. At a major label you can start to feel that you’re working for them, and that any work you do, you’re never going to see any benefit.

MJ: Which makes it hard to get up in the morning —

AM: It makes it hard to play along. It certainly filled me with resentment.

MJ: When things were at their worst with the record companies, did you ever think about getting out of the music business?

AM: Absolutely. You’re working a job that’s not making you any money, one that’s causing you an enormous amount of stress. For a while you say, “Well, but I have the music. I have control over the music and the music is what keeps me going.” But then, when they start fucking with the music, you’re like, “I guess I don’t have the music either. So why don’t I stop making the music so at least I don’t have to witness it getting ruined?”

MJ: How does United Musicians work?

AM: What it is, on a very small scale, is a conduit to distribution. If you’re an artist trying to put out your own record on your own label, it’s hard to get a distribution deal because no one wants to sign a deal with one entity. They want to sign distribution deals with labels, who have lots of product, lots of artists. So it’s distribution, and we can also offer some marketing and promotion.

MJ: What do you see United Musicians doing five years from now?

AM: I’d like to have more resources to offer people, so we can put out a nice handful of records. We use a very small percentage of whatever the record sells to pay for expenses. We were just able to hire this one guy, which we’re very excited about, you know, like one new person in the three-person office. [Laughs.]

MJ: Two to three is a big increase.

MJ: I wondered about that, if leaving your label was a financially difficult decision.

AM: No, shockingly. I didn’t make the decision thinking I could make any money — but I hadn’t made any money anyway, so it hardly mattered. For me it was like frying pan, fire — I don’t care, at least I’ll be independent. At least the fire has a certain purity about it. At least at the end of the day I could have a record I was proud of, rather than one that I had to constantly defend against interlopers.

MJ: Your last album sold 200,000 copies, which is off the charts for an independent. And you’ve become known for your creative distribution efforts. I was interested to see you put the new album in its entirety on aimeemann.com before releasing it. A lot of musicians are scared of the Internet and would never do that.

AM: Well, we’re streaming it, which is not downloadable. To me, that’s more like radio: You can tune in and you can hear it. I don’t believe in asking people to spend $15 on something they’ve never heard before. That’s just unreasonable. And radio’s so difficult in this country that that’s not really an option. So this seemed like the best possible solution.

MJ: I’ve been fixating on the first lines of your new songs: “This is how it goes — you’ll get angry at yourself” and “You don’t know, so don’t say you do.” It made me wonder if some songs just start as a line in your head.

AM: [Laughs.] It’s hard to get started sometimes. “This is how it goes” — I’d actually written that down. Probably not the whole first verse — because if I have an idea, it’s not in meter. Then I came up with music that I wanted to work with it. Generally, I’ll play a bit of music and be humming a melody, and a line will suggest itself. And then I have to sit back and say, “Okay, what’s that about?”

MJ: Has being independent had any effect on the day-to-day work of writing songs?

AM: It’s all easier and more fun because there’s not this extra weight of trying to placate or negotiate or circumvent or strategize with the record company. That takes up a lot of room psychologically. And also the release of knowing I can tour if I want to — or not at all. If I don’t want to do any interviews, I don’t have to.

MJ: That sounds much more fun.

AM: It’s just a real relief. If you’re on tour, you can’t do press all day, or I can’t. It’s too exhausting. By the time I start playing the show I have nothing left. But a record company never understands that. They rely on the artist so much to do the bulk of their promotion for them. It’s like sending out the traveling salesman.

MJ: Do you watch Britney Spears and just get tired? She’s singing, she’s dancing, she’s in magazines, she’s in movies.

AM: To have that level of visibility you are working 18 hours a day. And even when I was 20 years old I don’t think I could have taken it. It helps to be ambitious, and it helps to be young and healthy and strong. But still. That’s why people have collapses. I went through a period that lasted two or three years where I was clinically exhausted. They call it adrenal exhaustion. And I got that from just touring.

I mean, the Mariah Carey thing. She’s working constantly. And so the idea that she had a nervous collapse — I’m surprised more people don’t. And I think that’s why people start taking drugs, because you have to do the work, so you do whatever you have to do.

MJ: I think that’s what fans think when somebody’s had a breakdown. They just roll their eyes and go, “Drug problem.”

AM: What they don’t understand is there are other factors that contribute to you taking drugs in the first place. If I’d been a slightly different kind of person I would have gone, “Fuck it, I’ve got to get through this. I’ve got to play this show — where’s the speed?” I certainly understand how it happens. Because nobody is going to step in and say, “Mariah, you’re working too hard; it’s not worth it. Calm down — the label’s not going to stop supporting your record if you take a week off.” But the implication is, of course, that they will stop supporting your record and they don’t care about you.