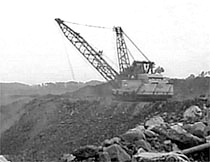 In the tradition of recent David-and-Goliath documentaries such as Blue Vinyl and Store Wars: When Wal-Mart Comes to Town, this quietly heartbreaking film depicts the battle between citizens of Blair, West Virginia, and Arch Coal Inc. over the issue of mountaintop removal mining. Taking its title from a 1999 Mother Jones investigation, Razing Appalachia provides shocking images — not only of “decapitated” mountains but of miles of streambeds entombed by the rocky by-products of such industrial beheading.

Working against the Blair-based activists is the fact that the head of West Virginia’ s department of environmental protection was a coal executive for 17 years. In addition, the end of mining expansion would likely mean the loss of some 400 jobs for union miners in this poverty-stricken region. Alas, these complexities aren’ t done justice by the unsophisticated filmmaking. But director Waters cuts to the heart of the matter when she captures a lifelong resident’ s rebuke of a government official: “You’ re the Environmental Protection Agency,” he says. “You’re not protecting me.”