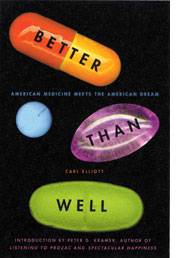 It’s been 10 years since Peter Kramer listened to Prozac and relayed to the rest of us its overwhelming question: What are we to make of medical treatments whose primary purpose is not to heal us but to improve us? Since then there has been a proliferation of these technologies: not just a fleet of antidepressants but also wrinkle-erasing Botox injections; muscle-engorging steroids; surgeries to augment, ligate, deflate, and relocate body parts that we find too large or small or out of sync with who we are or want to be. Each day, it seems, medicine finds another way to make us better than well.

Carl Elliott, who earned his M.D. only to leave his profession (before he’d ever treated a patient) for a career in bioethics, has taken up this question where Kramer (who wrote the foreword to this book) left off. In Better Than Well, he confronts a dizzying array of what he calls enhancement technologies — not just drugs and surgery, but also hair and skin coloring, accent-reducing lessons, voice synthesizers for aphonics, and so on — and the complex moral (and even spiritual) problems they pose. He visits with therapists and patients and draws on literary sources from Wittgenstein to the Wizard of Oz to riff on what he keenly observes. The purpose of this exercise is neither to praise nor to bury enhancement technologies but, as he writes in his introduction, “to use that topic as a lens through which we can examine a much larger issue: the nature of identity.” What kind of people are we, Elliott is asking, that we will pursue a better life by having deadly poison injected into our wrinkles, getting our tongues split, our genitals pierced, our neuro-transmitters rearranged, or the facial nerves that make us blush severed — all the while claiming that the technologies are making us more authentically ourselves?

The answer Elliott offers, in short, is that we are very confused people. We’re caught between an imperative to self-improvement and the lack of any universal sense of what actually constitutes improvement. Given this all-form-and-no-content moral standard, Elliott argues, we are doomed never to be sure if we are fulfilled enough or if our fulfillments are truly fulfilling. Indeed, we can only gaze out dumbly into the marketplace for the goods that the mass media tell us will make us better (after, of course, they’ve told us what’s wrong with us). We have become empty selves seeking a chimera — feeling good about ourselves — in a way that will only redouble our restlessness and send us back to the store. Consumer culture and the empty self are, literally, made for each other.

As are, in Elliott’s analysis, American medicine and the imperfect bodies of all these confused selves. Medicine is at least as good at creating diseases as it is at finding them, at making something medical out of what might otherwise be considered a normal, if undesirable, variation on being human. So, as Elliott points out in his discussion of the antidepressant Paxil as a treatment for “social anxiety disorder,” the trick is for the drug company to convince us that anyone who can’t be outgoing can’t be fulfilled — and is thus sick in a way that Paxil, and only Paxil, will fix.

So is enhancement technology a bad thing? “My aim in this book is not to make an argument so much as a diagnosis,” Elliott says, and he is true to this goal. He is surely critical of the enhancement-seeking self and the society that spawns it, but Better Than Well is much more a field guide to modern identity than a polemic. Elliott’s capacious and learned intellect is well suited to this discursive approach; he is able to tug on the thread of a single enhancement technique and unravel what seems to be the whole of American culture. It’s a method that is sure to frustrate anyone in search of moral clarity and, at times, any clarity at all. A representative chapter, nominally on the subject of skin lightening, covers an astounding range of subjects — from John Griffin’s Black Like Me to Civil War reenactors to Elliott’s expatriate life in Bali to Kierkegaard’s musings on boredom — and finally ends with a broadside against ironic detachment, which focuses on Harper’s and takes place against the backdrop of the Grand Canyon.

A reader might wish he had a road map on this meander, but someone prepared to take a long, leisurely drive through the countryside of self-improvement with an affable and knowledgeable guide is bound to come away feeling improved — maybe even fulfilled — and glad for the ride.

Gary Greenberg is a psychotherapist and freelance journalist living in Connecticut.