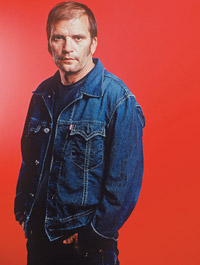 “It’s never, ever unpatriotic or un-American to question any fucking
thing,” observes Steve Earle. Or is it? In 2002, Earle found himself widely reviled for writing
“John Walker’s Blues,” an attempt to get inside the head of the American who was jailed for hanging
with the Taliban.

Just an American Boy offers a healthy shot of Earle’s music —
bracing blend of Stonesy rock, honky-tonk twang, and bluegrass jangle — but isn’t really
about his art. It’s about being an artist in a cultural climate that encourages black-and-white
perceptions of reality. While director Amos Poe’s low-tech mishmash of performance footage,
backstage vignettes, and encounters with the press leaves much to be desired technically, the
documentary effectively captures Earle’s whirlwind public life.

In a radio interview, Earle says “John Walker’s Blues” seeks empathy
instead of retribution. That quest for understanding without judgment has always informed
his writing, from early Springsteen-like chronicles of everyday people to a recent play about
executed murderer Karla Faye Tucker. Following his own struggles, including prison time for drugs
and a successful rehabilitation, Earle’s songs have grown in subtlety, eloquence, and, yes, empathy.

Just an American Boy celebrates Earle’s courage yet also implies such
activism should be a logical response to modern-day madness, raising the question, Why aren’t
more artists following his lead?