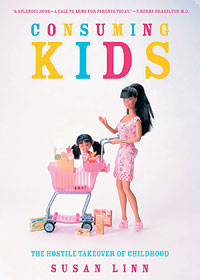 All too often, media discussions of children swing between vague pieties
(“The children are our future”) and shrill hysteria (“A nipple! Children saw a nipple!”). Thankfully,
Susan Linn — who was mentored by Fred Rogers and teaches psychiatry at Harvard Medical School — avoids
pious scolding in Consuming Kids. She provides instead a measured, but ultimately devastating,
critique of consumerism and American childhood.

Children influence some $600 billion in annual spending, and marketers,
as Linn amply documents, will stop at nothing to harness this kiddie-consumer juggernaut. Of the
head-shaking stats and anecdotes Linn supplies, perhaps the most repulsive is the “nag factor
study,” which identified the parents most susceptible to “pester power,” whose kids thus make
the most profitable advertising targets.

Linn admirably refuses to soft-pedal the complexity of the issues involved.
She is well aware, for example, that any attempts to shield children from the “marketing maelstrom”
will butt up against free-speech concerns. But those battles have already been won in parts of Europe
and Canada, and need to be fought here: The problem is “not just that kids are consuming,” she concludes.
“They’re being consumed.”