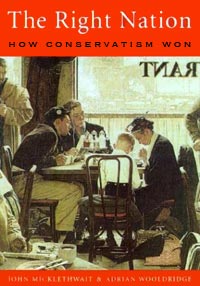 Approach this book with caution, fellow progressives. It may confirm your worst fear. Two smart Brits who work for The Economist have written a vividly detailed study of why conservatives rule American politics. What is worse, they maintain that the right is likely to dominate for some time, even if the Democrats eke out a victory this fall.

The Right Nation has nothing in common with the crude polemics by the likes of Bill O’Reilly and Ann Coulter that growl from racks at every airport and mall. Micklethwait and Wooldridge gaze on their American subjects with the skepticism of European agnostics who’ve grown up in a tidy welfare state. The moralism of the evangelical right makes them shudder, and they mock the hypocrisy of a president who rails against “big government” but has blithely run up a record deficit. A keen grasp of history and demographic trends firms up their prose, which is spiked with the dry wit that seems the birthright of every Oxford graduate. Many Republicans, the authors report, believe high deficits will prevent liberals from enacting future social programs. That logic “is rather like saying that, because your brother-in-law drinks too much, you’re going to drink all the alcohol in the house before he visits for the Memorial Day weekend.”

All this frames an argument that the most confirmed W-hater should take seriously. In their view, three simple reasons explain why conservatives keep defeating the left: The right wins the battle of ideas, has a more determined and focused army of activists, and is reaping the benefits of long-term changes in American society.

The unlikely figure of William Jefferson Clinton proved an expert witness to the ideological sway of his opponents. “The era of big government is over,” declared the only Democratic president to win re-election since FDR. Clinton accomplished two historic feats that conservatives had long demanded—a balanced budget and punitive welfare “reform.” But his grand liberal dream to provide every American with medical insurance was a spectacular flop. Do you want a health care system run like the post office? asked the pitchmen for the right. It’s a myth that federal largesse goes mainly to lazy and immoral Americans—or ungrateful foreigners. But, after decades of skillful propaganda, most Americans believe this. The golden era when Congress created Medicare and Medicaid, not to mention the National Endowment for the Humanities and the EPA, seems to belong not just to an earlier century but to a different nation.

The men from The Economist appreciate how diverse is the cadre responsible for this sea change. At the top, of course, are white guys in expensive suits, men like Ralph Reed and William Kristol familiar to anyone who watches a Sunday morning talk show. But the authors also introduce pro-life college kids from Colorado Springs who believe conservatism is a benevolent creed, and they identify the many women in Bush’s inner circle who’ve enjoyed the support of right-wing foundations. Rich conservatives, the authors point out, don’t really donate more money than do their liberal counterparts in New York and Hollywood. But they target nearly all of it to projects whose sole mission is to advance the right’s cause.

The authors’ claim that the future smiles on conservatives is more dubious. Micklethwait and Wooldridge show that people who own stocks and homes and attend church tend to vote Republican, and those indicators are rising. Yet, if one deletes piety from the equation, Demo-crats do just as well. Latinos are the wild card in such electoral predictions. The authors predict the upwardly mobile and U.S.-born will shift toward the GOP. But most Latinos toil at working-class jobs and will probably do so for years to come. They are a natural constituency for progressives—if, indeed, the left can take its doctrine of social equality to heart.

And there’s the rub. The left can’t control demography, but it can build a smarter movement. In 1970, John Mitchell, Nixon’s leading henchman, said, “This country is going so far to the right, you are not even going to recognize it.” With zeal and an eye for liberal soft spots, conservatives set about fulfilling his prophecy.

Meanwhile, the left fragmented into a variety of worthy causes—from environmental defense to gay and lesbian rights to affirmative action. These fragments have helped make the United States a more humane place. But they forgot that the first rule of democratic politics is to state a few forceful ideas and to make clear how they can benefit the majority. Even Americans who despise the right know exactly what it believes: “family values” and “less government.” Since 9/11, conservatives have added the defeat of “Islamo-fascism” to the agenda. Can progressives unite behind ideas of similar clarity and appeal? Can they rid themselves of a nagging contempt for the unhip, the poorly educated, and the God-fearing? If the left is not a movement of and for working people—blemishes and all—then it has little chance to regain its previous influence.

Micklethwait and Wooldridge conclude their immensely valuable book with a sobering prediction. If Kerry wins, they write, “he will be reduced to trying to reconstruct the status quo ante, cutting back on tax cuts for the super-rich and repairing relations with foreigners (up to a point), but generally coping with an agenda dictated by the right.” Such a future is not inevitable; as John Mitchell knew, history often has a surprise up her sleeve. But if progressives want to prove the right wrong, they’ll have to stop boasting about how enlightened they are and start winning over the heart of America.