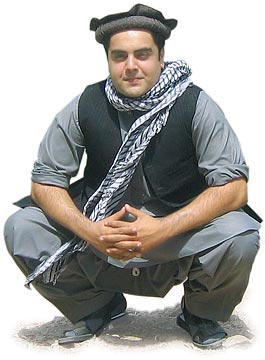 Said Hyder Akbar was living a pretty ordinary suburban California teenage life when the U.S. invaded Afghanistan in 2001. But when newly installed president Hamid Karzai beseeched Hyder’s dad, Said Fazel Akbar, to give up running a hip-hop clothing store in Oakland and help him run Afghanistan, the then-17-year-old Hyder decided that he, too, would return to the country he hadn’t seen since he was an infant. As it happened, radio producer Susan Burton had recently interviewed Hyder and his father about the assassination of Abdul Haq, a legendary warrior who was the rough equivalent of Hyder’s godfather. Burton gave Hyder quick lessons in what makes good radio, and over two years they collaborated to make two “This American Life” documentaries and now a book, Come Back to Afghanistan: A California Teenager’s Story. Because his father served as Karzai’s spokesman and later as the governor of Kunar province, Hyder had unbelievable access: a front-row seat to assassination attempts, prisoner abuse cases, and Afghanistan’s slide into what he calls a “narco-mafia” state. Through Hyder’s teen sensibility—he likens seeing the loya jirga to having an all-access pass to Lollapalooza—and his ability to navigate between two worlds, Afghanistan’s tribal rivalries and customs are made comprehensible, while American habits and military mores are revealed to be bizarre. —Clara Jeffery

Mother Jones: On your first trip back, you refused to get shots or avoid food and water that made you sick. What prompted that?

Hyder Akbar: The yearning to be Afghan, to be part of the country, part of the land. So it helped me separate myself from the casual traveler and claim my Afghan identity, and on the other hand I was, like, 17.

MJ: Did you also want to face the suffering your countrymen had experienced?

HA: To understand Afghanistan, you have to face the stress the average Afghan deals with. Part of it also was, you know, teenage bravado, and wanting to see if I can handle myself. After I was in an ambush, my uncles were happy—it was almost like a baptism.

MJ: While recording the ambush, you said, “I think this is overall a positive experience. That may sound insane.”

HA: It’s good to have those experiences under your belt in places like Kunar. It gives you a little more legitimacy and prior experience. I don’t want to make too much of this, but it’s kind of on-the-job training.

MJ: You describe your disillusionment with political infighting and Karzai’s working with warlords. Did your dad vet the book?

HA: He encouraged me to be honest, because he thought it was important for people to know. Most of his suggestions were more about my own personal security than about offending people. I remember one time when I was taping in the presidential palace, and the president of Iran was coming to see Karzai and also Ismail Khan, the governor of Herat…

MJ: And a famous warlord…

HA: And I made a joke about his allegiance to Iran. Afterward, my dad was pretty mad: “What were you thinking, making comments like that in front of a bunch of people?” But mostly he trusted me a lot.

MJ: Far more, it seems, than most American parents trust their teenagers.

HA: I don’t know how much of that is Afghan culture and how much is just our personal thing. My mother’s, like, motherly instincts come through at times, but my father basically treated me as an adult. Once I was about to go to a battle zone, and the Americans were like, “You shouldn’t go,” and my mom was like, “No way, you can’t go.” And my dad was like, “He’s 19 years old, he can do whatever he wants.” So there was an element of my father trying to get me ready—without getting too sentimental about it—in becoming a man.

MJ: What was it like to be so separate from women, except those in burkas?

HA: It was worse for me than for a normal Afghan, because at least when they come home there’s a significant female presence. I was in a hotel with my father and maybe my uncle. In a male-dominated environment, things are very macho, and you can’t show weakness…. It would be very hard to bring a wife to Afghanistan. In America, I’d have no problem with her doing whatever she wanted, but in Afghanistan, that’s not the case. Sometimes I have to be artificially more conservative than where my heart really lies, just to be able to return and do what I want to do.

MJ: Do you worry about that? Being able to reconcile your romantic life…?

HA: [Laughs.] I’m only a junior! I’m sort of betting on the situation improving by then. It’ll be difficult, not just in my romantic life but in every part of my life.

MJ: You acted as a translator for U.S. forces. Would they have trusted you if you didn’t have a flawless California accent? If you couldn’t discuss fantasy football and U2?

HA: It definitely helped. Sometimes, before I said something that made it obvious I’m from America, the Marines literally could not fathom the idea. They would think that I’d been to some kind of accent school.

MJ: Yet some things weren’t translatable.

HA: The Americans don’t understand that when 2 million people have died in a civil war, emotions tend to be a bit stronger than in America. They’d say: “Why can’t you get along? We get along. Democrats and Republicans don’t like each other, but they don’t kill each other,” or “You don’t shoot a cop to get out of a ticket.”

MJ: When it’s not, I don’t feel like paying a ticket, it’s that this cop killed my brother and now, under U.S. auspices, is extorting me.

MJ: You had a front-row seat to a notorious prisoner abuse case, in which CIA contractor Dave Passaro is alleged to have beaten an Afghan, Abdul Wali, to death.

HA: Wali had been accused of rocket attacks. So we set a time for him to turn himself in to the Americans and explain. My dad sent me along because Wali’s family had heard stories about Americans and torture. My father said, “The Americans don’t do those kinds of things, not like the Russians.” But I couldn’t keep translating for Dave because he was getting very aggressive.

MJ: And you weren’t sure if he was doing good cop/bad cop or really was a bad cop.

HA: He was a big a-hole. Three days later we got a call that Wali had passed away. Dave will be tried this winter and I will testify.

MJ: As horrible as you and your father felt, you put it in perspective because…

HA: These kinds of stories are pretty common, especially during the Soviet era, when at one jail they’d kill 27,000 people. Afghans would rather people pay attention to what Pakistan and the Taliban are doing, but nobody gets excited about a low-level insurgency. It’s enough to keep Western NGOs out, but not enough to keep the attention of Western media.

MJ: Do you feel that Afghanistan has been abandoned by the U.S.? By the media?

HA: Definitely by the media. Especially in comparison to Iraq. Which is unfortunate because Afghanistan could be successful, and I’m not so sure about Iraq. Iraq is going to be turned into a face-saving thing, while Afghanistan slips out of their control.