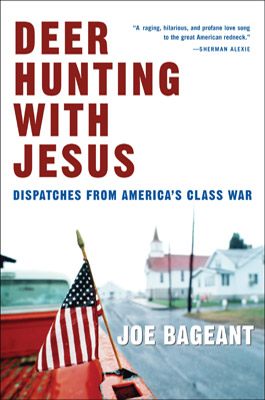 Deer Hunting With Jesus takes Thomas Frank’s dazzlingly smart 2004 book, What’s the Matter With Kansas?, to the next level. Like Frank, Joe Bageant writes about his home state (Virginia) and his native tribe (“Scots-Irish mutt people”) and shows how working folks (“our cheap, ass-busting, anti-union redneck labor force”) got bamboozled into voting Republican. But Bageant writes with the ghosts of Hunter S. Thompson, Will Rogers, and Frank Zappa kibitzing over his shoulder.

One of a snake-handling, fundamentalist, backwoods clan rooted to the same ground in northern Virginia for 250 years, Bageant was born again—thanks to sex, drugs, and rock and roll—as a writer, freethinker, and pinko Democrat. He roamed for years, but came home to write this guided tour of the world he grew up in. From the church where his brother preaches in tongues to the Rubbermaid plant that employs half his hometown, Bageant uncovers harsh lessons about how liberals failed the people who do society’s grunt work, as well as fight our wars, and wind up with nothing to show for it but a broken-down trailer in foreclosure. They’re bitter as hell, but they “vote Republican because no liberal voice…that speaks the rock-bottom, undeniable truth, ever enters their lives.”

Bageant’s dead serious and damned funny, a prince of trenchant irreverence. In chapters with titles such as “The Deep-Fried Double-Wide Lifestyle,” he despairs over his benighted brethren but loves them fiercely and wants justice for them. Enough fine Southern-style storytelling for 10 volumes is distilled into this fantastically readable ex-planation of why working-class America has given up on liberalism. Winning it back, Bageant writes, means liberals “are going to have to pick up this piece of roadkill with our bare hands.”