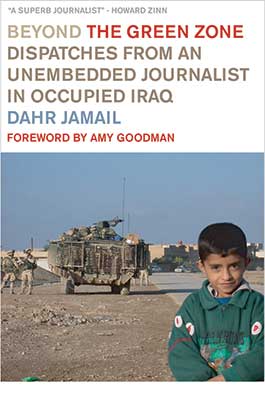 Every conflict spawns a handful of journalists who are willing to not only brave the war zone but to seek out the stories ignored by the press pack. The Iraq War has brought us Dahr Jamail, a gutsy neophyte (and occasional motherjones.com contributor) who traveled to Iraq to tell the stories of civilians under fire. His new book, based on his reporting between 2003 and 2005, presents the unvarnished voices of ordinary Iraqis—voices of anger, anguish, defiance, and, miraculously, hope—that have been largely missing from mainstream reportage.

The book’s centerpiece is the April 2004 siege of Fallujah, which Jamail witnesses firsthand, arriving in the city as it is bombed and strafed by American aircraft. Jamail, who doesn’t speak Arabic and whose previous experience was as a volunteer rescue ranger, goes where most reporters can’t—or wouldn’t. He meets the head of an overwhelmed clinic whose ambulance driver was shot by U.S. troops who had inspected his vehicle and found it empty, leaving wounded civilians stranded. “For all my life I believed in American democracy,” the medic tells Jamail. “Now I see it has all been lies. The Americans don’t give a damn about democracy and human rights. They are worse than Saddam.” Unaffiliated with a major news organization or the U.S. military, Jamail describes scenes that can’t be reported from inside an armored Humvee, such as the jubilant reaction of crowds after the Marines, their embedded journalists in tow, pull out of the smoldering city. And he reports what his colleagues refused to, such as evidence of an Iraqi being tortured in American custody long before the Abu Ghraib scandal broke.

Beyond the Green Zone is an important book for understanding the suffering wrought by American occupation in Iraq. I suspect Jamail’s account will prove an enduring document of what really happened during the chaotic years of occupation, and how it transformed ordinary Iraqis. To paraphrase one of the Vietnam War’s finest correspondents, Gloria Emerson, writing about Jonathan Schell’s exceptional accounts of that conflict: If, years from now, Americans are willing to read any books about the war, this one should be among them. It tells everything.