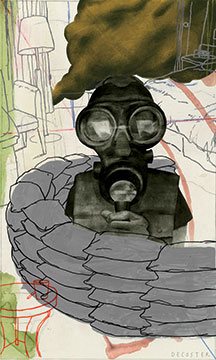 near the end of beowulf, there is a scene that may be the earliest description of war reporting in the English language. The eponymous hero lies dead on the battlefield with only faithful Wiglaf remaining at his side. This is bad news for the Geats: It spells the end of Beowulf’s era of protection and means years of affliction at the hands of their enemies. Nevertheless, Wiglaf summons a rider and orders, in Seamus Heaney’s brilliant translation, “the outcome of the fight to be reported” from a high cliff so all can hear. The messenger accepts the onerous task and earns the poet’s praise, because “he told the truth / and did not balk, the rider who bore / news to the cliff-top. He addressed them all.”

A terminal at New York’s Kennedy Airport may seem like an odd place to be contemplating Beowulf, but as I sat watching the images flit across the frenzied television screen, high above my head, I couldn’t help thinking of Wiglaf’s weighty charge. It was June 2, 2007—a day long since forgotten in the churn of the never-ending news cycle, but at that moment the airwaves bristled with reports of the “jfk bombers,” who had been caught red-handed while hatching their plan for a terrorist attack “worse than 9/11.” The television showed long security lines snaking through the outer terminal, armed guards in riot gear manning the screening stations, and handlers with bomb-sniffing dogs probing every corner and alcove.

The problem was that none of what the TV showed was actually happening. The terminal was quiet, calm, overtaken by the usual lassitude of travel, but nothing more. In fact, it took longer to get a stromboli in the food court than it did to have my bags checked by tsa. Still, I pulled up the cnn website and found more of the same: a long line of passengers looking harried and worry worn. Below this picture, however, was a tiny credit line that read “File photo.” These images of airport chaos were leftovers from some previous crisis—maybe from August 11, 2006, when a foiled bomb plot in the United Kingdom really did cause trouble at jfk, or just as likely from this past March, when the terminal was packed with passengers held hostage by nothing more sinister than an unexpected spring snowstorm.

Defenders of the media have long posited that showing stock footage and file photos is simply part of the language of modern journalism and that savvy viewers understand it as a subdialect of truth. If this isn’t exactly what’s really happening, the rationale goes, it is at least a rough approximation. There’s no direct fakery, no outright lying, just a clever sleight of hand to make up for a lack of current footage. Unfortunately, the compromise of “good enough for now” has steadily shortened to “good enough, period”—and it has had a corrosive effect on the way all news is reported.

Consider, for example, the case of Sarah Chayes, npr‘s correspondent in Kandahar in late 2001. Early in her memoir The Punishment of Virtue: Inside Afghanistan After the Taliban (released by The Penguin Press in paperback in June), Chayes explains that a “reporter’s first imperative upon landing in a beat is to develop ‘sources,'” and hers was “a small-time commander” with Gul Agha Shirzai’s militia named Mahmed Anwar. He told Chayes about an astonishing battle that he had led for control of the Kandahar Airport, and, she explains bluntly in her book, “I relied on him for my account of it.”

Her report aired on npr over ambient recordings of Afghan fighters gathering weapons and supplies from a captured stronghold, while Chayes solemnly intoned, “Anwar says he lost 55 men during the final assault on the Kandahar Airport, where many Al Qaeda fighters were dug in. He says they detonated a huge explosion just as his forces attacked, killing 250 of their own fighters, a suicide defense, says Anwar. The bodies were only collected for burial today.”

Nearly five years later, Chayes was interviewed by Melissa Block on “All Things Considered” about the incident and admitted that there was one nagging problem: It didn’t happen. As Chayes had written, “The vaunted ground battle at the airport never took place. It was part of the fiction Gul Agha was concocting—with tacit U.S. approval, I came to understand—to secure his future reputation.” A fiction, Chayes neglects to adequately ponder, that she reported as fact. She didn’t ask to see the bodies of the 250 dead Al Qaeda, didn’t ask to see the blast hole from the explosion. Instead, she recounted one person’s story, without an effort to corroborate or discredit his version of events. In so doing, she served the ends of an Afghan warlord and the American handlers hoping to prop him up with fake tales of bravery. Yet Chayes remembers wistfully that her source “pulled my leg with a charming shamelessness back then, recounting the events not as they had actually transpired, but as Shirzai and his American advisers wished people to think they had.”

At least Chayes can claim to have been misled; no such justification can be offered in defense of Fox News, according to a stunning new book, Whiskey Tango Foxtrot (forthcoming from University of Chicago Press in November), by Iraq war photographer and reporter Ashley Gilbertson. Gilbertson describes how he and another reporter were nearly blown to pieces by an errant Air Force bomb in northern Iraq in the late days of the American invasion. They finally withdrew from the front because, as Gilbertson himself concedes, “The risk was too high, the payoff too low.” And yet when he returned to his hotel in Erbil, he switched on the television and found Fox’s correspondent “crouching in front of sandbags, wearing a flak jacket and a helmet. He was supposedly on the front lines, reporting via a scratchy video phone. He had to whisper, he said.” But as Gilbertson studied the screen, he could discern, over the correspondent’s shoulder and above the sandbags, the “distinctive architecture of our hotel.” Fox’s man in the field was reporting live from a foxhole he had built in his hotel room. The outraged Gilbertson dialed the correspondent’s in-house phone and then hung up, allowing just enough time to send a single ring over the airwaves.

The incident with the Fox News correspondent might seem funny—like the Daily Show correspondents mugging in front of a green-screen projection of Baghdad—if it weren’t so successfully outstripping the satire. “Television reporters rarely travel from their hotels,” Gilbertson writes. “Often when a network cuts ‘live to Iraq,’ the reporting is from the network’s permanent spot on a Baghdad hotel rooftop.” There are exceptions, he is careful to note, “but on the whole, television crews are too busy doing ‘live updates’ to actually go out and report.”

Thankfully, we have writers and photographers like Gilbertson, now working primarily on contract for the New York Times, who have not given up on the idea of real reporting. The photographs in Whiskey Tango Foxtrot convey a clear-eyed fidelity to the facts. They include pictures of corpses and bleeding soldiers, pictures of officers practicing golf swings and enjoying saunas, and pictures of incarcerated prisoners and brutal interrogations. The lurid and the ludicrous share equal space, often to dizzying effect. The text is refreshingly direct and self-deprecating—whether revealing Gilbertson’s embarrassment at wetting his pants under fire or his agony and post-traumatic stress after being splattered by the brains of the man in front of him on a patrol. This is the kind of reporting we so desperately need: free of false bravura, free of agenda, free of inflated urgency. Whiskey Tango Foxtrot may lack the panoramic scope of George Packer’s The Assassins’ Gate or the impassioned critique of Thomas Ricks’ Fiasco, but Gilbertson gives us something simpler, more essential, and, I think, more needed. He shows us personally and incontrovertibly what it has been like for him coming of age in Iraq during the last five years.

For this reason, the book belongs less with other histories of the war than on the same shelf with Hemingway’s A Farewell to Arms and Vonnegut’s Slaughterhouse-Five. This is not trumped-up news coming live from Iraq but the straight story with harrowing snapshots of the American soul. When future generations look back and wonder where we went wrong, where we failed ourselves and them, it will not be hours of television and radio broadcasts that they pore over. It will be a select few texts, and Gilbertson’s book deserves to be one of them. He has accepted his charge and climbed the cliff-top. He has told the truth and does not balk.