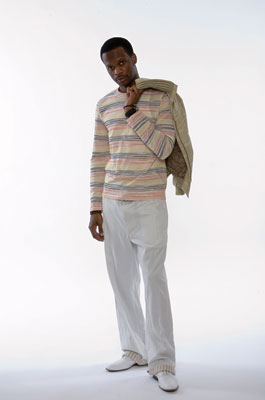 In 1941, Preston Sturges released Sullivan’s Travels—a classic film about an earnest Hollywood filmmaker who goes undercover as a hobo. With his new documentary, Skid Row, Pras Michel—best known as one-third of the Fugees—lived out Sturges’ fictional experiment. Michel spent nine days on Los Angeles’ Skid Row, hidden cameras tracking him as he panhandled, dodged rats, watched a junkie shoot up, and slept in a doorway after his tent was stolen. It was a long way from the world he’d grown used to. Michel introduced Lauryn Hill to Wyclef Jean and put the Fugees in motion; the trio’s 1996 album, The Score, is one of the best selling hip-hop albums ever. He’s kept busy since the group split; he’s been in numerous movies, and his latest album, Experience, is due out this fall. But the 34-year-old found that once he went from the rope line to the soup line, he could move among the dispossessed with relative ease. Only once did someone say, “You look like Pras!” —Alan Light

Mother Jones: How did the idea for the movie come about?

Pras Michel: About three years ago, I was playing Scrabble with some friends in L.A. One of my friends lives a couple blocks away from Skid Row, and he started talking about it. First we thought about just going in there, talking to people and documenting the whole thing, but that was gonna be boring. We thought it wouldn’t be effective unless someone really experienced it. So we wanted someone to go inside, but we couldn’t find anyone. Then last year, after the last Fugees concert, which was also in L.A., he said I should just go in and do it, since I was the unlikeliest candidate. I said okay—but we had to do it right then because I had two movies coming up, and that was the only window I had. And it just snowballed from there.

MJ: Why did you use hidden cameras?

PM: We wanted to shoot the reality of what’s going on down there. We did a test shoot, just to see what it would look like, and we got so much resistance that we knew we had to change our plans. People don’t want to be seen in that situation. So that’s why it’s real and in your face; we didn’t have time to plan and map it all out.

MJ: What about this experience surprised you the most?

PM: I didn’t expect to see so many people living there that aren’t mentally ill. It’s shocking how many regular people there are where something happened to them, or just bad luck. You think they’re all lazy or they’re crazy or messed up, but it’s not the case.

MJ: Do you think people actively make the decision to become homeless?

PM: It is shocking to see so many people who say that they’re there by choice. It makes you think some people just give up on society. But no matter what they say, who really wants to be in that situation? You may not want to be the president or be the ceo of aol or whatever, but who really wants to live like rats?

MJ: What did you learn about yourself from your time on Skid Row?

PM: We’re all accustomed to how we live, and you say, “Oh, I’d never do this or that.” But you don’t know what tomorrow brings and how you’re going to react. There were certain things I did that I said I would never do—”I’m not going to sleep on the sidewalk” or “I don’t urinate in public”—but then you’re in a situation where you have to survive. When you live a civilized way of life, to go back to the lowest common denominator, it just becomes basic survival. The reality sank in: I needed food, and I started to adapt more and more to the environment, like Donnie Brasco.

MJ: You admit that you don’t really know how to solve this growing problem. But what would you like people to take away from Skid Row?

PM: It could be as simple as the next time someone homeless asks you for a quarter. If you say, “No, I can’t,” they understand that, but when you ignore them they start to feel like being homeless is a disease. It’s not a disease; it’s a condition. So even just something as small as acknowledging them. Hopefully, the film will stir up some dialogue. No one cares about anything unless it affects them. I think in the next two, three years, people will really understand how deep the homeless situation is—there’s the whole immigration issue, the shrinking of the middle class, the extremes between rich and poor. There’s always a poor element, but not to this extreme. When you have more people going into poverty, the next step from there is homelessness.

MJ: The Fugees was one of the last hip-hop groups that was socially aware and also popular. What do you think of the current state of hip hop?

PM: Hip hop is going through its disco era right now—remember all those disco albums that had one good song and everything else on them was trash? Everybody is just thinking about front-loading records to get that one hit. But out of chaos comes order. There’s a lot of artists out there pushing envelopes, getting more creative, and those are the ones who are going to win.