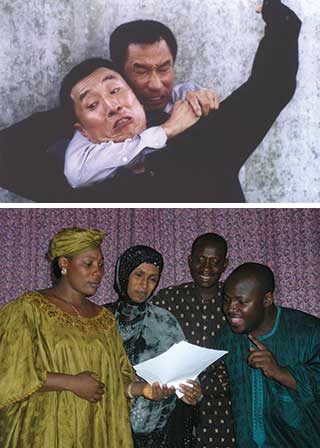 In 1977, the Mexican soap opera Acompáñame (Come With Me) introduced viewers to three sisters growing up in Mexico City amid all the hallmarks of a classic telenovela—infidelity, histrionics, and lurid plot twists. But its characters also tussled with grittier problems such as birth control. The show, which lasted just nine months, was credited with triggering a 23 percent jump in contraceptive sales and encouraging more than 500,000 women to visit family-planning clinics. The melodrama with a message was born, inspiring other socially conscious tearjerkers around the globe:

La Decisión (The Decision) “Fotonovela” in the New York subway, 1989-2001
plot: Julio refuses to wear a condom, so his girlfriend Marisol dumps him. But when people around him contract hiv, he sees the light.
impact: The city health department’s most successful ad campaign ever. More than 2,000 people wrote in to ask for more information or suggest story ideas.

Gugar Goge (Tell It to Me Straight) Radio soap, Nigeria, 2006-2007
plot: 12-year-old Kande’s evil stepmother takes her out of school and marries her off to an older man. She gets pregnant, her baby dies, and she develops an obstetric fistula.
impact: Surveys at health clinics found that a third of reproductive health patients and more than half of fistula patients said the show convinced them to seek treatment.

Ashreat Al Amal (Sails of Hope) Radio soap, Sudan, 2004-2006
plot: Al Shoul, a midwife who performs female genital mutilation, loses her own daughter during a botched cutting ceremony. She goes crazy and drowns herself.
impact: Opposition to fgm doubled after the series aired.

No Smoking Bollywood thriller, released October 2007
plot: When narcissistic businessman K’s wife walks out in disgust at his cigarette habit, he checks into rehab. Features a show-stopping song-and-dance number with the chorus, “As the cigarette is burning, I am too!”
impact: Leading man John Abraham and director Anurag Kashyap—both chain-smokers—hope viewers will kick the habit.