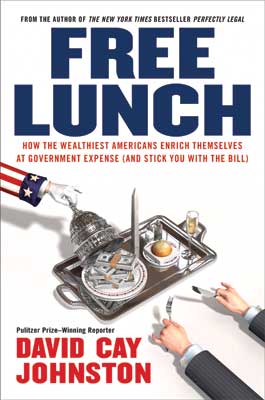 For its first 280 pages, the new exposé from this Pulitzer Prize-winning New York Times reporter is an engaging look at how the superrich consistently—and outrageously—rely on public handouts while preaching about free markets and wasteful entitlement programs all the way to the bank. The villains in David Cay Johnston’s tales run the gamut from railroad executives to sports-franchise owners to hedge-fund managers, all joined by a willingness to take enormous sums from public coffers while providing little or nothing in return.

Take former Treasury Secretary John Snow, whose csx railroad saved billions by skimping on maintenance; when there was a fatal crash, taxpayers footed the bill. Before entering politics, George W. Bush ran a money-losing baseball team, but ended up millions of dollars richer by getting a government-funded sweetheart deal on a new stadium. Retail chains like Wal-Mart win property-tax breaks and then squeeze out local businesses that pay their fair share. The free ride has become business as usual, but Johnston sees it for what it really is: cheating.

Free Lunch fizzles in its final chapter, where Johnston lays out some unconvincing solutions. He proposes “politician finance reform”—giving members of Congress all the money they want for dining, travel, and entertainment so they can’t be tempted by their wealthy friends. Yet the end of Abramoff-style golf junkets and free box seats would do little to curb the influence of major campaign donors. Johnston’s final appeal to handout-hungry ceos to “ask themselves how much they are willing to sully their reputations” feels naive, too. It will take more than a call for self-restraint to derail this gravy train.