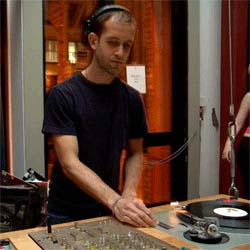 Anchored by the current EMP exhibition, American Sabor: Latinos in U.S. Popular Music, the event was titled “Shake, Rattle: Music, Conflict, and Change,” and featured more than 160 presenters across some forty panels from April 10-13.

Presentation topics ranged from music and the war in Iraq, youth struggle from Sierra Leone to Colombia, Bob Marley, the anti-nostalgia of grunge, to John Mayer’s “Waiting on the World to Change.”

Mother Jones spoke with Tomas Palermo, a Bay Area DJ and Wiretap managing editor who attended the event and was a featured panelist for a discussion called “From Nanny to Ninjaman: The Role of Revolution in Jamaican Music & Society.” WireTap is a Webby-winning news and culture magazine by and for young people interested in social change.

Mother Jones: You spoke at this year’s Pop Conference, which was titled: “Shake, Rattle: Music, Conflict, and Change.” What was the overall vibe like?

Tomas Palermo: It was for papers and presentations looking at the role music plays in changing society. Papers had been written by PhDs and university music department staff types to experienced journalists, authors, and music blog commentators. Blogolians, I like to call them. The vibe was very exciting because issues of race were at the forefront, and multiple papers and presentation dealt with race.

TP: One panel discussion was Black Web 2.0, which discussed whether all the changes taking place online with music are actually empowering African Americans in a new way, or is it the same old situation of blacks being relegated to an entertainment role, as opposed to an entrepreneurial role.

TP: It was unveiled the ways that music is being marketed in increasingly more perceptive and deceptive ways. Like the Kanye West website. He has a search engine on the site but it only finds things that have branding or commercial tie-in with Kanye. A beverages search only comes up with beverages Kanye has a deal with. Also, ads on site are embedded everywhere. You can’t escape it.

MJ: You said the overall vibe was exciting. How so?

TP:There was quite a but of camaraderie among panelists, and extended conversations afterward. The nature of the material presented propelled animated discussion. It’s important to mention that the EMP museum was doing a major exhibition called American Sabor: Latinos in U.S. Popular Music, which was about the impact of Latin American music in America. A third of presentations dealt with some aspect of Latin music.

MJ: Did you feel like there was ample space for new, young voices and perspectives at the conference?

TP: This was anything but traditional, in terms of examination of social and cultural issues. There were like three or four papers on bob Marley alone. Marley and colonialism, for example. One in particular looked at Marley and liberation movements, and how his music has been adopted by so many movements, and it was something he spoke about so prominently. For example, Marley did a concert in Zimbabwe at its independence in 1980, and his music was also influenced by or connected to African liberation movements in Angola, Tanzania, South Africa, etc. It’s a subject not always discussed when talking about his life.

MJ: Was there any debate about music’s specific role in change?

TP: What came up is that music has always been an important conduit in transmitting messages of the left and far left, as well as marginalized people. For instance, there was a paper that traced the origins and demise of disco. It charted disco music through its origins in the black and gay underground scene, up through the excess of Studio 54 and its ultimate co-option as euro-disco.

TP: There was discussion on the sounds of the 1960s far left, like music, voices, speeches, noise, recordings, and what role that played in the Weather Underground for example.

MJ: How did sounds play a role specifically with the Weather Underground?

TP: Well, same as today, people recorded speeches and events, and made records of those recordings, and those records were distributed. Some poems, speeches, and sounds were put to music, or sometimes left as raw sound files. The discussion was about how those sounds solidified and spread the message of that time.

MJ: Were there any more mainstream, pop-music discussions?

TP: For sure. There were papers on Elvis, Jimmy Rodgers, and Sam Cooke. With both Rogers and Cooke, people discussed their role in civil rights, and politics, and the way they played their music, and mainstream pop in general.

MJ: What was the most popular event or discussion?

TP:They got 6-10 paper submissions just on MIA alone. They only took one, though. One thing that stood out to me was a round table on all-ages music venues. Everyone on the panel ran an all-ages space, and talked about how to spread their ideals and practices around. They discussed solutions to problems facing those venues, like how to be a long-term place, instead of just a fly-by-night venue, and ways to get through the dense zoning and city government process.

MJ: What else stood out to you?

TP: The people I encountered. They were all extremely well-rounded, knowledgeable, and passionate music fans. They were open-minded about nearly every style and genre of music, from the most obscure British genres like dub-step to broad categories like reggae and rock and roll. There was so much discussion about music by people of color, and lots of inclusion of journalists of color, that it was really refreshing, They were not the majority, but well represented.

MJ: What was biggest let-down of the conference?

TP: There could have seen more people there filling up seats. They probably could do a better job recruiting people to come.

MJ: What did the event motivate you to do, or write about?

TP: Me personally, I took a macro approach to the topic of reggae and revolution. But other presenters there brought into focus that there are several micro revolutions within reggae that deserve more attention in debates like this. I heard a discussion on how dancehall became the form it is today, which is very carnivalesque. The speaker discussed The Caribbean Basin Initiative (CBI), which Reagan brought about, almost like a pre-NAFTA type of agreement, that sought to consolidate the Caribbean economy with the US, and exclude those friendly with Cuba or Cold War nations. It dawned on me that not enough has been written about music produced in Jamaica at that time.

MJ: What else did you leave thinking about?

TP: There is a need for more events that look at the role of conflict and change and politics play within the music sphere. The more you talk about it, the more it becomes relevant. Right now, American music in particular can use a reminder of that. It used to be a lot more political that it is now.