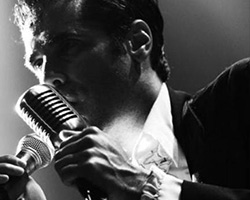 No, the members of DeVotchka are not from faraway, Eastern European lands. Their name is derived from a Russian word for “little girl,” but the musicians are from Denver, Colorado. For a decade they’ve played their mix of Eastern European, Southwestern, South American, American roots music, punk, polka, and folk in dive bars and at burlesque shows. Over the years, a genuine, instantly recognizable sound has evolved; a sound that is haunting, sweeping, celebratory, and romantic.

The Academy Award-winning film Little Miss Sunshine featured DeVotchka music prominently, for which the band was nominated for a Grammy. The Everything is Illuminated trailer also features one of their songs. The music label Anti- released their newest album, A Mad and Faithful Telling, in March.

At a recent sold-out performance at San Francisco’s Fillmore, people in the crowd danced, hugged, and swayed as the Slavic Sisters aerial act performed and DeVotchka charged through a set with violins, trumpets, an accordion, a sousaphone, and a Theramin. The band is touring the United States and Europe through September.

NU: I am totally fed up with the conglomeration of the media in the last few years. They just go to the same trough of the White House press release, scoop it up, and send it out to the masses. It’s just nice to run into some fucking truth every now and then, you know?

MJ: Have you been following the 2008 presidential election campaigns so far?

NU: There is this ground swell. I think maybe people are going to fucking vote, like maybe more than 50% of the people. I am excited about it, but it seems like more bullshit everyday, and it gets darker and darker, like we’re seeing the results of all the shit that’s been dumped on us for the last eight years.

MJ: Do you think people will vote, and that there will be big changes after the election?

NU: I think there will be change, and maybe we’ll have a few more Democrats in the Senate, but I just think it’s going to be the same shit. When are we going to cut back on the $6 trillion defense budget, when like 6% actually goes to military operations? Where is all that money going to? Defense contractors? It feels like the biggest scam there is. Instead of spending money on universal health care or improving education, we spend it on fucking missiles and shit. I think we could totally gut the Department of Education and give more money to schools, for one.

MJ: Will you vote?

NU: I like Obama, but I was more of a Dennis Kucinich fan, to tell you the truth. He was the only one who made any sense to me, the only one speaking about things really going on. He’s a great guy.

MJ: You don’t seem to explore politics too much in your lyrics, though. Why not?

NU: I try not to bum people out too much. I think my place is more to escape and focus on what’s good about everybody and what we all have in common.

MJ: You mentioned that you like to hear the truth. DeVotchka, to me, has a lot of truth to it as well. There’s a vulnerability and sensitivity to the music that is very prevalent. Where does that come from?

NU: I’ve never been able to fake it, or play something I’m not behind emotionally. I’ve always kind of had a problem with that. But that’s one of the great things about music and art; you have to get into it emotionally. And I found that a lot of the stuff that was inspiring me with my writing was heartbreak and sadness. It’s been the catalyst that brought out the music. But it’s using it as a tool to move beyond it. When things are falling apart is when you really realize that you’re alive, sometimes. A little heartbreak can make you realize how good you have it.

MJ: Anything in particular in your life, or your band members’ lives that’s been a specific inspiration?

NU: No, I think it’s just romance in general that influences us the most [laughs]. Everybody has it. I mean even in the middle of a war or a huge hurricane, pretty much in the top two or three topics of what’s going on in people’s lives is their romantic life. That’s sort of what’s always attracted me to music anyway. Most music is about that. There is a lot of great protest music out there, but mostly it’s about love.

MJ: Denver, your home base, has always struck me as more of a rock town. You seem like a band that would be from a different town.

NU: I grew up in New York, which I think had a lot to do with shaping my early exposure to multiculturalism, not that there isn’t that in Denver, too. But I know what you’re saying. But we’re really not a product of the environment. I see the world is getting smaller. I don’t think geographical stereotypes really hold true anymore, especially in America, which continues to be a giant melting pot. People are taken aback when we say we’re from Denver, but you know, I’m not the son of miners, I’m the son of Italian immigrants, so we had a strong kinship to the accordion, and the three-chord waltz, you know what I mean?

MJ: How do you describe DeVotchka’s music, and what’s shaped the development of that music the most?

NU: It’s always been a form of escapism. In the beginning, we’d be screwing around with these songs, and mentally they would take me away. Mentally, I’d start picturing either faraway places, or distant time periods. That’s what I’ve always loved. That’s what I’ve continued to mine in the music.

MJ: How does the band write songs? Do you typically start off with a guitar riff, or a melody, etc?

MJ: DeVotchka has a long history of playing burlesque shows. How did that all come about?

NU: We were playing around Denver, and I had always gravitated toward vintage fashions from the 40s and 50s, and that vintage sound. There was a large burlesque movement in Denver at the time, and it was a natural fit. They asked us to play, and we played for performers from all around the country, and then took the show on the road. We’ve always had a flair for drama, and a pension for instrumental interludes, so it was a perfect match. We became like a pit orchestra for these shows, and the audience was perfect for it. I’ve always been in love with the past. It always seems so much more romantic; everyone in their tuxedos and black and white photos, instead of this continuing, homogeneous culture today, I guess.

MJ: A new round of “world” or “gypsy” music has been gaining momentum for years now, at least in certain circles. What’s DeVotchka’s role in that?

NU: Ten years ago, we were considered a ridiculous, wacky band that no one would pay to see. But I saw from our first show that there was an audience for it. I think people are always underestimated what the audience will respond to. It’s not really a conscious thing for me. This is what we can do honestly.

NU: Our new album. It’s exciting to feel like we’re a part of it now. We’ve been outsiders for so long, and it was like, ‘hey look at us, we can actually play our instruments,’ but now we have people coming to shows and be interested in the music, and the songs are resonating with them.

MJ: Is that overwhelming, or do you embrace it?

NU: It’s exciting, and we definitely feel honored. But we definitely worked hard for it, so it’s not like a flash in the pan ego stroke. It’s an honor to be here. I’m approaching it with reverence and a little thankfulness.

MJ: How did being nominated for a Grammy affect the band?

NU: Well we didn’t win it, so I don’t know how much people totally cared about it. But it was exciting to think that this little band that started in someone’s garage got a Grammy nomination for an Oscar-nominated film. It made me think that were so many days that I could have screwed this whole thing up and we might not even be here right now. There were so many opportunities for me not to be here, that to be here is pretty great.