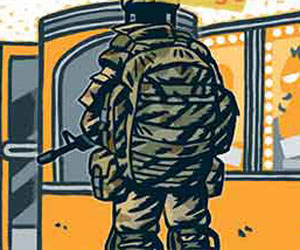 on february 26, Washington Post military correspondent Thomas Ricks logged on to an online chat to discuss the war in Iraq, only to find that the number of readers awaiting him had reached its lowest point since the war started. “Our little group of people who still care about the Iraq war appears to be dwindling,” Ricks wrote. Surveying the nearly empty chat room, Ricks offered a self-mocking take on the quote from Shakespeare’s Henry V that had inspired the title of Stephen Ambrose’s book about World War II paratroopers and the popular hbo miniseries based on it. “We few, we (un)happy few,” Ricks wrote. “We band of brothers.”

America’s profound disconnect from the Iraq War has been nowhere more evident than in Hollywood. Five years into the war, there has yet to be a truly memorable or defining movie about the conflict. The few major Iraq-themed movies—Stop-Loss, In the Valley of Elah, and Redacted—have tanked at the box office, and the indifferent reaction to these heavy-handed attempts at relevance seems to have soured the industry on the idea of trying to bring Iraq to the screen. The Lucky Ones, an upcoming film starring Tim Robbins as a recently returned vet, reportedly doesn’t include a single mention of the I-word. “If most critics use the word ‘Iraq’ in the opening sentence of their reviews, we’ll deal with it,” an executive at Lionsgate, the movie’s distributor, told the New York Times. “Do I wish they wouldn’t? Sure. But more than anything, I want them to write that it’s a good movie.”

Is it even possible to make a good movie about a war that’s still being fought? Americans’ battle fatigue only partly explains why Iraq films have flopped. Another reason is the way they have awkwardly shoehorned political talking points into soldiers’ stories. In Stop-Loss, an Army sergeant (Ryan Phillippe) returns from Iraq only to face an “involuntary extension” of his service. In the Valley of Elah was a meandering whodunit about a retired military policeman (Tommy Lee Jones) who tries to find his son, an Army specialist who goes awol after coming back from Iraq. Both were oddly hesitant about depicting the actual war, skirting battlefield images in favor of making statements. Director Brian De Palma’s Redacted tackled a real-life atrocity—the rape and murder of a 14-year-old Iraqi girl by American soldiers—but its combat scenes were ruined by its didactic approach.

Thankfully, the new hbo miniseries Generation Kill, which begins July 13, is neither squeamish nor ham-fisted. That’s not surprising, considering that its executive producers and writers are David Simon and Ed Burns, the creative team behind the acclaimed and sorely missed series The Wire. In seven one-hour episodes, Simon and Burns meticulously re-create journalist Evan Wright’s 2004 firsthand account of the Marine Corps’ 1st Reconnaissance Battalion’s six-week march to Baghdad in 2003. As might be expected, Generation Kill is violent, profane, and thoroughly engrossing.

In classic Simon style, the narrative unfolds with a deliberate pace that will be familiar to Wire fans yet frustrate casual viewers. Nearly the entire first episode depicts the bored Marines biding their time in Kuwait before war is declared. Still, Generation Kill ?has a shaky, nervous intensity; it feels as if you are in the Humvees with the Marines. There’s lots of realistic dialogue, peppered with references to sitreps (situation reports) and other military jargon, and a vast cast of fully drawn characters.

The Marines are mostly twentysomethings raised on mtv, South Park, and Grand Theft Auto. Corporal Ray Person (James Ransone, who played the squirrelly dockworker Ziggy Sobotka in season two of The Wire) is a stimulant-chomping, Ice Cube-quoting Humvee driver. The hulking Sergeant Rudy Reyes’ obsession with his appearance earns him the nickname “Fruity Rudy”; his buddies suggest that he become a gay porn star. (In a very Simon casting move, Reyes plays himself.) Towering above them all is the square-jawed Lt. Colonel Stephen Ferrando, a.k.a. “Godfather.” When Wright, portrayed as an awkward reporter, asks Ferrando how his voice got so scratchy, he explains that he had throat cancer. “You a smoker?” asks Wright. “No, just lucky, I guess,” croaks Ferrando.

What distinguishes Generation Kill from the Iraq films that came before it is its fearless portrayal of the Marines and the conflict itself. In the first episode, Person reads aloud from a letter that some schoolchildren back home have written to the 1st Recon, wishing for peace. To the delight of his fellow grunts, Person proclaims that “Peace appeals to tree-hugging bisexuals…War is the motherfucking answer.” That gung-ho spirit drives the 1st Recon as it rolls into Iraq, then battles its way through Nasiriyah and onward to Baghdad. As the Marines cross the desert, one scans the night sky, lit up by air strikes, and says with an awestruck gasp, “I wish I had some ‘shrooms.” When the 1st Recon zooms past welcoming villagers, one Marine yells out the window, “Thank you, vote Republican!”

The Marines’ chest-beating patriotism and video-game-bred detachment from humanity make Generation Kill more challenging to watch than The Wire, which gradually evoked viewers’ sympathies for underdogs like drug slingers and the stickup maestro Omar. “What’s cool about David is that he doesn’t care if you like these guys,” says Evan Wright, who contributed to the script. “But he does care if you understand them better.” Likability, Simon told me in an interview, is irrelevant because the Marines “are doing what they’re trained for. They’re not asking for forgiveness, and none need be given.” When they say something offensive, “there is no need for David Simon to get in there and start arguing with them.”

Just as The Wire accepted its characters’ flaws but not the flaws of the criminal justice, education, and political systems, Generation Kill is more interested in how the earliest days of the war revealed its fatal missteps, from the insufficient equipment to the blurry line between combatants and civilians. In an incredibly tense scene, an Iraqi boy is mistakenly shot during a pitched battle to take an airfield. When some Marines appeal to the Godfather to have him medevaced, he sternly rebukes them, saying that civilian casualties will get the same minimal treatment as wounded soldiers. “The standards here,” he barks, “are fucking zero.”

Simon insists he has downplayed his politics in Generation Kill. “I have very strong feelings about the war,” he told me. “But they do not belong in this piece.” Generation Kill‘s lack of overt political message sets it apart from the murky, message-driven, characterless plots of other Iraq films. The one belief that clearly comes through is Simon’s single-minded belief in the power of a good narrative to transcend all other considerations, from messaging to marketing. “In the feature film world it’s about, ‘Who is our audience?’ and ‘What are we trying to say to our audience?'” Simon says. “I don’t give a fuck about our audience. I believe in the story itself.”

Ultimately, Simon says, the main audience he wants to reach is the soldiers themselves. “Do they think that our work is fair and accurate in capturing those first six weeks to Baghdad? I hope that the core values of the piece are reflective of what these guys experienced.” When I spoke with him, he was preparing to screen Generation Kill ?for a group of 1st Recon vets in Los Angeles.

Simon is right to be concerned about soldiers’ reactions. Paul Rieckhoff, the founder of the Iraq and Afghanistan Veterans of America, blasted Stop-Loss for portraying soldiers as “pro-war, beer-swigging, handgun-toting, Toby Keith-singing super-patriots with flags tattooed on their arms.” The movie, he noted, was loaded with “inaccuracies any vet could have spotted.” From what I’ve seen, Generation Kill‘s attention to detail should trump any accusations of stereotyping or sensationalism.

The idea that vets are Generation Kill‘s test audience seems to confirm the notion that the viewership for films about the war is miniscule. Yet inside Simon’s desire to make a war movie that warriors will recognize and hopefully embrace may be a formula for a movie that not only captures war’s realities but has wide appeal to boot. Simon explains that his guiding principle is to “write for the people you are telling the story about, convince them that you’ve got the story right, and then everyone else will follow.” If his faith in the journalistic “show, don’t tell” ethos proves correct, then the first Iraq War movie to aspire to something close to documentary realism will resonate far beyond its airdate. And if he’s wrong, a great war movie will go neglected. But more distressingly, so will the war that inspired it.