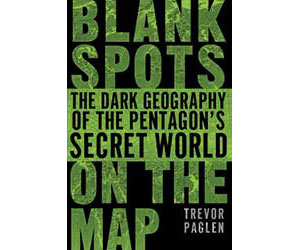 For all his talk of transparency, Barack Obama now heads a secret government—4 million Americans with security clearances generating 250 million pages of classified documents a year, and a “black budget” of as much as $60 billion. In this fascinating attempt to trace the physical contours of this parallel intelligence world, geographer Trevor Paglen investigates everything from suburban office parks staffed by spooks to clandestine airstrips and extralegal prisons. He engagingly blurs the line between research and sleuthing. From the 18th floor of a Vegas Strip casino, he watches charter flights between the city airport and top-secret desert bases; he visits a Virginia PO box that receives mail for 168 “sterile identities” maintained by the CIA; and he meets a Canadian hobbyist who catalogs spy satellites that can become virtually invisible. (It involves mirrors.)

Born of the Manhattan Project and Cold War paranoia, the culture of government secrecy, writes Paglen, has become antithetical to democracy: “Blank spots on maps have generated blank spots in the law.” He meets the wife of a contractor who died in 1995 after inhaling toxic smoke at Area 51, where—sorry, ufo buffs—the Air Force tests high-tech stealth aircraft. When she sued the federal government for compensation, the case was thrown out after the military claimed that the base “did not exist.” Yet, as Paglen finds, just poking at the boundaries of this netherland is a step toward accountability. “It really isn’t possible to make things disappear,” he writes. “Secrecy…is always bound to fail.”