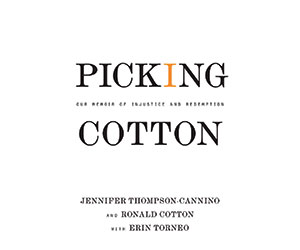 One night in 1984, Jennifer Thompson-Cannino was raped at knifepoint in Burlington, North Carolina. A few days later, the cops got a call from a local restaurant manager who said his busboy, Ronald Cotton, resembled the composite of the suspect. When Cotton heard the police were looking for him, he wasn’t worried: He had been asleep at home on the night of the rape. But he mixed up his alibi, so Thompson-Cannino was brought in to identify him in a lineup. She did, and her eyewitness testimony guaranteed his conviction.

Eleven years later, when dna evidence exonerated Cotton, both he and Thompson-Cannino were forced to confront reality: He faced a difficult transition from prison to freedom, and she faced the truth about that night and her part in undoing an innocent man’s life. But instead of going their separate ways, the two decided to meet and eventually began corresponding. Picking Cotton, their joint memoir, tells the story of how, in spite of their history, the two became friends.

Thompson-Cannino and Cotton’s writing is clichéd, but their powerful story transcends the purple prose. Their intent is not to shock; it is to reveal how, more than 23 years after Thompson-Cannino fingered Cotton in a lineup, she could say, “Thank God I picked you.” An old adage says that the justice system eventually corrects itself, no matter how grave the error. In Picking Cotton, when the system fails, redemption comes from ordinary people.