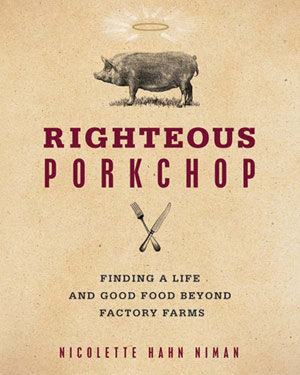 Attorney (and vegetarian) Nicolette Hahn had already spent years deep in the recesses of factory farming when she met rancher Bill Niman, the famous grass-fed beef mogul. Within months they were married. Now the two share, if not every dinner platter, a hunger for creating a more sustainable (and chic) farming future.

Righteous Porkchop (named for its focus on righting the pig industry) begins in 2000 with Hahn’s former life as the lead attorney for Waterkeeper, heading Robert Kennedy Jr.’s crusade against industrial pig farming. She takes on undercover pork lobbyists, tours dozens of manure-infested factories, and eventually sues some of the biggest factory farms in the country for violating the Clean Water Act—and wins. Then, just as the battle against Big Pork is getting juicy, Hahn quits “as a matter of self-preservation.” It’s a shame for the reader, since at this point the book feels insidery, like Fast Food Nation from a legal perspective, The Meatrix, only in living color, with new revelations about how industrial meat gets from farm to plate.

After she quits her draining crusade, Hahn gets together with Niman , and soon she finds herself on Niman’s bucolic Northern California ranch spending her days tending to mother cows, checking their eyes, coats, hooves, and bellies. The vocation couldn’t be further from her New York City lawyer life, but in both roles her goal has been the same—to reform our broken system of animal husbandry.

Porkchop is a memoir of meat and muckraking (there are 50 pages of footnotes), but what makes it more than just another foray into meat’s ills is Hahn’s personal journey—as an eater. The decisions she faces aren’t as clear as eat meat or don’t—dairy cows are among the most suspect in treatment and milk quality—and the road to sustainable, independent farming is paved with harsh realities of commerce and regulations (and the lack thereof). Still, as a litigator and then as a (still-vegetarian) rancher, Hahn has been on the front lines of very different, but interconnected, food fights. Where the battle is most effectively fought, in the pasture or in the courtroom, is a question that remains unanswered.