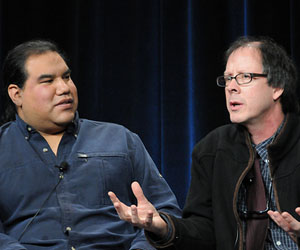 Feature film director Chris Eyre has been giving a voice to contemporary Native American people ever since his 1998 indie hit Smoke Signals. Director Ric Burns has built his career on documentary films about innovators like Andy Warhol and Ansel Adams.

The two filmmakers recently teamed up to create We Shall Remain, a five-part PBS documentary that traces Native American history from the Mayflower through the 1970s. Mother Jones spoke with the two directors about Martin Scorsese, the US map that almost was, and how Hollywood usually handles Native American characters.

Listen to the interview as a podcast, or read a condensed version of the transcript below.

Mother Jones: Ric, you have a long history with documentary filmmaking, but Chris, your background is more with features. How did you both come together to film this series?

Ric Burns: It’s really the worst idea you can imagine. I mean, to put two directors on the same project. But it worked out fantastically well. It’s funny—I think some of the differences between feature filmmaking and documentary filmmaking are more apparent than real. In both cases a camera has to be looking at something that has conviction and power.

MJ: Chris, I was perusing your website this morning and I noticed many quotes calling you “the preeminent native American film director.” I think the last one was from People.

CE: Yeah, I told them to say that and they were nice enough to. Really, I love making movies about native people because there’s such an absence of three-dimensional native people in the mass media. We are nobles or savages whether you watch Walker, Texas Ranger or Dances with Wolves. So in We Shall Remain, what we tried to do is to make something slightly different. We didn’t do huge battle scenes with stunt coordinators, because I feel like it’s not my job to romanticize Indians; that’s Hollywood’s job, and it’s been done ad nauseam. I’m more interested in portraying native people in ways that actually give us respect as just human beings. For example, people think they know the story of Tecumseh or Geronimo or the Trail of Tears, but we slightly step to the side of the conventional history and show these leaders as three-dimensional characters. Nothing is black or white, and these people are not romanticized as Indians who fight and scream and shoot arrows.

RB: This history is so loaded it’s easy to polarize it, and the real stories are much more riveting. Maybe we as Americans have arrived at a point where we can look at even terrible aspects of the American past—essentially the removal of Native American peoples from the eastern half of the continent in the 18th and 19th century—and see the people involved in the round. That was definitely our attempt with Tecumseh and his younger brother Lowawluwaysica, who was a very complicated failed holy man who became the catalyst for a spiritual revival in the early 19th century.

MJ: When you were casting for the reenactment portions, to what extent were you trying to cast from the tribes being portrayed?

CE: We worked on that quite a bit. We had a casting director named Renee Hanes who has been the native consultant for a lot of Indian movies, and she has a database of native people from around the country who are actors, or kind of actors, or not really actors at all but wonderful cultural advisers. A lot of times we did cast actual Shawnee people for “Tecumseh” as extras. For “Trail of Tears” we cast Cherokees for some small speaking roles and we cast the actor Wes Studi, who grew up speaking Cherokee, but had never spoken his language in a movie, though he’s done over 50 movies. He actually got to speak his own first language. And I would listen to elders reenacting characters and talking to each other in Cherokee for this Cherokee movie and I would think, “Wow, this is progress in some great way.”

RB: One thing I definitely learned is that there’s no difference between fiction filmmaking and documentary filmmaking. Something a great filmmaker like Martin Scorsese has always known is that there are certain realities you don’t have access to, so you have to create them so you can put your camera down in front of them and document them. Like Casino. He couldn’t have had that kind of access, so he created the access and then he filmed it. And I felt that in a certain way we were trying to basically do the same thing, which is create a situation and then drop a camera into it and if there was enough conviction and commitment coming out of that situation then the camera would have something worth seeing.

CE: If there are moments where people can say, “Yes, I get it, these people actually were alive and they did walk the Earth and they did make mistakes and they did struggle and strive, often against fearful odds.” And if you can feel that for a moment then, speaking for myself, I’ll be thrilled that we’ve at least pushed back the veil enough so that people will include in their repertoire of things they understand about the American past these people who are so easy to either render as cliché or to lose sight of altogether. I mean, I grew up in Ann Arbor, Michigan, 20 miles from a town called Tecumseh, and never asked myself once why it was called Tecumseh, right near the border of Indiana, a state that has the word Indian in it. So totally has Native American history been clearcut east of the Mississippi that you can have a state called Indiana and no longer hear the word Indian in it.

MJ: And still the end of the film is very hopeful. It ends with a great amount of optimism toward the preservation of Native American culture. Was that on purpose?

CE: Absolutely. The series is called We Shall Remain, which means not just an adage from 30 years ago with the American Indian movement, but that we’re still here. I think about my daughter who’s 10, and I think, “We’re not just here—we’re thriving and progressive and healthy.”

RB: And also, not to sound too gloomy, but life ends somewhat darkly for all of us. We all die; we all slip into the past. The fact is in each of these stories people did really extraordinary things under the most adverse of circumstances. I love the idea that Tecumseh and his pan-Indian movement came within a heartbeat of creating a state of affairs in which if you looked at a map of the United States there would be a big horseshoe-shaped bite out of it in the middle of the country—Ohio, Indiana, Michigan, Illinois, Wisconsin, and Minnesota—which would have been a permanent united Indian states of America within the United States, not a reservation. It could’ve happened differently. Many of us may agree that it’s too bad it didn’t work out differently, but it’s always optimistic, always thrilling to understand the occasionally heroic stature human beings can attain. In these stories there’s a tremendous sense of hope and pride in the complexity of the human character and of the American experience.