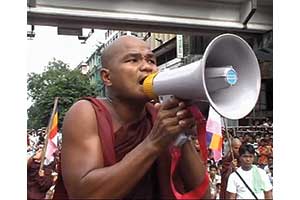 It’s the rare documentary that thrills like an action flick, but Burma VJ had me cheering for fearless Burmese citizen journalists like they were Jason Bourne. Danish director Anders Østergaard constructs his adrenaline-charged film out of footage shot by ordinary folks who risk arrest and even death to clandestinely document the brutality of the Burmese junta. Its hero is “Joshua,” a 27-year-old amateur field producer for the underground video news organization Democratic Voice of Burma. After more than 45 years of military rule, foreigners often know more about Burmese news than Burmese themselves, since state-controlled media censor the news and carrying a camcorder is illegal. Through Joshua and his colleagues’ lenses, we quickly see why. In September 2007, Buddhist monks take to the streets, only to be attacked by plainclothes security agents and police. One undercover journalist films the body of a beaten monk floating in a swamp.

Østergaard weaves in news reports, interviews, and historical images, but much of the film is visceral real-time footage. In one scene, the frame shudders as the cameraman races toward the sound of gunshots, and the screen blurs as he spots the police and hides the camera. All the jostling makes for a rough ride, but it’s also what makes Burma VJ so captivating.