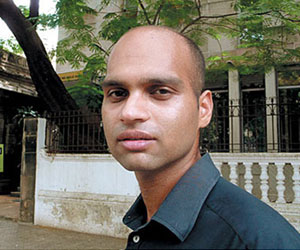 Aravind Adiga, the 34-year-old author of last year’s Man Booker Prize winner, The White Tiger, is back with a new India lovers’ delight: Between the Assassinations. The novel-in-stories takes the form of a guidebook to the fictional city of Kittur, a hamlet on the southwestern coast of India, as it existed between 1984 and 1991. Adiga spoke with Mother Jones from Toronto, Canada, about global terrorism, the problem with Bollywood, and why 1991 is the most important year ever.

Mother Jones: Your first book, The White Tiger, came out just last year. How is it to have Between the Assassinations out so quickly as an encore?

Aravind Adiga: This book was always conceived of as a kind of companion piece to The White Tiger. When I was living in New Delhi and writing for Time magazine, I wanted to write two books. And these effectively would be two books on either side of the great divide in modern Indian history, which is the year 1991.

When I was a boy in India, we lived in a closed-off, socialist economy where just about everything was controlled by the government. It was a stagnant, largely corrupt system, and this defined life. And in 1991 everything changed, and the economy was opened up and what is called the New India began. And the New India is the India in which The White Tiger is set, and I’d always wanted a kind of mirror image set in the last years of the old India. And this is Between the Assassinations. It was written in parallel with the first draft of The White Tiger and The White Tiger grew out of a couple of stories from it. I was trying with The White Tiger to write in a different kind of style. I think in some ways Between the Assassinations is a more conventionally literary work. So the two books, in my mind, have always linked together.

MJ: You would have been quite young when Indira Gandhi was assassinated. About 10, is that right?

AA: That’s right. It’s my first political memory, in a sense, and my life as a political human being begins on that day. I remember the day vividly because school shut down and my father came to school. It was the only day in my life he ever came to school. It was the 31st of October, 1984, and my father came to school and took me home and this is because there was a fear that there would be trouble because the prime minister had been assassinated. In the end there was no trouble in the south. There was a bloody massacre in the city of Delhi, of several thousand innocent Sikhs, but we didn’t know that in the south. It was a landmark day in my life because I began to think about politics quite seriously after that.

But not just for me. I think for all people of my generation, Indira Gandhi had been this very powerful, dominating, ambiguous mother figure. Ambiguous because she was tyrannical, she had imposed…she had suspended Indian democracy for a few years but she also was the woman who had defeated Pakistan in war at a time when most male politicians in India had secretly feared fighting that war, so that here in India even today Indira Gandhi is called by Indian nationalists the only man ever to have governed India. What they mean by that is she was a woman of great courage. So she was an ambiguous figure who was both protective and necessary and also tyrannical and overpowering, and when she died there was both trauma at her death and anxiety about the future, but also the hope that the system she had created that was stagnant and corrupt and bureaucratic could be replaced by something better. And her son who succeeded her, Rajiv, was this very handsome, idealistic young man who was a figure who people of my generation could identify with, and he promised to change things in India when he became prime minister. And he began to take tentative steps towards change but he was unable to change things. He succumbed to the same system that his mother had succumbed to. And when he died in 1991, most of his promise had been wasted. So in a sense the years between the two assassinations, 1984 and 1991, are years largely of squandered idealism and hope, I think. It was clear that the old India was at an end, but no one knew what was going to replace it. It was quite an extraordinary time when you knew that your way of life, your political and economic system was bankrupt, and that a great crisis would hit it. But no one knew what that crisis would be and what the new India would look like.

AA I was in Mumbai during 26/11. But India, remember, has had a series of terrorist attacks long before 26/11. Terrorism is now a fairly routine activity in India. And 26/11 was something quite horrific, but there had been prior attacks in Mumbai and in Delhi that I’d witnessed. And India in fact has seen terrorism even before that, so it’s something you get used to here. The horror is of seeing people dead close, which is always traumatic, but what is sometimes frustrating is terrorism just doesn’t seem to lead to any systematic government response in India. What keeps India safe really is the heroism of millions of poor Indians who every day reject the allure of terrorism. What keeps India safe is just the courage of poor Indians, not the actions of its government.

MJ: Do you think that your work as a journalist has any influence on the way you write fiction? For example, that your books are split up into stories and letters, respectively?

AA: I think that it comes from the kind of writing I like to read myself. I like reading that engages me and that moves, that has pace to it. I think I write what I would like to read. In a sense, journalism can be both helpful and detrimental to a writer of fiction because the kind of writing you need to do as a journalist is so different. It has to be clear, unambiguous, concise, and as a writer often you are trying to do things that are more ambiguous. I find that writing fiction is often an antidote to reading and writing too much journalism.

In a sense, being a full-time writer is less fun than I imagined it would be because there’s no office to go to anymore, there’s no set routine, there’s no schedule. It can be quite isolating. So in many ways I do miss having an office and having colleagues and having a set routine. So it’s both good and bad.

MJ: Has there been more interest in your work now that Slumdog Millionaire is an Oscar winner?

AA: Within India, Slumdog and The White Tiger have been kind of lumped together by some people, which I think is a wrong comparison. They’re very different works. Within India, The White Tiger was controversial when it came out, and also immensely popular. The controversy was just dying out when Slumdog came out, and it revived the controversy of the two works. I’ve tended to avoid talking about the movie because I think my work is quite different from that, and I’m eager that they not be lumped together.

I think Slumdog did one important thing, which is it put the poor of Bombay and the poor of India back in the cinema of India. That is, for a long time now the poor and the slums have vanished entirely from Hindi cinema. When I was a boy, the cinema, the Hindi cinema showed movies in which the protagonists, the heroes, were working-class men like coolies or coal miners. So our greatest Hindi movie actor of all time, Amitabh Bachchan, used to act as coal miners and coolies in the cinema when I was young, and that has changed now. The cinema, the Hindi cinema, focuses almost entirely on sort of rich characters, and the poor have kind of vanished entirely.

The other day I was reading my old diary notes and I was just thinking I would never be able to write either The White Tiger or possibly even Between the Assassinations now because both of them are focused very much on subaltern and marginal characters in Indian society, like the servants, the beggars, the quack sexologists that you see traveling through India. Characters that were very, very visible to me when I first got back to India because they were so strange, and so I noticed them as someone coming back to India would. The longer I stay, the more they become invisible again, as they are to most middle-class Indians. I’ve become more homogenized, more reabsorbed into the social matrix of life in India, which may or may not be a good thing.

MJ: Can you give me any hints about your third book?

AA: Every book is a kind of struggle, and it’s a miracle when it comes out. Being very superstitious and an Indian, I don’t want to jinx it by talking about it. It’ll feel like a miracle to me, that’s all I can say. I’ve written two books now that have been published, and it’s quite incredible to actually get something done and to have it published and to have it in my hand. I’m holding my book in my hand right now. It’s incredible that these things get done.