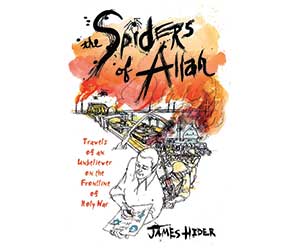 It’s a bloody miracle James Hider isn’t dead. But then, Hider, the Middle East bureau chief for the Times of London, doesn’t believe in divine intervention. Dumb luck has helped the atheist escape all manner of potentially fatal binds: cowering in a Gaza terrorist compound as Israeli warplanes buzz by, fleeing furious Iraqi mobs, and taking shrapnel with an American unit in Fallujah.

This romp through the cradle of civilization—think Hunter S. Thompson meets Christopher Hitchens—takes Hider from suicide bombers‘ lairs and hardcore Zionist settlements to a mosque in Mosul, where a 7-foot-tall Sufi sheikh insists the British reporter impale himself with a metal skewer. (He’s kidding.)

Indeed, Hider finds plenty of grim humor in the midst of the chaos of Iraq. Beyond the typical narrative of mayhem and missed opportunity, he writes of the magic, rice-eating stones that many Iraqis believed protected Saddam Hussein, and the spiders—an Internet rumor—that insurgents believed Allah had sent to destroy the infidel army. Not to mention Al Qaeda in Iraq’s decrees that goats had to be clad in underpants and that grocers could no longer display cucumbers and tomatoes in close proximity (too suggestive).

Mixed in with such oddities is a potent point about the dark side of faith and how things can get disturbingly nihilistic at the nexus of extreme and clashing beliefs. In one scene, Hider talks cars with a Shiite death squad member who extols the virtues of a model whose trunk can fit four bodies. Though much of his reporting captures Iraq as it was before the surge or word of an American withdrawal, Spiders of Allah left me ever more skeptical that the country’s sectarian rifts will mend easily. As Hider puts it, “It seems the rational world…will continue to be blindsided in a bloody fashion by the madness within us.”