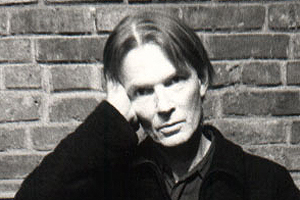 As the only member of my high school’s Class of ’78 who was a dues-paying member of the Patti Smith fan club, I waited for her rare local appearance at San Diego’s California Theatre with the giddiness of an Opus Dei insider waiting for an audience with the pope.

But I was less than thrilled, on the evening of May 16, 1978, when Patti introduced her opening act: “the guy who taught me how to write poetry,” a lank-haired stick insect of a man whose skin was so luminously pale it seemed to glow. Jim Carroll mumbled his way through excerpts from The Basketball Diaries in a smackhead monotone, fighting to be heard above Patti’s band vamping behind him. By all accounts, it was Carroll’s first reading with a live band. As the gonzo rock critic Lester Bangs said in another context, it wasn’t exactly the premiere of Le Sacre du Printemps.

Yet, a scant two years later, on his 1980 debut record Catholic Boy, Carroll proved that writers could shred, too. Delivered with teeth-gritting intensity and slammed home by buzz saw guitar, “People Who Died,” the album’s cult hit, was a Ramones-ian elegy for boyhood friends who took one too many walks on New York City’s wild side:

Mary took a dry dive from a hotel room
Bobby hung himself from a cell in the tombs
Judy jumped in front of a subway train
Eddie got slit in the jugular vein
And Eddie, I miss you more than all the others,
And I salute you brother

By 1984, when I interviewed him for the art magazine High Performance, Jim Carroll was still a cult figure, the predictable fate of a writer who was never really a singer, even in the limited sense that punk poets like Lou Reed or Tom Verlaine of the band Television were singers. His adenoidal timbre and strained delivery, which tended to swoop into a yelp at line’s end, for emphasis, worked on gritty, spat-out songs like “People Who Died,” “Catholic Boy,” and the viciously brilliant “It’s Too Late.” But on songs that beg to be sung, like his ill-advised cover of Lou Reed’s “Sweet Jane” or his own Springsteen-ish “Day and Night,” Carroll’s vocal style grated.

More than Patti or Lou, Jim Carroll was a creature of the printed page, with a writer’s fastidious attention to literary joinery, a writer’s ear for the cadences of words on paper, a writerly introversion that always seemed scalded by the spotlight, no matter how many times he performed. His speaking voice had a toneless quaver that made him sound as if he was always on the verge of tears—”the tremulous delicacy of a poet,” Dennis Miller called it, in a talk show interview, prompting Carroll to jokingly concede that “friends, when I call them up on the phone, they go, ‘Did a parent just die or something’?” In “8 Fragments For Kurt Cobain” (from his 1998 book of poems, Void Of Course), he’s more revealing: “My voice has a quiver/ A quiver is where you keep arrows until you shoot them.”

The cross Jim Carroll had to bear was his liminality. He was a writer’s idea of a punk rocker and a punk rocker’s idea of a writer. The seemingly insuperable obstacle that confronts every would-be rock poet is the hard truth that, when most people listen to pop music, they hear the words and the music as a gestalt, a seamless thing whose meaning is greater than the sum of its parts. That’s why the meaning of the best pop songs is elusive, irreducible, confounding explication; pinned to the page, most rock lyrics (with the notable exceptions of Patti, Dylan, Leonard Cohen, et. al.) sound either brain-dead or bathetic or unbearably pretentious. This is a revelation to nobody but that geek who quoted Kansas’s “Dust in the Wind” in your high-school yearbook. Yet, seamlessly integrated into the musical micro-world of a pop song, words—especially impressionistic non-sequiturs like the Burroughsian cut-ups and snippets of “found” language favored by elliptical lyricists like David Byrne and David Bowie—can seem depthlessly profound, at least for the two- or three-minute lifespan of most pop songs. And who needs more than three minutes of profundity, anyway?

Jim Carroll gave us that—at least—on nearly every song on his ferociously honest first record, as well as some of the cuts on his 1998 spoken-word-and-music release, Pools of Mercury. How many poets, let alone rock poets, give us half that much? How many debut records are half as brilliant? How many brain-rattlingly great lines does a writer have to give us before we’re willing to count him among the company of the good, maybe even the exalted? What is a writer, when he’s gone, but a few good lines and maybe a prickling on the back of the neck, that feeling of something passing by when we read one of his poems or drop the needle on one of his records?

I feel her skin…it’s thin and white as pressed milk
I closed my eyes and she vanished just like burnt silk
And what remains was like some fallen thunder
And my lips were chained; they were filled with empty wonder
But the stars tell lies, it blinds the only warning?And when darkness dies, there’s nothing left but morning…
— “Day and Night,” Catholic Boy

They wait in shadows and steal the light from your eyes
To them vision’s just some costly infection
But listen, you should come with me
I’m the fire, I’m the fire’s reflection
I’m just a constant warning to take the other direction

Mister, I am your connection
— “City Drops Into the Night,” Catholic Boy

I want the angel
Whose darkness doubles
It absorbs the brilliance of all my troubles
— “I Want the Angel,” Catholic Boy

When I heard Jim Carroll had died of a heart attack on September 11, at the age of 60, I wondered if there was a less consoling story behind the official version. Sixty seemed young, even for an ex-junkie ravaged by his teenage excesses. On the Web, I found a shocking photo of Carroll at 57, looking like 87—gap-toothed, sunken-eyed, emaciated. A post on the blog Ephemerist described an abortive attempt at a reading by a confused, disorganized Carroll; he’d been ill, the “gaunt, sunken, stooped” author told the crowd. In the accompanying comment thread, saddened fans wondered if he’d relapsed into heroin addiction or gotten hooked on meth.

Reading between the lines of Carroll’s online bios, where his literary and musical output seems to end in 2000, I think I see an aging writer taunted into silence by his younger, more successful self, struggling to shake off his retro-’80s reputation, scrambling to make a buck. Reportedly, he’d been at work for the past decade or more, on a novel called The Petting Zoo. A decade is a long time, especially in a culture where you’re only as good as your last act. He died at his writing desk.

Catholic Boy inspired me, an English major with a hyperactive record collection, to bluff my way to the mike stand. In 1983, fresh out of college, I moved to New York in an ill-advised bid for dominance of the performance-poetry field, a growth industry in the wake of “People Who Died.” My time as a Jim Carroll impersonator on the rock-poetry circuit was mercifully brief.

By 1984, I was writing rock criticism, and seized the opportunity to interview Carroll in some depressingly forgettable New York bar. He nursed a margarita, which struck me at the time as one of those sweetish drinks that junkies, recovering (or not), tend to order. Yet, despite the world-weary, all-tomorrow’s-parties delivery and the flattened affect, he was smart and passionate, quick off the mark with a snappy comeback and far funnier than I’d expected.

Talking about the couplet that kicks off his song “It’s Too Late”—It’s too late/to fall in love with Sharon Tate/but it’s too soon/to ask me for the words I want carved on my tomb—Carroll chuckled drily.

“I remember some kid about 11 years old quoted the whole thing to me on the beach one time, outside of Boston. He was in thralls of ecstasy. He knew this song and he saw me on the beach and he could never come to any shows because he was too young but he’d always listened to this song. I told him to come to the show that night and stay backstage. I love kids that come to shows, little kids coming up to you with braces, like some kid came up to me in a parking lot outside a show in Santa Cruz, he was about 14 or 15, and he said, ‘Y’know, I love The Basketball Diaries but I hope your next book of poetry isn’t gonna be as academic as Living At The Movies was.’ I said, ‘What are you, a little critic?'”