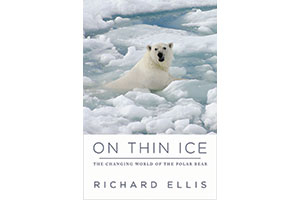 Polar bears are the cuddly mascots of our rapidly warming world. But as Richard Ellis writes in this exhaustive work of natural and cultural history, we haven’t always been so eager to save them. As early as the 1600s, Arctic explorers’ first instinct was to shoot the “greate leane white beare,” mostly for sport, but sometimes for food (though sailors who ate its vitamin A-rich liver found that their “skinnes peeled off”). After a winter trapped in the ice, a 19th century Norwegian explorer reported that “Roasted cub-stake and tasty bear’s tongue made a welcome addition to our menu.”

It was when P.T. Barnum and others conscripted bears into circus duty in the 1800s that the public began to see them as entertainment. Fast-forward to 2007, when “Cute Knut,” a cub born at the Berlin Zoo, shared the cover of Vanity Fair‘s “green issue” with Leonardo DiCaprio and kicked off a war between German zoos vying to acquire the most adorable white furballs.

Even as we fetishize polar bears, we’re still killing them off, now with carbon emissions and habitat encroachment. The bears’ hunting grounds are melting and shrinking, killing some and driving others to dumpster diving. Great white bears in the backyard, writes Ellis, might be the kind of wake-up call we need to start taking their survival seriously.