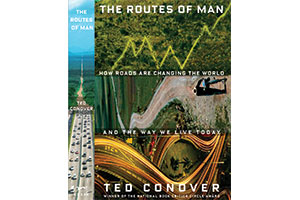 In his latest book, Ted Conover—famous for his turn as a Sing Sing prison guard in Newjack—takes a wild road trip from Lagos to Beijing, Peru to Palestine. His examination of the planet’s “largest human-made artifact” spans four continents, tracking globalization by its asphalt footprints. He rarely takes the path of least resistance: He hitchhikes along an ambitious construction project traversing the Peruvian Andes, braves Israel’s “Highway of Death” through the West Bank, and walks an ancient 40-mile ice road through the Indian Himalayas.

You can tell a lot about a society from its relationship with its roads. Among the schoolkids who guide Conover through the Himalayas, “all three of the boys wanted to become engineers; an engineer, to each of them, was a man who supervised road construction (and got paid well for it).” For the Chinese, highways are a symbol of personal freedom and national unity. The country is pushing for 53,000 miles of freeway by 2035. (In the last 60 years, the United States has built 46,000.) With time, roads also take on new, unexpected meanings. “The road is very unfair, very harsh,” laments a trucker in Kenya, where long-haul routes have been a major corridor for the spread of HIV. “Roads,” Conover writes, “are the best metaphor we have for talking about life.”