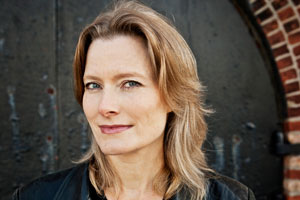 Toward the end of Jennifer Egan’s new novel A Visit From the Goon Squad, a 12-year-old girl succinctly explains the differences between her mom’s and dad’s parenting approaches in a PowerPoint slide. In fact, the entire chapter is in the form of a PowerPoint presentation. And unlike many PowerPoint presentations I’ve sat through, it’s riveting. But that’s not the only reason to pick up Goon Squad: The novel is a gripping series of interconnected short stories circling around an aging music industry exec and his young assistant, but it’s also a smart meditation on time, and especially the nature of human memory. Egan, the author of two previous novels and two collections of short stories, is also journalist: Topics she has written about for the New York Times Magazine include bipolar children, sperm banks putting donors’ profiles online, and gay teens connecting on the Internet. I talked with Egan about Goon Squad, the San Francisco punk scene, and why Facebook creeps her out.

Mother Jones: What gave you the idea to do a chapter of Goon Squad as a PowerPoint?

Jennifer Egan: I think what first made me so interested in it was reading something about the Obama campaign two summers ago, when things really turned around for him. I had read that one critical element of the turnaround had been this PowerPoint presentation that laid out clearly where things were not falling into place and what needed to be done to change them. And at that point I thought this has really become an absolutely sort of archetypal form of communication now. And as soon as I realized that somehow it became very clear to me that I needed to write a story in PowerPoint. And I had never used PowerPoint. I did not have PowerPoint and wasn’t particularly interested in acquiring PowerPoint. I looked at a lot of PowerPoints, and I first tried writing it out by hand as I always do, and it was just a disaster. I finally did spring for Microsoft Office. And then, all of sudden I had a different idea of how to do this in a way that felt really rich, and that was that it would be this journal of a 12-year-old girl. And then it really possessed me for about two months and was pretty much all I did.

MJ: One theme that I really liked reading about in Goon Squad was music. You have a nice bit at the beginning that is kind of a portrait of the punk scene in the ’70s and early ’80s in San Francisco. Were you a San Francisco punk?

JE: I was, as I am in all realms of life, just an observer, but I was there. I was not a punk rocker, absolutely not, but I certainly knew quite a lot of them and I definitely went to the Mab—it was raw, interesting intense scene, so I was very drawn to it, but I was a total outsider. I wore some makeup but that’s as far as it went. I haven’t really been part of any music scene in my life. I don’t have a very strong relationship to the music industry. As a journalist, I have wanted very much to find a way to write about the music industry, and it’s been frustrating to me that that’s never worked out. Now I feel sort of happy, because this ended up being my way to be able to do that.

MJ: Did you talk to music industry folks for the book?

JE: Yes—though not a lot. I did do a little research into the technology of it, and any things that happen there musically I think are pretty sound in terms of having been researched, but in fact there isn’t really that much. I think what interested me is more looking back. I was most immediately moved by reading Proust all the way to the end for the first time, and there’s tons of music in Proust, I think partially because music and time have such an interesting relationship. Music makes time fall away like almost nothing else. You hear a song from another moment of your life and it really is like you’re still there. That’s why the music of our youth ends up being particularly powerful. It’s why my mom still mists up over the music of the ’50s. The coming of age music that you grab a hold of as the symbol or the expression of your independence and hopes for the future and anger and rebellion or whatever it is you’re feeling is so powerful for the rest of your life when you hear it.

MJ: You’re really good at writing about teenagers—you’ve written about them in your fiction and your journalism, too. So is that a particular interest of yours?

JE: You know, honestly, I feel like I’m still practically there. I feel like I remember that stuff so vividly that I can’t even believe I could easily have children who are long out of that period. It feels very immediate to me. I think that’s one reason I’ve ended up writing about it as a journalist: It just comes very naturally. It just feels one step removed from me now. I don’t know why on Earth that is. I guess it’s just that period of discovering the world and trying to negotiate one’s relationship to it…there’s nothing else like it for the rest of life, the feeling of having your entire adult life out in front of you.

MJ: What kind of journalistic topics interest you right now?

JE: I’m very interested in the way the Internet has changed teenage life. Obviously it’s very different from when I grew up, when there weren’t even answering machines, much less computers. I was telling my children this the other day, and the little one said, “Did you have electricity, Mom?” and I was like okay, enough, kid. Let’s not get carried away. But that has fueled some of my journalism, like the story about closeted gay teens and the way they’re cruising the Internet to have these online out lives. But even that is just tremendously out of date now. I mean, that story is almost 10 years old. I do feel like it’s time just for my own sense of knowing what the hell is going on, it’s time for another look at how things have changed and evolved. Facebook didn’t exist when I was writing about the closeted gay teens; things have really changed a lot.

MJ: You write everything out longhand when you write fiction, but you use a computer for journalism. Why?

JE: I do! That’s not so much about rejecting technology as being unable to write fiction on a computer for some reason. I don’t think I would write it on a typewriter either. I really like, I write in a very blind gut instinctive way. It has been pointed out I could try covering up the screen, but it just doesn’t feel right. There’s a physical connection, even though I’m one of those people whose hand hurts when they write; it’s not that I love the feeling of writing, but there’s that creaky, often sort of achey process that gets the pump working I guess. And then in nonfiction that’s not the case at all. I can’t even imagine writing nonfiction by hand. I think if I didn’t have a computer, I just couldn’t do it. Maybe it’s a brain-section issue.

JE:  I joined Facebook recently, mostly out of a sense that it was going on, so I should be part of it. And I guess technically I’m on Twitter, but I’ve never actually looked at anything or tweeted anything, so I think that counts as a pretty absentee membership. I feel very wary of this stuff, for reasons I can’t quite articulate. I worry that it’s the middle-aged person’s general anxiety about change—like, oh! It’s making the world worse—but in fact it’s totally personal, like I don’t know how I fit into this so it must be bad. I guess some of my wonder is, where is the room for private life in all of this? It’s such a cliché, but I really mean it. I look on Facebook and I think, why does everyone want everyone to know what they’re doing? I’m missing the gene. I don’t even write about myself. In fact, I can’t. I’m terrible at using my own life in anything I write.

MJ: It kind of goes back to the being an observer thing.

JE: I guess in my own life, privacy, anonymity, and the mystery of being lost are important—I’ve been to China alone, I went to the USSR, I’ve traveled a lot by myself. I’ve been to places where no one knew me and I knew no one and it was very difficult to be in touch with the people I knew. I feel like all of those things were so formative, and I guess I wonder, how does anyone achieve that now? I also feel that people are mysterious and complex no matter what they do, and no matter how hard they try to reveal their own mystery. In the end, we’re just bigger and deeper than all of that. I really do believe that.