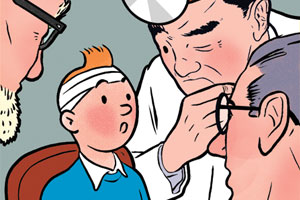 Why did Anakin Sywalker turn to the dark side? Why did Tintin never grow up? Real researchers have gone looking for the undiagnosed maladies that explain the quirks of some famous fictional characters.

Discussion: In a letter to Psychiatry Research, French psychiatrist Eric Bui argues that Anakin Skywalker’s transformation into the Dark Lord of the Sith shows all the hallmarks of BPD, including lack of impulse control and abandonment issues.

Discussion: D.W. Lewis writes in the American Journal of Diseases of Children that Dickens’ young optimist suffered from a rare condition whose symptoms include stunted growth, weak muscles, paralysis, and possible kidney failure.

Discussion: The plucky boy reporter (above) displayed “no signs of pubertal development” due to a hormonal imbalance and 43 concussions sustained over his 60-year comic-book career, concludes professor Claude Cyr in the Canadian Medical Association Journal.

Discussion: Dr. Eric Altschuler writes in the Archives of General Psychiatry that the Old Testament strongman displayed many of the behavioral criteria for ASPD, including “fire setting, cruelty to small animals, bullying, initiating physical fights, using a weapon (jawbone of ass), and stealing from a victim.”

Discussion: Melville’s “nonconforming, socially awkward character” likely had “a high-functioning form of autism,” according to Dr. Ashley Kern Koegel in the Journal of Positive Behavior Interventions.