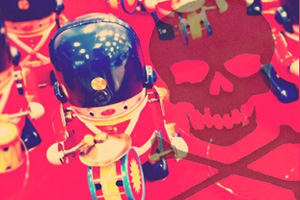 We recently reached out to a bunch of our favorite musical artists, DJs, and critics, to ask about their personal preferences—including the music we all love to get cynical about, holiday songs! So let’s hear from our celebs first, and then well turn to our Facebook fans who responded to a similar question we posted. Click on each artist’s name for a more in-depth Q&A. (The few that aren’t yet posted should be up soon: Check the Riff every Music Monday—and follow Mother Jones on Twitter.)

And now, if you’ll kindly forgive us for not publishing all the pretty headshots of MoJo readers who responded to our slightly modified version of the question, namely: What’s your favorite holiday song or album that you won’t hear on your supermarket Muzak loop?

(Add your own favorites in the comments.)

Jibreel Riley: None. I put on my headphones and carry on with, currently, M.I.A.

Antoinette Marrero: “The Elf’s Lament,” by Barenaked Ladies—hilarious song about elves on strike

Deb Poage: The sequel to “Grandma Got Run Over by a Reindeer”: “Grandma’s Revenge.” (Hank Miller and Jack Migdal suggested the original.)

Lucinda Lynch-Powell: Anything from Brian Setzer

Laura Kay Perrine Freeman: From Toys (soundtrack): “The Closing of the Year“

Richard Zink: Why, “Santa lost a Ho,” of course.

Stephen Bailey: I detest Xmas music. However there was a recording of music done by various ska artists. “Run Rudolf, Run” was the standout. I also like old English Xmas music played in moderation.

Alice E. Washburn: Decidedly, Emerson, Lake and Palmer’s “I Believe in Father Christmas.” But also any solstice carols, for those of us not of the Christian persuasion! 🙂

Bo Bentzen: The Beatles’ “Let It Be!”

Eric Berg: ‎”My First Christmas as a Woman,” by the Vandals

Nancy Reese: Are you kidding me? The country is going to hell in a hand-basket and you, Mother Jones, want to know our favorite holiday songs?

Sam Carruth: ‎”Santa Claus is Watching You,” by Ray Stevens

Baltazar Ricardo Pinedo: ‎”El Brindis del Bohemio” by Guillermo Aguirre y Fierro, as read by Juan Manuel Bernal. My father would play this every year around this time. If you understand Spanish, I highly recommend you listen to this beautiful piece. It will CHOKE YOU UP!!! Happy holidays, everyone!!!

Mary Pat Andrews: Kenny Rogers’ version of “Mary, did You Know?”…hauntingly beautiful! John Denver and the Muppets’ “A Christmas Together”…some great not-so-common carols. And for pure sentimental nostalgia, nothing beats the voice of Karen Carpenter singing “Merry Christmas Darling” or “I’ll be Home for Christmas”!

Richard M Hays Jr: A great version of “Mary’s Boy Child,” by rock musician B.E. Taylor. Log on for details about his excellent Christmas album tunes and all other great music. Taylor is here on Facebook as well.

Thomas E Youngs: ‎”Lost in the Supermarket,” by The Clash

Karen Lindsey: “Have Yourself a Merry Little Christmas,” but in the original version, in which the sadness and well as the happiness of the season is addressed.

Karen Buchanan: “Frosty the Snowman,” by the Cocteau twins

Ursula Roma: “I Ain’t Afraid,” by Holly Near

Nancy Reese: The above are prime examples of why this country is in the shape it’s in. The Repubs have formally declared war on middle class today in a written letter to the President say that they will do nothing…nothing until the tax cuts for the wealthy are extended. And people here are listing their favorite holiday songs.

Stephanie Vargas: Britten’s “Ceremony of Carols.” Whatever music you like, call your congressional legislators and tell them you will NOT vote for them again for not helping those who can’t find work. Shame on the GOP… coal in their stockings.

Lisa A. Frisch: It’s a little sad that there are some folks that deride this posting for being “silly.” Yes, things are hard right now and even frightening, but goodness, it doesn’t hurt to lighten up once in awhile—even Mother Jones. That said, one of my faves is “Christmas at KMart” Happy Holidays, All!

Alex Enyart: “Merry Christmas, I Don’t Want to Fight Tonight,” by The Ramones

Bob Suzuki: The Ronettes’ version of ‎”Frosty The Snowman”

Sarajane V. Lien: Squirrel Nut Zippers’ Christmas album is one of my favorites, especially “I Love the Winter Weather” and “Christmas in Carolina.” Another good one is “I Yust Go Nuts at Christmas.” And, oh yeah: John Boehner can go boff himself with an empty orange spray-tan bottle. Effing wanker.

Yael Li-Ron: ‎”A Jew on Christmas,” by Kyle of the South Park gang.

Betty Rubble-Larsen: Christmas in the Stars: Star Wars Christmas album—the one about getting the wookie a gift

Andrea Roberts: All of the obtuse tracks from the movie soundtrack of The Grinch

Rikki Johnson: “The 12 Days of Christmas” by Bob and Doug McKenzie (“And a beer in a tree.”) (Jenny Okrasinski concurs.)

Beth Belgard Crader: “Feliz Navid” is my all-time favorite. When I lived in MD we would go into DC to club and there was a band there that played it every night for me!!

Mary Wood: ‎”White Wine in the Sun,” by Tim Minchin, an Xmas song for atheists that is both beautiful, kind of funny; ironic rather than angry. And people, come on: “Grandma Got Run Over by a Reindeer”? That most definitely gets played on grocery store Muzak and is one of the reasons I seriously consider going without food for the month of December—so I never have to hear that idiotic thing again.

Petr Salidar Threnody: “Threnody for The Victims of Hiroshima,” by Krzysztof Penderecki

Remember to add your own favorites in the comments section, and click here for more Music Mondays.