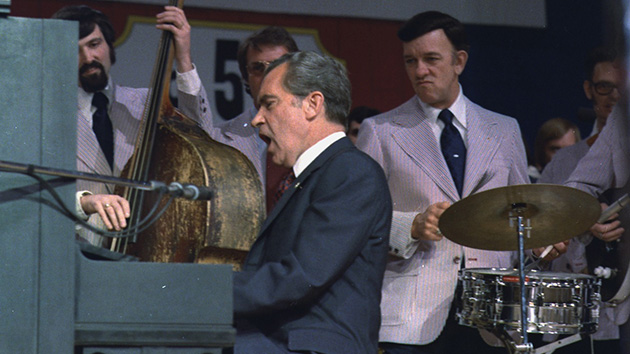 President Nixon jamming at the Grand Ole Opry in 1974.<a href="http://commons.wikimedia.org/w/index.php?title=File:Dedication_of_the_New_Grand_Ole_Opry_House_-_NARA_-_194574.tif&page=1">Wikimedia Commons</a>

Happy Presidents Day! We admit, it’s not the most thrilling of holidays: Too chilly for barbecues, too cheap for presents—we didn’t even get a tree this year. So to spice things up, here’s a treat: 44 songs about the 44 presidents. It’s 43 songs, technically, but you’re expected to listen to the song “Grover Cleveland’s Mustache” twice. Or just ignore Grover Cleveland altogether; everyone else does.

We mixed it up as best we could: some campaign songs, some diss tracks, some campaign songs that today would be mistaken for diss tracks (“Get on a Raft With Taft!” No, really, we dare you!). There are good songs and bad songs and a few songs you won’t so much listen to as survive—kind of like our presidents. Anyways, enjoy. And if we missed your favorite, drop us a line in the comments; if we get enough enough suggestions, maybe we’ll release the B-sides.

2) John Adams: “Go John Adams!” Like the real John Adams, this one will probably go unappreciated by its contemporaries.

3) Thomas Jefferson: T.J. and the Revo, “Too Late to Apologize.” The Founding Fathers, reimagined by Spinal Tap.

4) James Madison: Milton Babbitt, “Round.” My editor: “The Madison one’s a little weird, but I guess it works.”

5) James Monroe: “Monroe, yes, Monroe.” It may not sound like much now, but this campaign jingle helped Monroe win all but one electoral vote in 1820.

7) Andrew Jackson: Johnny Horton, “The Battle of New Orleans”. Improbably, the original 1959 music video is less realistic than the one that’s made with Legos. Note: The Lego version of the video has been removed from YouTube, so here’s the original music video.

8) Martin Van Buren: “The True Martin Van Buren Song.” Historians tend to fixate on the mutton chops, but as this cartoon makes clear, the “Red Fox of Kinderhook” was also short.

9) William Henry Harrison: Spindrift, “Tecumseh’s Curse.” Our lone spoken-word entrant, in honor of a man whose inaugural address had 8,442 of them.

10) John Tyler: They Might Be Giants, “Tippecanoe and Tyler Too.” The lyrics for this one come from the original 1840 campaign jingle. It’s a testament to the general insobriety of the 1830s that Harrison’s “I drink tons of hard cider” argument resonated so powerfully with the electorate.

11) James K. Polk: They Might be Giants, “James K. Polk.” As the song carefully explains, Polk accomplished everything he set out to do in one term, and then, with absolutely no sense of drama, died almost immediately.

13) Millard Fillmore: Breakfast, “Song for Millard Fillmore.” As this song attests, Fillmore has developed a cult following due to his relative obscurity. Every year on January 7th, revelers gather at Fillmore’s grave to sing “Happy Birthday.”

17) Andrew Johnson: “Who Shall Rule the American Nation.” When Johnson made it clear he intended to basically end Reconstruction, Republicans wrote this song to make the case that Johnson would negate everything they’d fought for. Which was mostly true.

20) James Garfield: Johnny Cash, “Mr. Garfield.” Like most things Garfield, this song’s about his death. In life, his greatest accomplishment may have been the discovery of a trapezoidal proof for the Pythagorean Theorem.

21) Chester A. Arthur: Letter Seventeen, “Chester Arthur.” Kinda catchy, right? Maybe even a little poignant. Arthur experienced a rare fit of posthumous relevance in 2009, owing to his distinction as the only other president to have to deal with birthers; Arthur’s opponents contended that he was a British subject.

23) Benjamin Harrison: Steve Ross, “Proud to be a Harrison.” Someone has to be.

27) William Howard Taft: “Get on a raft with Taft!” Filed under: Rejected Huck Finn plot twists.

28) Woodrow Wilson: Blind Willie Johnson (cover by Mississippistaphas), “When the War Was On.” One of the greats, from one of the greats: “Well, President Wilson, sittin’ on his throne/ Makin’ laws for everyone/ Didn’t call the black man, to lay by the white.”

30) Calvin Coolidge: Geto Boys, “The Secret.” An unsung song, for a president who never talked (Silent Cal gets a shoutout at 2:10).

30) Herbert Hoover: Annie, “We’d Like to Thank You Herbert Hoover.” The entire musical is basically an indictment of Hoover, but you know you’ve lost your country when even the red-headed orphans are taking you to task.

31) Franklin Delano Roosevelt: “Franklin D. Roosevelt Jones,” We challenge you to not tap your feet.

32) Harry Truman: Chicago, “Harry Truman.” Released during the post-Nixon funk in 1975, Robert Lamm spoke for millions when he sang “America needs you, Harry Truman”—the song reached No. 13 on the Billboard charts.

35) John F. Kennedy: Marilyn Monroe, “Happy Birthday.” Obviously. (Bonus: “Crucifixion,” Phil Ochs; “He Was a Friend of Mine,” The Byrds)

36) Lyndon B. Johnson: Tom Paxton, “Lyndon Johnson told the nation.” The president who gave us the Great Society, the Civil Rights Act, and protest songs.

37) Richard Nixon: Stevie Wonder, “You Haven’t Done Nothin’.” The title pretty much says it all.

38) Gerald Ford: James Brown, “Funky President (People It’s Bad).” Given the adjectives tossed at his predecessor, “funky” seems pretty tame. Following the line of succession, “Funky President” would go on to be sampled in, among other things, Eric B and Rakim’s “Eric B is President.”

39) Jimmy Carter: Devo, “Whip It.” This song was written by Mark Mothersbaugh to inspire Carter. Seriously, we fact-checked that.

40) Ronald Reagan: The Ramones, “Bonzo Goes to Bitburg.” The context: In 1985, President Reagan traveled to Germany and laid a wreath at a cemetery filled with SS soldiers. As Joey Ramone told Mother Jones at the time, Reagan “sort of shit on everybody.”

41) George H.W. Bush: Geto Boys, “Damn it Feels Good to Be a Gangster.” We had no idea either, but the last verse is written from the point of view of Bush the Elder.

42) Bill Clinton: Wesley Willis, “Bill Clinton.” The best part is that this song will now be stuck in your head for the next week. (Bonus: Here’s Michael Jackson and the entire Clinton–Gore clan singing “We are the World.”)

43) George W. Bush: The Legendary K.O., “George Bush Don’t Like Black People.” Like most of the songs about Dubya, this one’s a little raw, but Americans were pissed. And can you blame them?