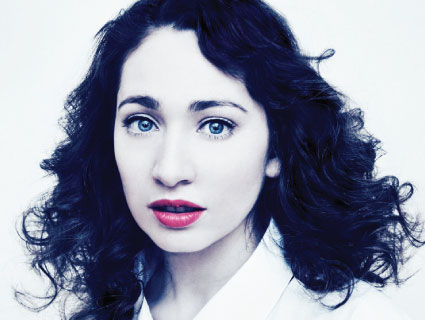 When she first landed in the Bronx, nine-year-old Regina Spektor probably stood out a little. It was the early ’90s, and Biggie Smalls and Pearl Jam were flooding the airwaves, but Spektor, whose family had just immigrated from Soviet Moscow, turned up her nose at hip-hop, punk, and even rock and roll. She preferred the classics, the Mozart and Tchaikovsky she played on the family’s Petrof upright back in Russia. Estranged from her beloved instrument, the young Spektor would habitually tap out her pieces on windowsills and tabletops—until she came across a shabby piano in the basement of a local synagogue.

Now 32, Spektor has long since changed her tune on pop music, but her offbeat imaginings and daredevil sound still distinguish her from the crowd. Her songs are packed with unlikely metaphors—black holes, blue pianos, trapped paintings—and all manner of vocal experimentation.”If something feels right to you, you make a choice,” she says of her unorthodoxy. “If everybody is saying, ‘Oh this is a really amazing work of art,’ pointing at the fire extinguisher in the gallery, and then you walk in and you’re like ‘That fire extinguisher? I just saw like 30 of them down the hall.’ There’s a silent agreement. If you’re not agreeing with it, then, you know—everybody’s either with you or they’re not.“

Everybody’s with her these days, it seems. On the eve of her sixth album, What We Saw From the Cheap Seats (out May 29), Spektor has collaborated with violin maestro Joshua Bell, been sampled by Jay-Z, toured with artists from Kings of Leon to Tom Petty, and played stages from Carnegie Hall to the White House. I caught up with Spektor to chat about her polyglot tendencies, gay rights, and how it feels to be labeled a weirdo.

Mother Jones: You’ve said you were sometimes lazy about practicing piano as a kid. Did your parents employ any wacky tactics to motivate you?

Regina Spektor: They were definitely not stage-parent type people. No meals were withheld! [Laughs.] When they would get really tired of me just not taking it seriously, or not practicing seriously, they would do the easiest thing, which was to say: “Fine, then you don’t have to take piano lessons anymore. Good. You ready to stop?” And that always got me totally terrified. ‘Cause I never was ready to stop. To them, it was no less important than anything that was part of a school curriculum.

MJ: You’ve said in interviews that your songs aren’t personal.

RS: I think that people sometimes don’t make the distinction between personal and autobiographical. A fiction writer can have their work be just as personal as a diarist. My work is obviously personal—it’s through me, it’s my imagination, it’s my emotions, I feel very, very connected to it. It’s just that I’m much more interested in things outside of myself rather than my actual self. You know, confessional: “This happened to me, and so I wrote this song.” That doesn’t really happen, where I paint my own life in my songs.

MJ: Take “How,” from your new album, which so accurately describes the difficulty of moving past an old love. When you’re writing something so earnest and universal, how do you compartmentalize the confessional?

“Did Shakespeare write only what he knew? Did Camus? Our own selves are limitless.”

RS: Well, you’re part of the human fabric of experience. You don’t have to have cancer to write about cancer. You don’t have to have somebody close to you die to understand what death is. Definitely, the more you live, the more experiences fall into your spectrum, but I have songs like “Chemo Limo,” or “Ode to Divorce”—I wrote that when I was 18. And I remember having people come up to me and be like, “You totally described what it feels like to get divorced!” As a writer, you must have been told: Write about what you know. But Kafka didn’t. Gogol didn’t. Did Shakespeare write only what he knew? Did Camus? Our own selves are limitless. And our capacity for empathy is giant. That’s why we’re able to feel sympathy for, you know, a dog who has a puppy in its litter that died; we can feel for that, and write about that. I’ve never seen that, I just see things sometimes in my mind’s eye. I guess it sounds sort of hippie, and probably is, but I do feel that we’re all part of the experience. So in that way, I guess you don’t have to compartmentalize. You could just kind of let it all be.

MJ: You incorporate lots of languages into your songs—French, Russian, Latin, Spanish. Is English not enough to express certain feelings or meanings?

RS: Really good question. I don’t know if it’s just going through immigration really early in life but, we went through three places. We went first into Austria, where you spoke German, and that’s why my last name is actually spelled with a K, because it’s the German way. And then we went into Italy and then into America, where I had to learn both English and Hebrew. So I think it kind of made me just all around feel like language is so arbitrary. It’s as arbitrary as borders and it’s all manmade. And if you deconstruct it, it’s just cool sounds. And certain feelings get triggered by those sounds. So, it feels like a color. Or a sample. I guess sometimes English doesn’t feel like enough. But, you know, I also make up words and make up sounds, so I guess nothing feels like enough! [Laughs.]

“I think it’s ridiculous that we even have to talk about gay rights as rights…It’s gonna be as shocking as the treatment of slaves someday.”

MJ: You’ve been active in the gay-rights movement. How do you think we’re doing on that count?

RS: I think it’s ridiculous that we even have to talk about gay rights as rights. We have to fight for it in 2012? I mean, this is like science fiction movies of the ’80s taking place now. This is the future? It’s gonna be as shocking as the treatment of slaves someday—like when you watch the African American Lives series on PBS and people are just like what!?” It’s just one of those shocking, human rights things. But I do feel hopeful. It’s very much at the forefront. I don’t think that’s helpful to the kids who are killing themselves because they’re being bullied, because they feel like they have a horrible life ahead of them and they can’t survive it. I think that at least it’s not a secret, dark issue; People who find the old, disgusting way of defining it are looked at as the crazies that they are. It is happening. You see it. The only thing that really, really sucks is that people who have to live through it, they’re living through it: It doesn’t help them.

MJ: Your album title reminded me of how my own Russian-Jewish immigrant family goes to see tons of performances and always get the cheapest seats in the house. What’s with the title?

RS: [Laughs.] I’m no stranger to cheap seats. You know, it’s hard really to put my finger on it. It has been kicking around in my head way before I knew what the song selection was gonna be. It came from more of a feeling rather than a conscious reason or something with a strong backstory.

MJ: There are lots of mythical and magical characters in your lyrics: Icarus, Jiminy Cricket, Santa Claus, Houdini. Is that your inner kid rearing her head?

“I don’t know if I’m missing some big thing that happened to all adults that skipped me. I somehow doubt it.”

RS: I don’t feel very separated, like, ‘Oh, this is the kid me and this is the adult me.’ I’ve never really feel that line strongly, between childhood and adulthood, except for some of the obvious stuff. But emotionally and mentally, I think that things are just interesting. Life is full of characters, whether they’re Santa Claus or Owen Meany. Any being who captures your imagination is just as interesting. To me. I don’t know if I’m missing some big thing that happened to all adults that skipped me. I somehow doubt it.

MJ: In a 2009 review of your album Far, Rolling Stone called you “the rare screwball who gets more universal as she gets weirder.” Does it bother you being portrayed as sort of a kook?

RS: Right. Which like carries over into crazy. I know what you mean. Sometimes it is frustrating when you don’t feel crazy. [Laughs.] But you’re put into a certain category. Naturally, you have to be, I guess. Like an anchor on the news; they’re wearing a blazer and they’re talking in this very serious voice, and you take that in and you think that they know what they’re talking about. So much is about the package. The package of what I bring, it’s definitely not the mainstream.

MJ: You’re pretty uninhibited. You make funky sounds, like hiccups and car impressions and even dolphin sounds. You sing about religion and advocate for contentious causes. How can we be so immune to the prospect of judgment?

RS: Well, I’m not a saint! We all are not immune to judgment. It’s part of being a free, and for lack of better word, integrated person—a person who is not just trying to be different things for different parts of their lives. That’s often what the world demands: They want your business face and they want your customer service voice, and they want your heart for other things. Our society asks for the segregation of self. So it’s not so much an immunity: You try to assert. You just try to practice all your life, the way that somebody would go to the gym. Explore. Dissect. Experiment with borders. And at the end of the day, if something is fun to you and you don’t want to do it because you don’t want to be perceived a certain way—you make a choice. And I struggle with that just like everybody else. But I like to be free.