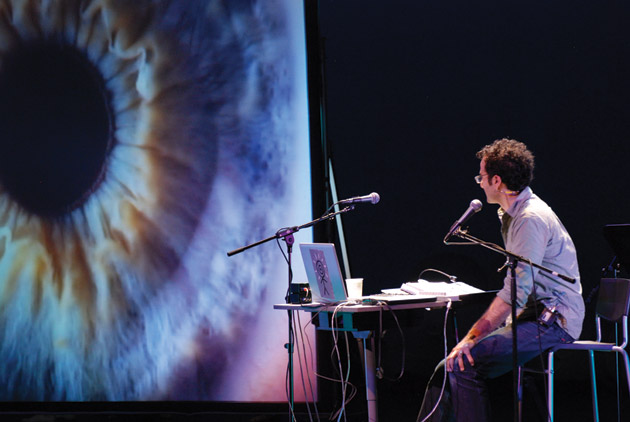 Not five minutes after I sit down with Jad Abumrad for chorizo eggs and a cappuccino at a hotel near the University of California-Berkeley campus, he’s helping me to digest what his molecular biologist mom does for a living. “She figured out,” he says, “this protein CD36 has a shape so that it can grab fat and put it into a canoe and propel it across the river, so to speak, into a cell.”

1. A musical analogy of a brain creating a thought, “Emergence,” Season 1

Breaking down complex ideas for the rest of us has turned into a glorious, if accidental, career for Abumrad, the 39-year-old creator and cohost of Radiolab, which originated a decade ago at New York public radio station WNYC. The show explores sprawling questions (How does symmetry shape our existence? What goes on inside our gut?) using a distinctive patchwork of memories, sounds, music, and humorous banter. It is now syndicated on some 300 stations, and its insanely popular podcast reaches 2 million listeners monthly. Early in the show’s evolution, Abumrad befriended 64-year-old National Public Radio trailblazer Robert Krulwich, who became his cohost in 2005.

But 2011 was one for the books. That March, Radiolab won a George Foster Peabody Award, the medium’s highest honor. In September, Abumrad landed a MacArthur “genius” grant—half a million bucks with no strings attached—for his reimagining of the medium. (To the MacArthur caller, he says, “I was like, ‘Shut up! Are you kidding me?'”) Finally, one of his personal heroes, This American Life host Ira Glass, published an online essay in which he admitted to being a bit jealous of Abumrad’s talents. Glass credited Radiolab with creating a “new aesthetic” and Abumrad with spinning out segments “calibrated and machined like an expensive handmade watch.”

Despite the accolades, Abumrad is a tad nervous this morning, and not on account of the caffeine. Tonight, for the first time, he and Krulwich will be performing Radiolab Live: In the Dark—a lightly rehearsed live spinoff—in a packed hall before a crowd of thousands. “There’s all kinds of crazy shit happening on it that could either be amazing or embarrassing,” he says, running one hand briskly through his wiry curls, black with a sprinkling of gray.

I see what he means that evening, when the lights come up on Abumrad and Krulwich, who look like they’re trying hard to swallow their nerves and stifle involuntary grins. Once the applause dies down, the pair launches into a narrative about vision, beginning with a series of slides showing close-ups of animals’ eyeballs. “Even Charles Darwin himself—Chuck D!—says, ‘The eye, to this day, gives me sort of a shudder,'” Abumrad declares. As he reflects on the evolution of photon-grabbing proteins called opsins, guest musician Thao Nguyen chimes in with whistles and guitar strums, while shadow puppets on a yellow screen reach out to snatch dots representing quantum packets of light. Before long, members of the renowned modern-dance troupe Pilobolus have taken to the stage wearing tissue paper masks; the audience sees six floating eyeballs doing the Charleston to the guitar riffs of cowboy-boot-clad Vietnamese rocker chick Nguyen. One of the dancers, wired for video, is held upside down by her fellow eyeballs as an image is projected through a slit in a piece of cardboard in her hands—creating a pinhole camera to show how our eyes function. The cohosts manage it all deftly, conversing almost nonchalantly as they juggle the swift-moving elements via projectors and control panels. “We’re not just about sound, people!” Abumrad exclaims.

This spectacle, on tour through fall, is not what you might expect from a guy who recalls being that shy kid who would “stand in the corner and watch” while others played. Raised in Nashville, Abumrad was more apt to spend his free time practicing the piano or playing alone with the rats in his mother’s lab—”that was like my after-school program.” Both of his parents were scientists, but he showed little interest. “I thought I’d be a musician and write music for films,” he says. He attended Oberlin College, graduating in 1995 with majors in creative writing and music composition. “I had no talent,” he remembers. “I was kind of lucky; I came out of school at a time when anyone could get a job working for the internet.”

So Abumrad built websites for the next few years before abruptly quitting his job, knowing it wasn’t what he wanted. “I took like six or seven months off and wrote all this music, and that was a moment of extreme anxiety,” he says. “My parents were like, ‘What are you doing?’ and I was like, ‘I don’t know. I just need some time off.’ But now when I’m scoring the show, I always pull stuff from those six months.”

“So much of our show is about bumping into the moment of revelation, and I want to feel the bump, you know?”

He eventually began hanging around WNYC, freelancing this and that. In 2002, the program director offered him a late-night Sunday slot on the AM band as a “DJ of documentaries.” The job was to string together whatever archival material he could get his hands on and make it work together. “We’d get all these really weird stories, like a BBC story from Zimbabwe or some sound-art piece about dogs, and you would have to somehow make a connection between them,” Abumrad says. It was a while before he realized that the station drastically dialed back its AM transmission power at night to comply with licensing requirements. “I was reaching 15 people maximum,” Abumrad says. “I was reaching the block!” But the small audience allowed for low-risk experimentation, and as he tinkered, “we started noticing that Jad was more interesting than some of the featured pieces,” says Mikel Ellcessor, WNYC’s program director at the time. “He has point of view, a unique take on the world, and he produces it all in a sonically engaging way.”

Ellcessor gave the new iteration a try on FM for a few days. It was not, as Abumrad tells it, an auspicious debut. For one, it replaced Fresh Air, and Terry Gross’ fans were not happy. “People hated it,” Abumrad says. But the station was supportive, and by and by the show discovered its stride. (To illustrate Radiolab‘s evolution, Abumrad makes airplane noises and a sinuous hand gesture.)

In late 2002, Abumrad was introduced to Krulwich, an Emmy winner and contributor to countless radio and TV shows who has been described as “the man who makes the dismal science [economics] swing.” The two hit it off and began fiddling around with ideas in the studio at night. “I’d have a little interview with a scientist, and he’d know some stuff about the same topic,” Abumrad says. “So we’d get in and I’d make a little theater thing and try and stick it in the show.”

What makes Radiolab so strangely addictive is its willingness to take risks as it re-creates visceral moments of human insight. For a segment on the discovery of “these tiny, eel-like things” we call sperm, Abumrad layers an erudite voice over gargling noises—think aliens swimming underwater. As the crude microscope of Antoni van Leeuwenhoek comes into focus, the narrator’s voice picks up speed and Gregorian choral music resounds to illustrate the 17th-century scientist’s moment of clarity. “You feel your perspective shift,” Abumrad marvels. “So much of our show is about bumping into the moment of revelation, and I want to feel the bump, you know?”

Yet truth be told, Abumrad’s own bump in fame and listenership has him a little worried. “All of the sounds and innovations of the show happened in complete darkness,” he explains. “Nobody was listening for a long time. But now, suddenly, the fact that people are listening has this chilling effect on just trying new things. So we’re just trying to shock ourselves into this mode of, ‘Okay, let’s just not be afraid to suck for a little while and just try some new stuff.'”

To wit, in May the Radiolab crew cut a deal with Creative Artists Agency to develop projects for film and television—the latest manifestation, apparently, of Abumrad’s driving instinct: “Let’s blow it up and try something completely nuts.”