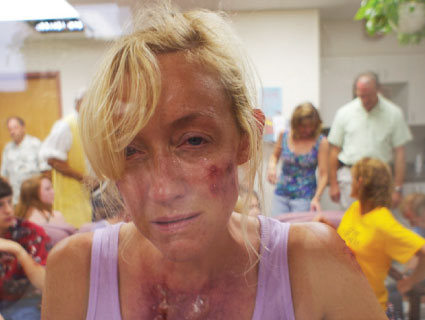 A still from "The Bay"Roadside Attractions

Mother Jones: How did this movie come about?

Barry Levinson: I was approached to do a documentary about the Chesapeake Bay. I started doing research and found there was already a great Frontline doc, but nobody cares­—people say, “It’s polluted, so what?” I said no. But a few months later, I thought, “We’ve gathered all this research; why don’t we tweak it for a theatrical release? We can scare an audience with a story that is 80 to 85 percent science and facts.”

MJ: Were you inspired by Jaws or Aliens?

“This is one of the few movies that uses a lot of science to frighten and unnerve.”

BL: No. The creatures in this film do exist. They go from small parasites on fish gills into isopods that eat fish from the inside. But if you’re playing around with the toxic soup, who knows what will happen?

MJ: Was it hard, weaving together all this unconventional footage?

BL: We made this film for $2 million, shot it in 18 days with a small crew using a lot of first-time actors, and used 21 different types of video cameras, including iPhones and cheap underwater video gear, to make it seem credible. This made for more-complicated editing. Everything had to be plotted out and done in one shot.

MJ: It’s notable that you don’t have a Hollywood hero arriving to save the day.

BL: There are good guys who try hard—the doctor in the local hospital, the CDC officials. They just don’t come up with the answers in time. We always want to believe we can take care of a problem, but there are some things we can’t take care of—look at the Gulf spill.

BL: It can be upsetting, but in Outbreak and Contagion, people die. Those are not happy-go-lucky films. It’s part of this genre that exists. And the investment is minimal, so you get to play with these things. We can entertain and at the same time provide a cautionary tale.

MJ: After all your big studio films, making a low-budget ecological horror film is a pretty different approach.

BL: Doing something different keeps you fresh. And this is one of the few movies that uses a lot of science to frighten and unnerve. The Chesapeake Bay is the largest estuary in the country. It’s at a tipping point—it’s up to 40 percent dead, and we just go about our business and say no big deal? That’s frightening to me.

Watch the trailer below: