“Whenever we sit down to write our stuff, we always say, ‘Man, this is the stupidest shit’—but then when it all comes together, it works!” On that note, Michael Thurber ends his break and heads back into Terminus Recording Studios, which is something of a landmark in the Manhattan Theater District. Paul McCartney and Liza Minnelli have recorded here. It’s in the same building where Tupac Shakur was shot five times.

“Hip Hop Shopping Spree,” a three-minute rap medley, is accompanied by a calculation of the cumulative retail value of the songs’ product placements—almost $57 million. One video samples the history of misheard lyrics, from Carl Orff to Pink. Another chronicles the history of wooing and seducing men in song, ranging from Aretha Franklin (“A Natural Woman,” 1967) to Riskay (“Smell Yo Dick,” 2008).

And another takes the theme song from the ’90s sitcom The Fresh Prince of Bel-Air and translates it into foreign languages and then back to English using Google Translate; the broken lyrics are performed to violins and a rhythm section.

“We were drinking a little bit, and that idea just sort of came out,” admits Joe Sabia, the group’s lead “conceptor” and director. “One of our main things is producing videos that also serve as a commentary on American culture. Google Translate is something everyone uses, so we put together a song everyone knows and a device everyone knows.”

CDZA’s twentysomething founders met in 2011 after Sabia, an HBO and Myspace alum, reached out to Thurber (composer and “chief music guy”) for help scoring a corporate video. Thurber knew Matt McCorkle, an audio engineer who has worked with the likes of John Legend and New Found Glory.

CDZA’s young performers are “at the top of their game, and we get to have them all in one place before they really make it big,” Sabia says.

Together, the new friends came up with the idea to create viral videos starring Juilliard-trained musicians, local rock and jazz artists, Broadway singers, and sketch comedians—done in a single Steadicam shot. “Our creative process looks like us sitting in an apartment, saying, ‘This would be funny, this would be cool,'” Thurber explains. “And then we begin to divide and conquer.”

Sabia and McCorkle work out the lighting, sound, choreography, and cinematography (with input from ace cameraman Kyle Fasanella), and Thurber hires the performers. They are “all in their 20s, and they’re phenomenal,” Sabia gushes. “They’re already playing Carnegie Hall, already on Broadway. They’re at the top of their game, and we get to have them all in one place before they really make it big.”

On a recent Sunday, CDZA was recording “Musical Puns,” which includes “Violynyrd Skynyrd,” a violin-led rendition of “Sweet Home Alabama,” and “Bassoon 5,” a bassoon-flavored version of Maroon 5’s “Sunday Morning.” Check out the behind-the-scenes footage shot and edited by my colleague Tim McDonnell, above.

On the day of our visit, the crew was a well-oiled machine—smart with a touch of goofy—and the shoot proceeded at a pace made possible only by the fact that everyone involved was a total pro. Each intricately staged video is completed in three to six hours, including rehearsal. Musicians seldom get their sheet music before they arrive on set—the Beatles video singers were first approached one day before the shoot. “The next day, it was like, ‘Boom! Let’s go!'” Thurber recalls. “It’s spontaneous and we don’t rehearse much—and we have it down to a science. There are no books you can read on how to produce this stuff. We did it on the fly.”

YouTube was sufficiently impressed with CDZA’s September 2011 debut—”History of Lyrics That Aren’t Lyrics” (1.5 million views)—that it extended funding and sponsorship. Since then, the outfit has produced live shows (including big corporate gigs), recorded in public places, and taken their acts on tour here and in Europe.

“Half the kids were screaming and crying. Some were just walking up to the camera and poking it.”

Not everything works, though. Last year, the dudes gathered a bunch of children in the studio to shoot a pair of videos. One of them actually made it online. The other will likely never see the light of day. “I have the video stashed away somewhere,” Sabia says, with a hint of trauma in his suppressed laughter. The idea was to have 18 elementary school kids cover 18 songs in a two-minute medley. The singers wouldn’t cooperate, however. “Half the kids were screaming and crying. Some were just walking up to the camera and poking it,” Sabia recalls.

Next, an angry parent confronted CDZA’s founders to ask why crew members were smoking weed on set. It turned out that smoke was wafting up from a studio on a lower floor where some hip-hop artists were recording. The whole episode was “a complete train wreck,” McCorkle says. But it was a good story, at least. 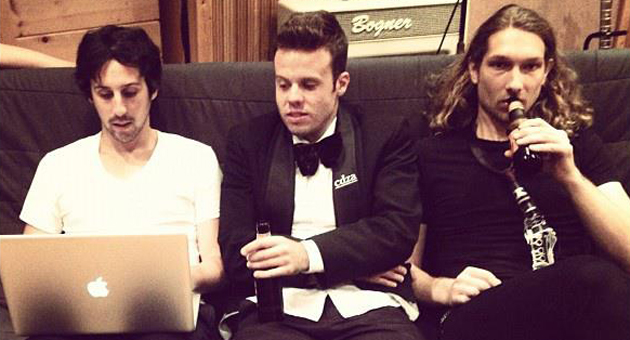