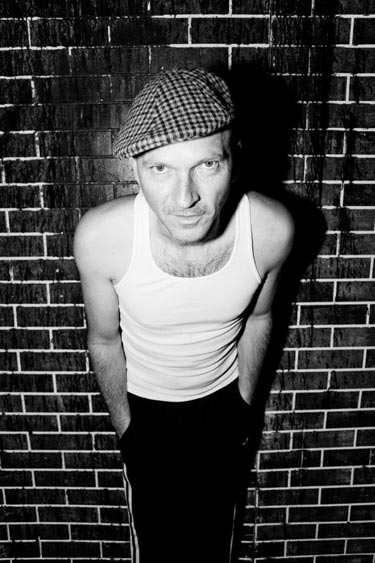 It’s 3 p.m. on a foggy August day at San Francisco’s Outside Lands music festival, but inside the Heineken Dome it feels like an after-hours party. Ori Kaplan, a founding member of the contagiously high-energy ensemble Balkan Beat Box, and formerly of the popular gypsy-punk band Gogol Bordello, had just performed as his solo alter ego, DJ Shotnez. Festival goers writhed and cheered to his mix of cumbia and Balkan horns, an amalgamation of sounds he calls Global Crunk Base.

In his trailer after the set, Kaplan sparks a cigarette and kicks his feet up on a table. His appearance at the fest was one stop on a short West Coast tour to test out his new material on a non-European audience. A local promoter stops by the trailer to offer praise. “Today was really excellent,” Kaplan says, grinning. “It was a super crowd, really open and excited. I love San Francisco.”

The Israel-born, Vienna-based DJ and multi-instrument has had a love affair with the City by the Bay since his early days with Gogol, and before that with the New York band Firewater, a pioneer of the immigrant punk sound. This week, Balkan Beat Box launches a new mini-West Coast tour before heading into the studio to work on a new EP. With its members spread to the winds—Kaplan in Austria, other members in New York and Tel Aviv—the band keeps its sound fresh by “meeting on airplanes” and bringing the sounds and influences they’ve collected from their side projects back into the studio. At Outside lands, we chatted about the virtues of DJing and the origins of melting-pot music at Mehanata, a little black hole of a bar on Manhattan’s Lower East Side.

Mother Jones: So what’s with the name, DJ Shotnez?

Ori Kaplan: It’s a Yiddish expression for mix of wool and linen—a forbidden mix. You cannot wear clothes that are made with this wool and linen mix because it’s synthetic and organic. It’s an ancient thing, but for me it means “illegal hybrid.” I mix Arabic percussion with samba and kudoro with gypsy music. It’s not very legal, but everybody loves it.

MJ: So how does DJing compare to performing in a band and playing live?

OK: A good DJ night is very fulfilling because you and I can see all these people are so happy. You have a chance to finally play all this shit on your laptop. It’s like being in your living room sharing your new discoveries, check this out, no check this out, and then you see 1,000 people dancing to it. But it’s nothing like what I’ve been trained to do, which is writing music, creating a sound, and performing it live. There’s nothing like live performance. So I would say DJing is my hobby.

MJ: You play a lot of instruments. Is there one that feels like your native language?

OK: I play flutes, clarinets, horns, synths, but yes, the alto sax is it. I’m trained as a jazz musician, I went to New School and studied jazz for four years. It’s like my whole life. John Coltrane, Charlie Parker—that’s my ABC.

MJ: How did Balkan Beat Box get its start?

“Some of our songs are kind of nonsense. But then we have songs like Political Fuck, about violent revolutions in the streets.”

OK: Eugene Hütz and Oren Kaplan [of Gogol Bordello; read our interview with Hütz here. ] and Tamir Muskat [of Firewater] were basically sitting around all day laying down these Mediterranean horn lines and electronic beats, and Eugene was rhyming and it was a real amazing workshop. We called it JUF, Jewish Ukrainian Freundschaft. It’s almost like BBB’s first album, but with Eugene. Then we had our own guests and singers and developed our own aesthetic.

MJ: It seems like BBB always brings in a ton a guest performers.

OK: We always went to clubs and Turkish restaurants in Manhattan and befriended musicians and all the immigrants—Iranians, Palestinians went to Mehanata as well.

MJ: I love Mehanata, with its ice cage and high-energy music. Though recently they’ve installed stripper poles downstairs, and after the word got out about how awesome it is, it seems to attract a more Bridge-and-Tunnel crowd now.

OK: Sasho [Alexander Dimitrov, the owner] has some strange ideas. But it really was good times. For a long time, it was like a second home.

MJ: What was it about that club that was so integral in bringing you guys all together?

OK: First it was Eugene’s party, and Joro Boro was inside as well. We were working the party, working the door. If Eugene wasn’t DJing, then one of us would. We made tracks for the party in the studio. I’d be vibing on this track, getting this Iranian flute, and then I’d play Balkan beats, making the track totally immigrant New York with this punk energy—and at night we would check the track at the club. If people were jumping then we were like, all right, we’ve got a good track. And if not, we’d tweak it up a little bit here and there, and then the next weekend we’d try it out again. It was this golden era, with lots of immigrants—Mexicans, Spanish, Turkish, Albanians, Bulgarians, Israelis, Russians, Ukrainians—all coming together and creating a new soundtrack for the city.

MJ: Do you feel like your music is political?

“Some DJs and dance producers don’t want to touch any serious subject. They just want to create a party.”

OK: Sometimes, but not always. Some of our songs are kind of nonsense. But then we have songs like Political Fuck, about violent revolutions in the streets. It was like the video of the week for Al Jazeera during the Arab Spring—it was amazing, this Israeli band on Al Jazeera! Our political belief is just that you have to respect the other person to create a healthy dialog. The political message comes through the music, we don’t even need to say it. But the last album was more explicit, because we really wanted to explain what we are about. I wish more bands would do that. Some DJs and dance producers have beat music, electronic dance music, but they don’t want to touch any serious subject. They just want to create a party. I don’t think having a message distracts from dancing. It’s just like an untouchable thing, but it shouldn’t be.

MJ: Maybe they are afraid of being divisive.

OK: They have so much power, but the young people are into being political. Sometimes I think DJs underestimate their audience. They think it’s just about sex, but it’s also about young people and fighting the power.