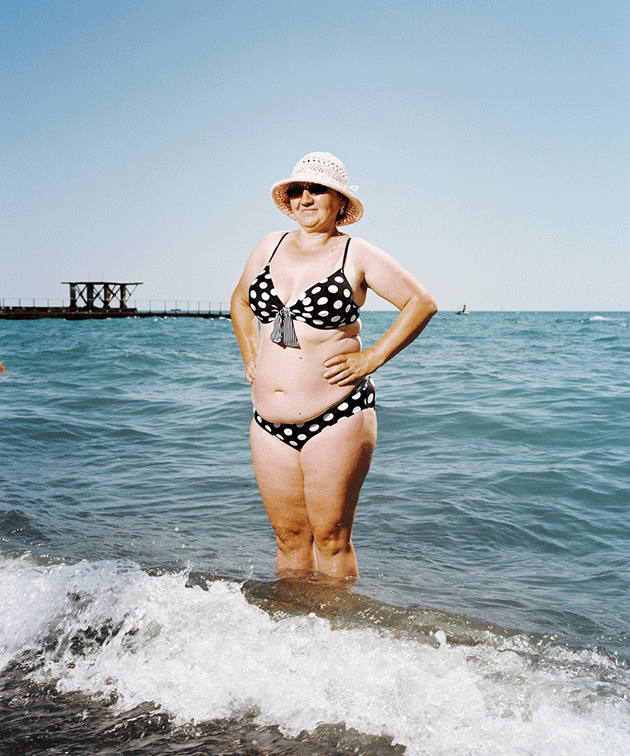 Tatyana Mikhailovna Trubina, 49, on holiday. Sochi, 2011. All photos by Rob Hornstra / Flatland Gallery, from An Atlas of War and Tourism in the Caucasus (Aperture, 2013).

By now, you may have heard that the upcoming Winter Olympics in Sochi, Russia, is a shitshow. With its $51 billion price tag, Russia’s LGBT crackdown, reports of forced eviction, unlawfully detained migrant laborers, rampant embezzlement, and environmental degradation—it’s been the PR equivalent of herpes. What you may not know is that Sochi itself lies on the doorstep of long-simmering ethnic and territorial conflicts. Just across the mountains from the Olympic Village is the North Caucasus, a chain of seven autonomous republics that are home to more than 30 nationalities and as many languages. It’s a volatile region roamed by separatist groups, Islamic Salafists, and terrorists-in-training. Almost all of Russia’s major terrorist events originated there, including the 2010 Moscow metro bombing that killed 39 people and injured dozens more. (Tamerlan Tsarnaev, one of the Boston Marathon bombers, spent six months in Dagestan and Chechyna in 2012—a visit the FBI is still investigating.)

South of the Caucasus and abutting Sochi are Georgia and its two breakaway states, Abkhazia and South Ossetia. Although Georgia considers both countries part of the motherland, each has recently gained limited diplomatic recognition, but little has changed. Poverty and violence are endemic: Georgia’s 15 percent unemployment rate and rampant IV drug use has sapped the country. Rolling blackouts keep Tbilisi, the capital city, permanently on edge. Meanwhile, in Sochi, stadiums resembling spaceships have risen up overnight, while Vladimir Putin’s soothing face appears on television to assure everyone that “Sochi is going to become a new world-class resort.” 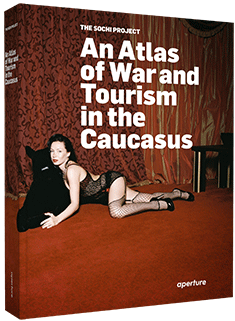 Surreal may be one of the more abused words in our language, but what has happened in Sochi over the last six years is undeniably surreal. A new photobook, The Sochi Project: An Atlas of War and Tourism in the Caucasus, documents the strangeness from the inside out. A five-year collaboration of photographer Ron Hornstra and writer Arnold van Bruggen, it introduces us to the real Sochi and the rugged individuals who call the Caucasus home.

A resort town on the Black Sea, Sochi is often considered Russia’s summer playground—but it has seen better days. Its selection as an Olympics host city is bewildering in light of how unprepared it was to accommodate a crush of foreign spectators. Here’s how coauthor van Bruggen describes Sochi circa 2009: “The airport is like a bus stop, the kind more common in the hinterland of the former Soviet Union than in an international travel destination. One narrow road clings to the endless coast heading northwest. Another climbs up into the mountains and is so treacherous and winding that it claims countless victims every year. Sochi is a coastal city without a commercial port. All goods are transported along this single, busy coastal road, which is not designed to handle the traffic. The result is daily gridlock and endless traffic jams. For the Games, all the infrastructure and facilities have to build from scratch.”

So Sochi has become a boomtown. New condos and hotels hack the skyline; restaurants, bars, and coffee shops pop up with dizzying speed; a fresh topography of highways slices the region. But what happens after the Games? Will all the development bring an economic rejuvenation, or will the new construction go the way of the massive sanitariums—Lenin’s “palaces for the proletariat”—that now stand obsolete and ruined? Either way, the region’s fate may boil down to etiquette. As one local told the authors: “The Soviet mentality and rudeness that still prevail here scare people away.” 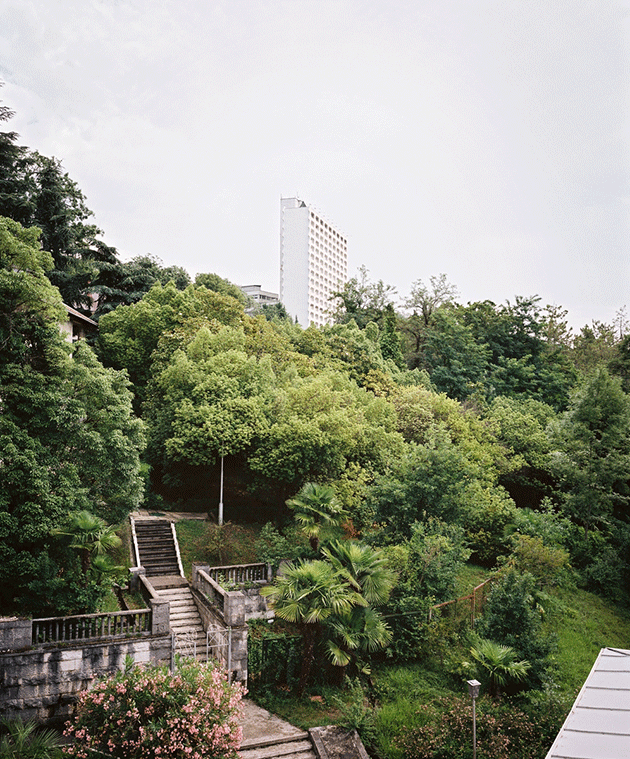 Hornstra’s portraits nail beautifully the regional cocktail of stoicism and gloom. His subjects include an old man building his own coffin in an apartment by the Black Sea, a former cop who lost his legs and an arm and is now confined to bed; the postmaster of Abkhazia (a country that doesn’t officially exist); a young stripper who hopes to quit the gig and raise a family. Interspersed throughout are harrowing inventories of death, drugs, poverty, exile, and almost constant warfare. 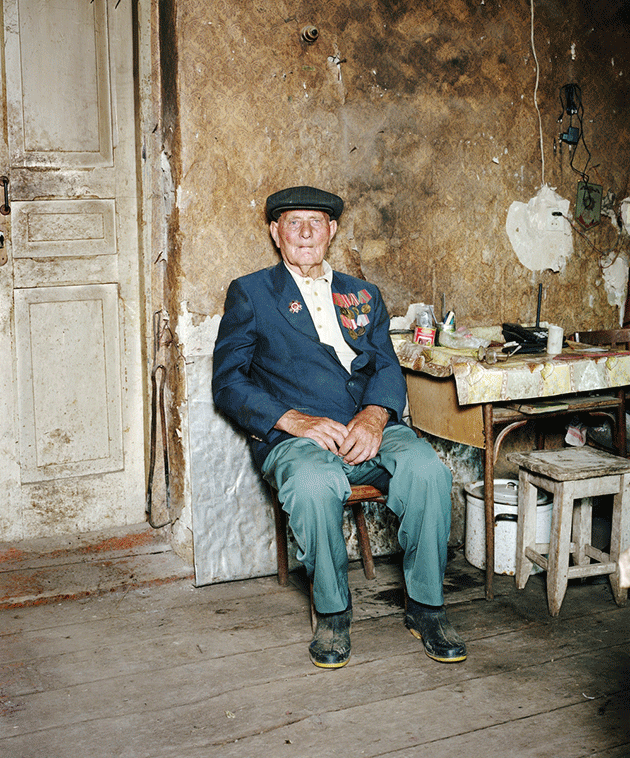 Roman Eloev, 88, who fought for the Soviets in his shed near the Georgia border. Ortshosa, South Ossetia, 2011. Rob Hornstra / Flatland Gallery 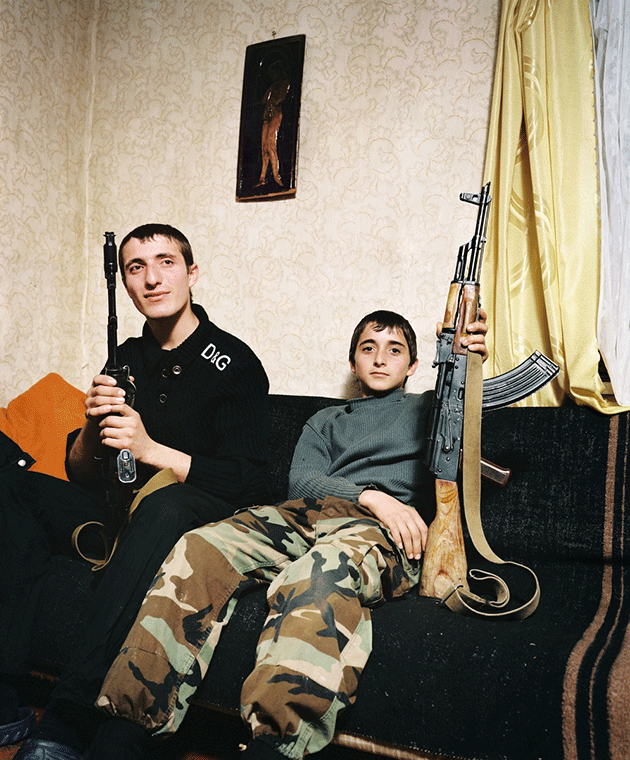 The subject matter is heavy, but van Bruggen leavens the despair with absurdist observations. He encounters, for example, a mock African king presiding over the beach on a leopard-skin throne while tourists queue for pictures. Elsewhere he describes the smells of “sunscreen, sweat, alcohol, and roasting meat” that pervade the seashore. Hornstra also does his part to inject levity: A portrait of a beefy woman back-lit against the sea suggests an ironic fashion ad, while another of a debonair senior in a Speedo thrums with wryness. You almost believe these beachcombers occupy a land of perpetual leisure, and were it not for the Brutalist Soviet architecture on succeeding pages you might go on believing it. 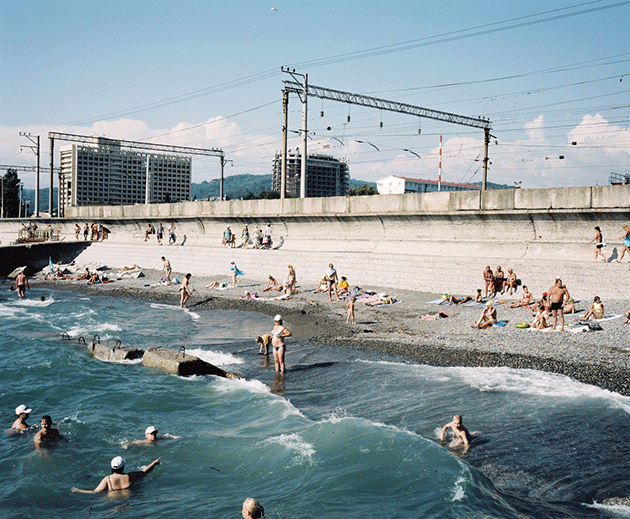 But leisure, where it’s to be had in Sochi, comes amid torrential amounts of vodka; you can practically hear the Stoli bottles chiming in the background of each photo. In one memorable moment, Hornstra and van Bruggen are invited to a family dinner that quickly erodes into a booze-soaked sideshow that ends with the grandfather keeling over against a tree. As amusing as such incidents may be—and as consonant with Russian clichés—they also suggest a deeper unhappiness. The North Caucasus is the land that time forgot, and its inhabitants live a few pegs below the poverty line. An atmosphere of malaise hangs over shots of Tbilisi and its apartment interiors; even people’s living rooms have an industrial quality. It’s easy to imagine the rigor mortis of the furniture and the air’s slaughterhouse chill. 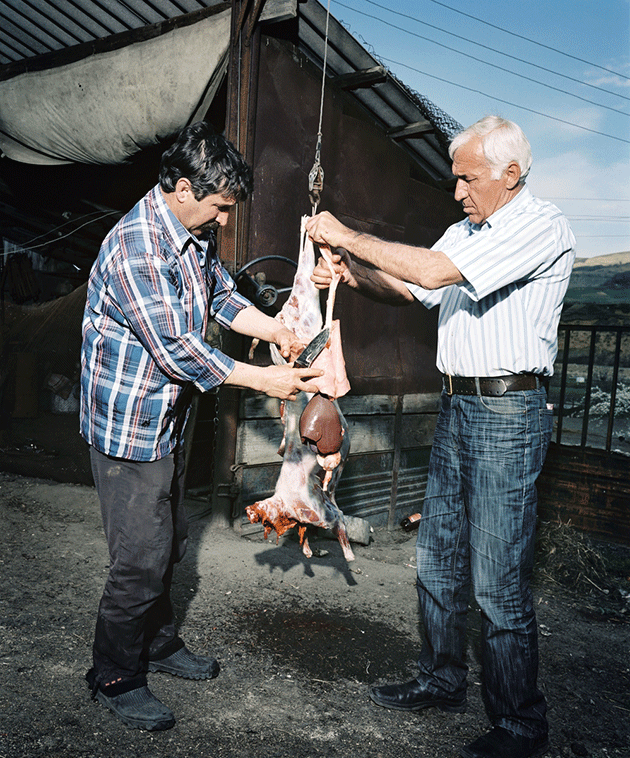 The exteriors aren’t much brighter. Caucasian hamlets share a dispiriting grayness—wrecked factories, eternal mud, battered grass. Nonetheless, Hornstra’s camera embraces the landscape, lending even the ugliest stretch of countryside a painterly grandeur. Some of his most striking shots chart Sochi’s development from a relative backwater to something more faux-chic. Where there was once a postcard-perfect hillside of trees there now exists an incongruous high-rise; where there was once an empty field, there’s now a floodlit skating rink. 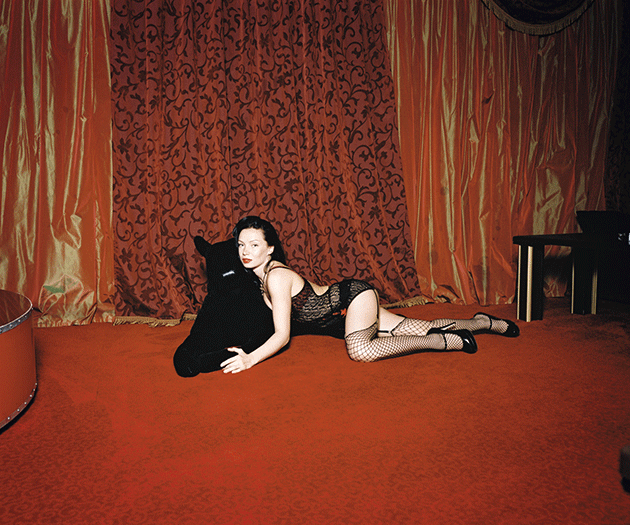 Olga, twenty-nine, is the manager of a strip club in Zhemchuzhina Hotel (meaning “pearl”) in the center of Sochi. 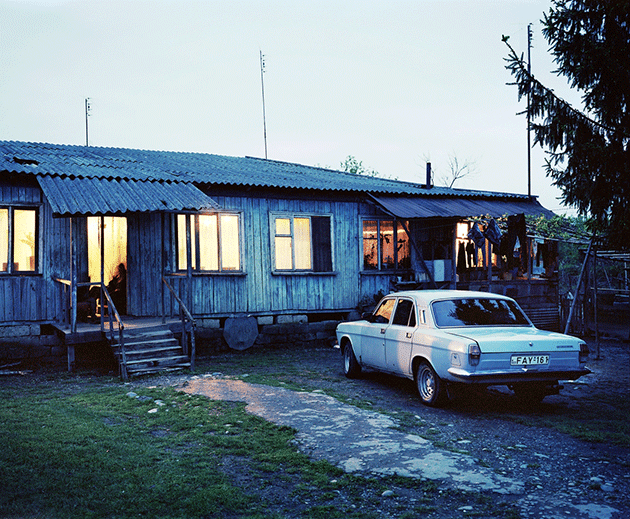 A kindergarten used as shelter for Abkhazian refugees from the Georgian-Abkhazian war in 1992-93. Shamgona, Georgia, 2010.

The copy on the dust jacket compares the book to Let Us Now Praise Famous Men, the classic 1941 collaboration between writer James Agee and photographer Walker Evans. Although that’s marketing fluff, The Sochi Project does have a magisterial quality beyond just its physical heft (which, at 412 pages, is considerable). The scope of the project, its breadth and doggedness, is awesome. And while few individual photos are ones for the ages, their cumulative effect is a book more brutal, lyrical, and ambitious than almost any other photobook this year. It’s a major achievement.