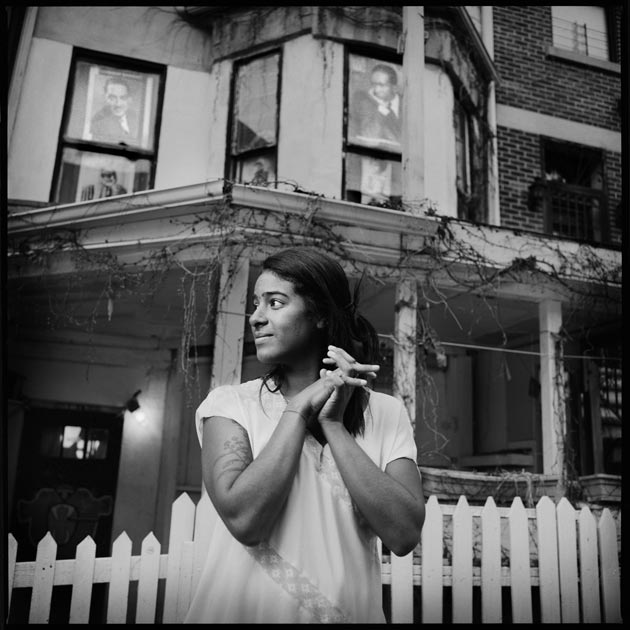 Leyla McCalla is a singer, songwriter, and multi-instrumentalist (cello, banjo, guitar) who performed for several years with the Carolina Chocolate Drops. Out this week, her Kickstarter-funded debut solo album, Vari-Colored Songs: A Tribute to Langston Hughes, weaves together Hughes’ poetry, Haitian folk music, and her own original songs. The photo was shot in Harlem, across the street from Hughes’ home of 20 years, where McCalla spoke with Jacob Blickenstaff about why she chose Hughes as her muse. The following is in her words.

Langston Hughes is a focal point in my life, and inspired me to pursue a creative path. I read both of his autobiographies. One is called The Big Sea, and the other is I Wonder as I Wander. The Big Sea is about his early life as an artist, his childhood and upbringing.

“I think it was eye-opening for Hughes to realize that black culture wasn’t just of the United States.”

Hughes has all these different layers of artistry. His voice was so simple, but it encompasses so many issues and subtleties of our culture. He’s the Duke Ellington of words—painting the most incredible portraits with simple musical ideas that just come together in amazing ways. I feel like he does that with concepts, words, and color in his language. I Wonder as I Wander starts in Haiti. It was interesting to me that he traveled so much, and that that was such a big part of his work. I think it’s under-acknowledged and it made me realize that being an artist is hard work. He wasn’t just sitting in Harlem writing poems all day, you know?

He connected with a Haitian writer named Jacques Roumain. Through him, Hughes was exposed to this pan-Africanism—black culture in a more universal way—and I think it was eye-opening for him to realize that black culture wasn’t just of the United States, but that it existed everywhere.

That resonated with me. My family’s from Haiti. I’ve been exposed to the culture of black America, I’ve lived in Africa, and even from recently going to Europe I have a better understanding of the racial relations in places like France and the UK. I feel like the work that he started continues today. It was really important to acknowledge that through this album.

Finding the sound was a pretty intuitive process. I followed my ear: What I heard is what I tried to make happen. I heard the arrangements as sparse, and wanted to focus on bringing the words to the forefront. I heard steel guitar, which has a dreamy, otherworldliness to it that echoes a dreamy quality in the poems.

I’ll usually pick up an instrument as I read through a poem. I’ll use GarageBand to flesh out some ideas and try different things, but the connection that I feel is pretty immediate. With “Heart of Gold.” I just played that A minor and C9 chord for a while, and then was playing it in 5/4 time—I can’t remember how it really happened.

The original title for the poem was “Vari-Colored Song,” but I had always called it “Heart of Gold.” When it was time to name the album, a friend asked if it’s too weird to call it “a tribute to Langston Hughes?” and I said, “No, I think that makes it stronger,” and then I thought, what about Vari-Colored Songs for the title? I felt like there were so many different things happening in the record, and I felt like conceptually the strongest way to tie it all together was to continue to use his words.

“Contact” is an occasional series of artist portraits and interviews by Jacob Blickenstaff.