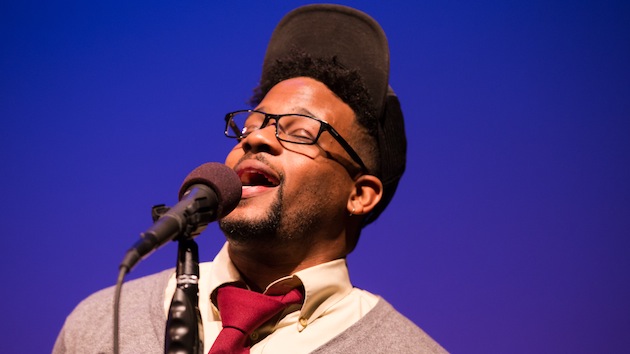 At first glance, Open Mike Eagle, born Michael Eagle in Chicago in 1980, cuts an unassuming figure. But that’s what struck me the most as I listened to his new album, Dark Comedy, on the bus to work. Any of these people could be Mike, I realized, looking around. And that’s what’s so beautiful about his music.

Here’s a rapper who can follow the exhortation “G-g-get up and dance / g-g-get up and dance” with the admission, “I w-w-wipe my son’s ass / And get shit on my hands.” He does this on “Qualifiers,” a moving single he debuted in a laundromat. At his most boastful, you might hear a line such as: “I’m president of the rappers that don’t condone date rape.”

Eagle brings something refreshing to a genre that can often feel suffocated by its tropes.

In a genre that can often feel suffocated by its tropes—braggadocio and unreflective swagger filtered through a lens of urban grit or visions of power and glory—Eagle dwells instead on personal experiences that speak from America’s vast middle: educated, underpaid, and self-doubting.

Slowly, quietly, he has built up a rep for doing things differently. Last summer, LA Weekly anointed him the “hottest thing in indie rap.” A few months later, Impose magazine crowned him “rapper of the year.” His latest full-length effort, released by Mello Records in June, continues to wow (and discomfit) critics far and wide, with Pitchfork deeming him “a singular kind of weirdo” in a glowing review, and The Needle Drop‘s Anthony Fantano praising his standalone style: “part eccentric philosopher, part charismatic free spirit, part introspective brain-picker.”

But the news doesn’t really seemed to have reached Mike Eagle. If you ask him, he’s still the same kid that started rapping seriously as a high school sophomore after becoming enamored with the oppositional spirit of hip-hop as described in Bomb the Suburbs, a book by graffiti artist and activist William Wimsatt. “I got into rapping, graffiti—I was terrible at it—and break-dancing, all at the same time,” he says. “I’ve never really not rapped. And when I’ve written songs they’ve always reflected whatever experience I happened to be living.”

Characteristically self-effacing, he adds: “I don’t necessarily think what I’m doing is really progressive in any way, just a lot more personal than the mainstream—and a lot more dependent upon the way I see the world.”

Eagle’s experiences, in any case, diverge from those of the typical rap mainstays. For one, he studied psychology at Southern Illinois College and went on to teach special education after graduating in 2003. He got into rapping full time six years later, after getting laid off from his latest teaching gig.

For Eagle, college was “the backdrop to a lot of really important moments—things that happen to you when you’re truly socially and emotionally vulnerable.” In the dorms, as a resident advisor, Eagle met and befriended actor and comedian Hannibal Buress. They’ve worked together ever since—Buress plays a satirical guest role on a track from Dark Comedy. “He was a great resident,” says Eagle. “He never did anything I had to write him up for—which was a pretty short list anyway ’cause I broke most of the rules right along with my residents. I used to get in trouble for not having enough write-ups, so I’d bust the same couple of kids for beer like once a month.”

“I used to battle a lot, which kind of teaches you how to construct raps that make a point,” Eagle points out.

As the album title suggests, Eagle relates to comedy in a complex way. Even his song with Buress—by far the album’s “jokiest”—can’t help but make serious observations, rhyming “CIA torturers” with “bank forfeitures” after reminding us that “sharks in the boardroom program for guppies.” Humor “is very useful in attempting to express concerns that might be very personal to large groups of people,” ­he explains. “I think we see it a lot in social media too. The default approach to communicating to the masses seems to be ‘lols.'”

Not that his background necessarily jibes with his often-lighthearted style. “My experience as a child was a little out of the ordinary and not really the best equation for success,” he says. “My mom had some issues with the law and my dad, although very present in my life, always lived across the country. I was raised by my mom’s parents very near the South Side Chicago projects in the ’80s, so things were very dangerous. A lot of my mom’s generation had real bad drug problems.”

How did he manage to escape all of that? “I think sheltering was a part of it,” Eagle says. “I also think there was some good fortune at play as well. I had a lot of overdosing and robbery and abuse very close to me, but I managed to never really experience a lot of it firsthand.”

What he did get a lot of firsthand was hip-hop culture. “My first rap styles were very punchline oriented,” Eagle says. “That was the style of the South Side of Chicago at the time. I used to battle a lot, which kind of teaches you how to construct raps that make a point. So when I transitioned into making songs with concepts, I knew how to build an effective framework to structure my points around.”

In 2012, Eagle co-authored a scientific study on “the neural correlates of lyrical improvisation.”

To be sure, his concepts are as about as far into left-field as one can stray in contemporary rap. His is an aesthetic free from mainstream motifs—like the worship of wealth and excess—that even alternative icons like Riff Raff and Lil B constantly deploy (albeit in exaggerated form). Eagle creates his own entry points. Consider his haunting, oblique meditation on urban courtship, “A History of Modern Dance,” set over an ethereal beat that sounds like a skipping horror film soundtrack. Or “Informations,” his laugh-out-loud funny reflection on the absurdity of the internet age, featuring rap enfant terrible Kool AD. (“When I pass gas, it sounds like a fax machine,” Eagle raps in faux astonishment.)

Despite his positioning as a hip-hop outsider, Eagle is motivated deeply by a sense of community: More important than setting yourself apart as an individual, his songs seem to suggest, is being honest with yourself and others. This drive to empathize is what motivated Eagle to study psychology, he says, and, indeed, to co-author a 2012 study on “the neural correlates of lyrical improvisation” with researchers from the National Institutes of Health. It appeared in Scientific Reports, an open-access arm of the British journal Nature. Here’s a taste:

Twelve male freestyle artists (mean age, 30.3 yr; range, 23–36 yr) were studied. Participants had at least 5 years of professional experience, defined as performing in front of an audience, or recording projects for public consumption, and receiving payment for this work. The range of professional experience across participants was 5 to 18 years, 9.8 ± 4.3 (mean ± s.d.). All participants were right-handed native speakers of American English.

Eagle identifies Los Angeles producer Daniel Rizik-Baer, another co-author, as the prime mover behind Eagle’s 2012 trip to Uganda, where he made a five-song EP with emerging Ugandan rappers and would “weird the people out,” he later rapped, with his “no bitches, hoes” style.

Open Mike Eagle only seems to be getting weirder with time. And along the way, whether he knows it or not, he’s forging a viable path forward for his art form. Hip-hop can thank him later.