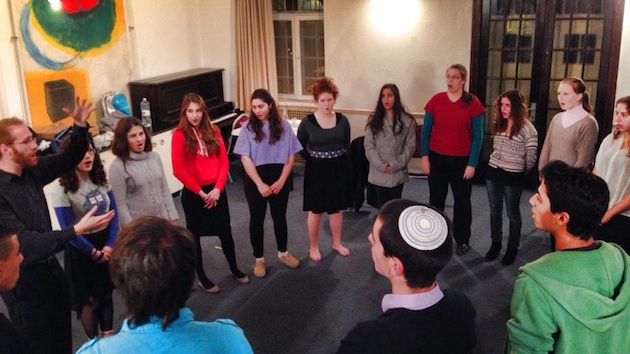 They come to the Jerusalem Youth Chorus from as far away as Ramallah (a Palestinian outlook in the occupied West Bank) and a moshav (a Jewish settlement) outside of Jerusalem. They speak Arabic, Hebrew, and often a bit of English. They are five tenors, eight sopranos, six altos, and seven basses. They are 13 Palestinians and 13 Israelis, all high school students. Some are friends of friends with Gilad Shaar, Naftali Frenkel, and Eyal Yifrach, the Israeli teens whose kidnapping and killing sparked the latest round of clashes; others grew up around the corner from Muhammad Khdeir, a 16-year-old Palestinian boy who was murdered in the wake of those kidnappings.

For the past two years, the chorus—the only mixed Israeli-Palestinian choral group in the Holy City—has met weekly in Jerusalem to sing at the international YMCA, one of the few places Arabs and Jews can meet comfortably. This summer, they’ve rehearsed several times a week—despite the rocket launches and airstrikes—in a flurry of preparations for their first international singing tour. It took them last week to Kyoto and Tokyo, where they could enjoy a break from the troubles at home.

Here the kids perform “Adinu,” based on a poem by the Sufi mystic Ibn ‘Arahi: “I believe in the religion of love, wherever love is found.”

Micah Hendler, the chorus’ founder and director, didn’t know whether anyone would show up for rehearsal on the day after Khdeir was killed, especially anyone from Palestinian East Jerusalem, in whose Shu’fat neighborhood the boy’s body was discovered. “Don’t risk your safety,” he recalls telling them. But half of the kids made it anyway—including half of the Palestinians.

“Then this girl comes in from Shu’fat,” Hendler says.

“Well, I woke up to gunshots this morning and it was pretty awful,” she responded in Hendler’s recollection. “But being in my house kind of made me crazy because there was so much violence, so I just left my house and walked down the street and out of Shu’fat. Soldiers tried to stop me but I just ran away. I’m so glad I’m in rehearsal, and there’s nowhere else I’d rather be.”

The songs they sing aren’t usually about peace directly, but more about things that leads to it: empowerment, community, love, loss, connection to home. (“Peace is really cliché here now,” Hendler says.) At recent performances, they’ve drawn from a pool of about a dozen songs, from “Akanamandla” (a South African freedom song they sing in Zulu, Hebrew, and Arabic) to “Rolling in the Deep” and “Seasons of Love.” Earlier this year, the chorus was featured on East Jerusalem/West Jerusalem, an album by the Israeli singer and activist David Broza. Later this fall, Hendler’s group plans to shoot a remake of Philip Philips’ “Home” with YouTube popstar Sam Tsui.

Jerusalem Youth Chorus is about more than just music, though. Half of each three-and-a-half-hour rehearsal is devoted to dialogue: The kids openly discuss what’s going on between their peoples, with trained Arab-Jewish facilitators and translators on hand to assist.

Hendler started the chorus on grants and donations in 2011, five months after completing college. The ingredients were all there: He’d spent his summers growing up at Seeds of Peace, a Palestinian-Israeli peace camp; comajored in music and international relations at Yale; performed with the school’s prestigious a cappella group, the Whiffenpoofs; led community sing-alongs; and taken classes in Hebrew and Arabic. “This is probably his destiny,” a Yale rabbi told a school newspaper during the choir’s first year.

“I tell people I’m American,” says the choir director. “Some of the kids probably still don’t know what religion I am.”

Hendler, an American Jew, says he identifies with both sides in the conflict. One of his favorite sayings comes from Rumi, the 13th-century Persian poet and mystic: “Out beyond ideas of wrong-doing and right-doing, there’s a field. I’ll meet you there.”

But in a city like Jerusalem, it’s easy to get boxed in. “I tell people I’m American,” Hendler says, “which just means I’m not from here. Some of the kids probably still don’t know what religion I am.”

He recruited from schools in both East and West Jerusalem, promising students that they would learn to speak and sing in English as well as their native tongues, and raising the possibility of an international tour. Beyond musical talent, he was looking for open-mindedness and “positive energy”—traits that are difficult to audition for. For many, speaking during the dialogues is much harder than the singing.

Jerusalem, after all, is a city where Arabs and Jews live on opposite sides of town, attend segregated schools, and shop at separate stores. Within the safety of the rehearsal space, the singers befriend their counterparts from the other side. And then they go home. They get on Facebook and forget they have new friends who might take offense at, say, their liking of friend’s post that derives from the other side’s narrative. Or they’ll post something in the heat of the moment, when they’re angry about some development in the conflict. Their new friends will be hurt.

“Facebook might be our biggest problem,” Hendler says. He’s still not sure how to teach social media etiquette, or how to navigate the (so far limited) backlash to the chorus from the singers’ own communities. One Jewish girl openly challenged her rabbi in school to defend the choir; some parents begrudgingly let their kids come to rehearsal.

But they keep singing, despite it all. And because they live in a place where endless dialogue has so far failed to keep the peace, they sing first. Only then do they talk.