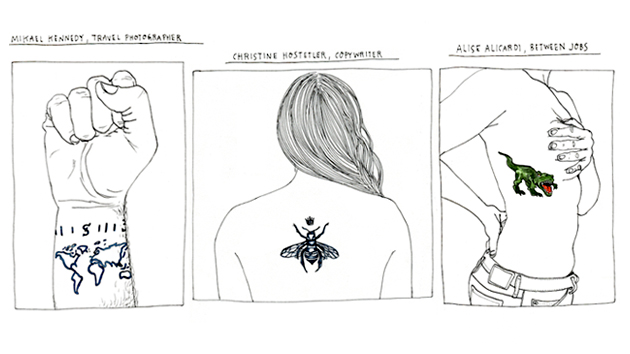 Illustrator Wendy MacNaughton has no shame in asking our server about the tattoo peeking out from under her right armpit. We’re at Magnolia Brewery, a pub in San Francisco with a soft glow and a hint of an edgy past. The petite, bespectacled waitress explains that the hen and chicks inked on her inner bicep come from a kid’s book her grandma used to read to her at the childhood farm. After the server disappears to retrieve our fries, MacNaughton says: “If someone is choosing to permanently mark their body, there is a story behind it.”

She should know. MacNaughton has spent much of the last two years on a new oral-history book, Pen and Ink: Tattoos and the Stories Behind Them, out October 7. The testimonies accompanying her expressive drawings serve as glimpses into the subjects’ earlier selves—”my sister and I would race after bees in the lavender bushes and try to pet them without getting stung”—or mantras to live by—”a gray-blue stripe down my spine…symbolizes ‘balance.'” Some insignias represent disturbing moments: incarceration or chemo or lost family members. Others are just goofy: A male comedian sports a cursive “Whoops” on his arm, and one woman inked a T. rex on her ribcage as a reminder “not to take myself too seriously.”

The project was the brainchild of Isaac Fitzgerald, co-owner of literary website The Rumpus and the books editor at BuzzFeed. Past bartending gigs had taught Fitzgerald that quizzing fellow mixologists about their tattoos was an easy ice-breaker. As his interest in publishing took hold, he noticed that most books about tattoos merely relied on photographs, which, in terms of capturing the essence of a great tattoo, “leave a lot to be desired.”

One day, Fitzgerald was having a drink with MacNaughton, whose playful renderings have adorned the pages of the New York Times, the Wall Street Journal, PRINT, and several books. “I said, ‘Here’s this really dumb idea!'” Fitzgerald recalls. “And I think she was like, ‘That’s not that dumb.'” So, in 2012, they launched a Tumblr called Pen and Ink, which pairs MacNaughton’s tattoo portraits with the subjects’ personal stories. Before long, their project had attracted 80,000 followers, including rock star fans such as Neko Case and Colin Meloy. 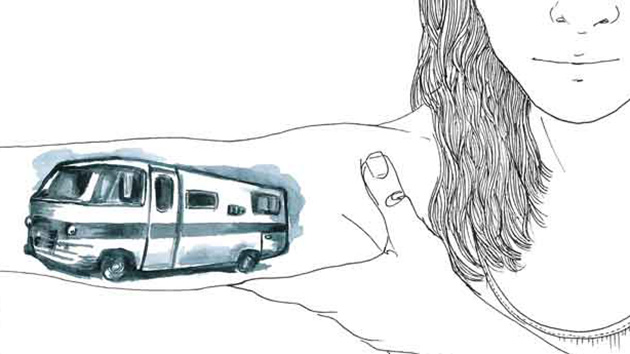 Drawing hadn’t always come so easy for MacNaughton. After graduating from Pasadena’s City Art Center College of Design in 1999, and making, in her words, “the worst conceptual art ever,” she abandoned her pen in exasperation. Instead, she went to grad school for international social work, and spent several years working on political campaigns in East Africa.

The drawing bug bit again after she moved to the Bay Area and began sketching fellow commuters on the train to work. Something had shifted: “In art school it was all about expressing my analysis of the world, and my ideas.” But now she wanted to use her talents to tell other people’s stories. Her sketches of life in the city—street characters, found objects, or moments on a bus—became an online series for The Rumpus, culminating in a 2014 book, Meanwhile in San Francisco: The City in its Own Words. 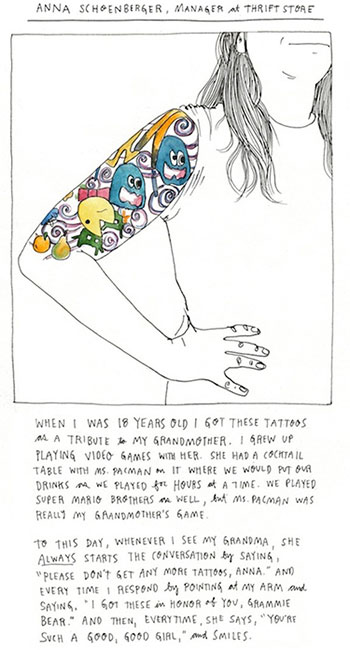 Interviewing diverse tribes for Meanwhile was a great warmup for Pen and Ink, MacNaughton tells me. Nowadays, it’s impossible to predict who might have a tattoo: anyone from “people who work downtown in an office on a top floor in a suit to somebody who doesn’t work who has tattoos all over his face,” she says. She shoots me a sly look. “I get a possible tattoo vibe from you.”

When I break the news that I’m actually not among the 23 percent of Americans who are inked, she counters, “You just don’t have one yet.” (I’ve recently become obsessed with FlashTats, those sparkly temporary tattoos designed to look like jewelry. Gateway drug?)

MacNaughton, who has wavy rust-colored hair and sparkly eyes, sports two tattoos herself—both equally embarrassing, she admits. She points to one on her forearm: a triangle connecting three circles meant to represent a philosophical “mirror theory.” “There was a point when I would have removed this. But I’m really glad now that I didn’t.” Doing Pen and Ink, she says, “helped me embrace that attitude that this represents a time in my life when I was more sincere. That was a great time. And I am so glad it is not that time anymore.”

MacNaughton and Fitzgerald are already busy with a sequel, Knives and Ink, an illustrated series of tattooed chefs and their tales. MacNaughton’s not done inking herself, either. “My next tattoo,” she confides, “is Grandma-related.” 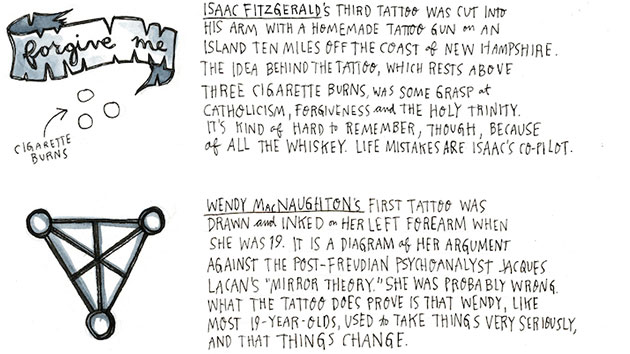 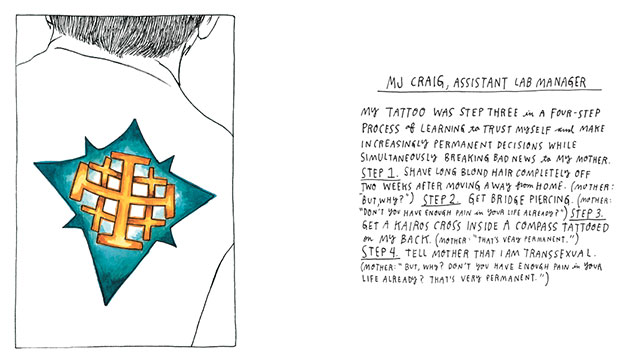 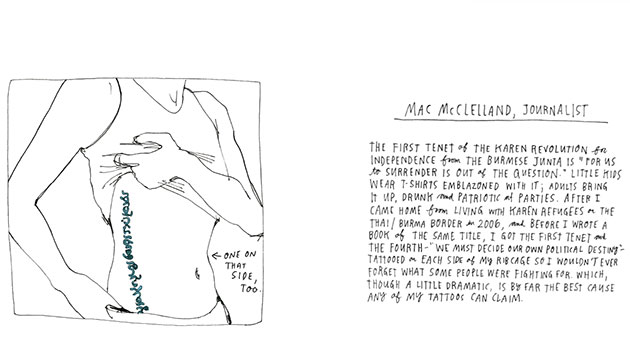 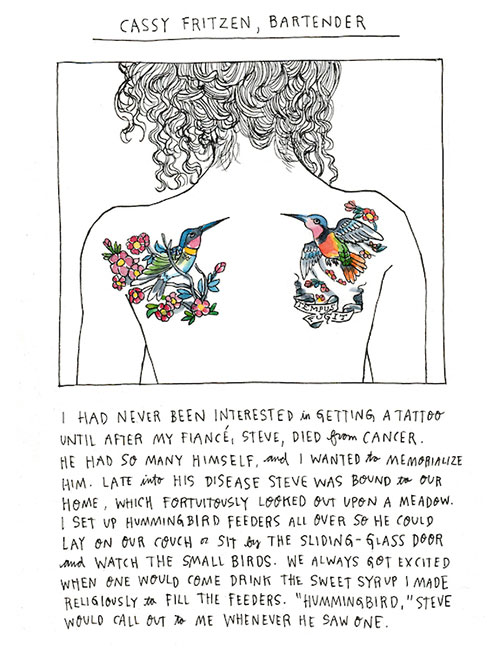 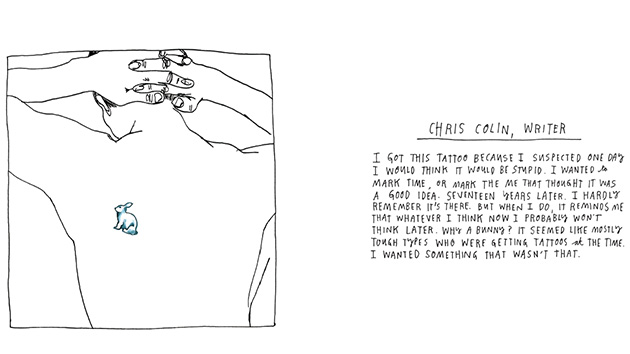 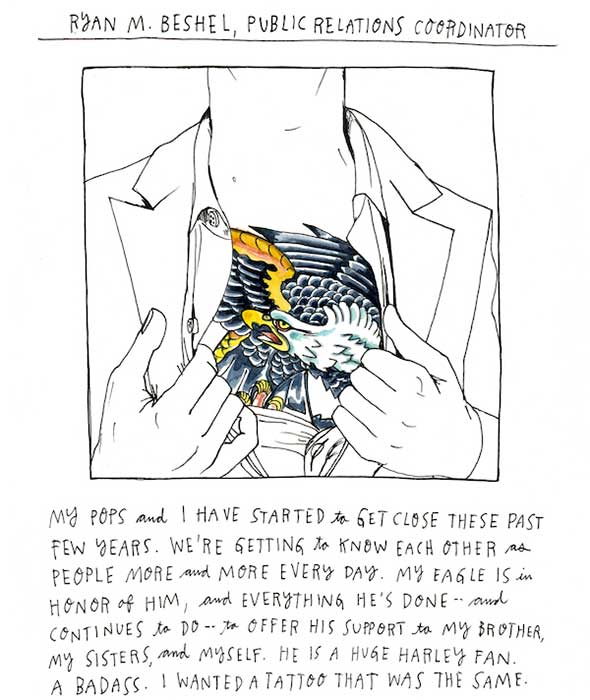