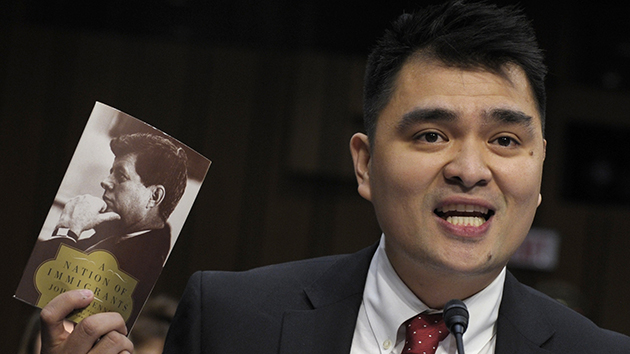 “Do you think some people treat you unfairly because you’re white?”

“Do you feel you’re missing out on an important job, school, or other opportunity because you’re white?”

These questions were included in a recent casting call for an MTV documentary in Washington DC. It swiftly raised eyebrows across the internet: Do white people really need yet another medium to showcase, well, white people problems?

But when it came out that the man behind the documentary was actually journalist and prominent immigration activist Jose Antonio Vargas and his organization Define American, the initial scorn quickly disappeared; the questions suddenly became legitimate.

Thought this was a joke saw @joseiswriting name & it became interesting: MTV Casts Documentary On Hardships Of Anglos http://t.co/Y9oXM5vEHR

“Race is uncomfortable for everybody,” Vargas told Mother Jones. “But when you bring in race and whiteness, I think you’re really laying it on thick for people. And that’s why I think we’re getting the reaction we’re getting.”

Vargas says he expected the Craigslist post to elicit some controversy—indeed, it’s exactly this tendency to immediately call out others for racial bias, without attempting to seek understanding, he hopes to explore. “I’m not interested in that ‘gotcha’ moment, where in the age of Twitter we over-communicate without ever actually connecting.” he said. “I am going to let the work speak for itself.”

In recent years, those “gotcha” moments have dominated countless headlines. And the news cycle is a familiar one: It starts with the internet discovering a person doing something, at best, racially insensitive, and at worst, blatantly racist. Outrage moves to social media where users are quick to ridicule the offender in question. The mounting anger is only quelled by a forced apology, firing, etc. But what happens after the hashtags stop trending? The conversations that follow don’t exactly have the same viral potential and are rarely discussed.

“Critical analysis is of utmost importance whenever we talk about race in America,” he said. And for Vargas, the way Americans currently discuss race is “superficial and oversimplified.” But in a time when race is such a loaded topic, this is increasingly problematic. That’s exactly where the “Untitled Whiteness Project” comes in.

The film is currently in its beginning stages and aligns with MTV’s larger “Look Different” campaign, which explores hidden prejudices among millennials. The campaign recently partnered with David Binder Research for a study to examine how young people view their own identities and biases. Among the white 18 to 24 year-olds who participated in the study, 48 percent said discrimination against white people has emerged as just a serious problem as discrimination against people of color. Only 39 percent believed white people had more advantages than people of color.

Vargas wants to discuss these perspectives, shed light on hidden biases, and perhaps even more importantly, create an open discourse for young people to talk comfortably about race and their own identities without judgment.

“This isn’t about making anyone feel bad, “Vargas said. “I want to create a safe place where people can actually explore this conversation.”

“It’s so easy to hate something you don’t know. What’s harder is to actually scratch the surface.”

So expect to see similarly uneasy Craigslist posts to emerge all over the country—Vargas is here to shake things up and get young people to start talking.