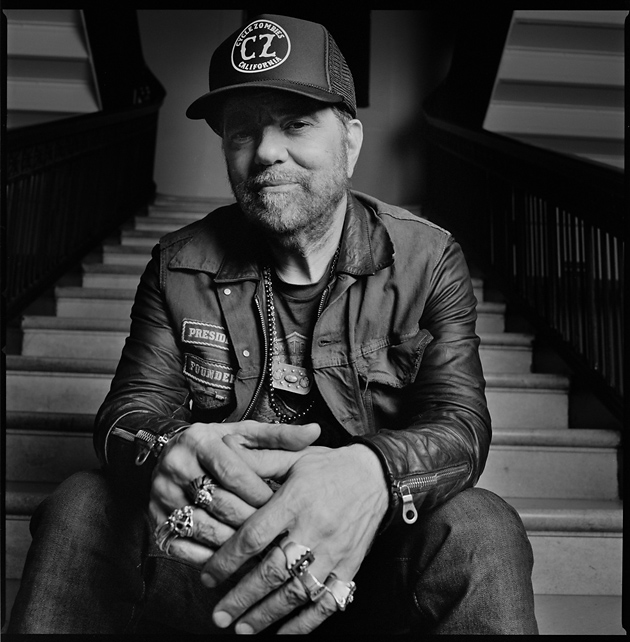 As a producer, Daniel Lanois has helped create several of the most monumental albums of the ’80s and ’90s: U2’s Unforgettable Fire and Joshua Tree (both co-produced with mentor Brian Eno, along with Eno’s own album Ambient 4: On Land), Peter Gabriel’s So, and Bob Dylan’s Time Out of Mind.

Lanois has a second career as a singer, songwriter, and instrumentalist who has covered a matrix of French-Canadian folk, rhythm and blues, jazz, rock, and ambient disciplines since 1989’s Acadie. His recently released Flesh and Machine is an exploratory album of dense ambient sounds developed from acoustic sources of drums, voice, guitar, and steel guitar into new sonic materials. The album is a master class in musical texture and inventiveness that rewards a close listen.

At a recent Brooklyn performance with ANTI- label-mates Tinawaren and The Antlers, I spoke with Lanois about his approach to producing, his experiences with Dylan and Gabriel, and shedding the conventional studio setting. The following is in his words:

I wait for some little piece of magic to guide me to the next position. Not everything we do is fascinating at first; I just get on with working in the most pedestrian way, really, and if I’m lucky enough to hit on a sound that seems special, then I just use that as a stepping stone. If I don’t have a great sound then I don’t come up with much.

Preparation, for me, is about not wanting to waste people’s time. I imagine the needs we’re going to have on that day, and I just try to have that all organized. Some of it is not very glamorous: checking power sources, making sure we don’t have any loud fans where we’re going to record quiet things.

It’s a lesson that I learned in Toronto when I was a kid and played guitar on sessions. The studio people were forever rummaging through closets, fishing out equipment. Hours would go by, people would be in the game room playing pinball while some other guy hit the snare for hours on end. I said to myself, “Is this what rock ‘n’ roll is about? The Ramones walk in the door and they’re going to play pinball? No way! I want the Ramones walking in and rocking out!” There will always be problems, but let’s not have plumbing be the problem. Emergencies are one thing, but certain things are not emergencies—they are fundamentals.

What were the people at Motown doing? Well, they had a house drum kit. That’s where James Jamerson plugs in his bass: It doesn’t become a Farfisa organ by night, it’s the bass sound! So I decided then that I’ll work with my own sound stations plugged in all the time: That’s my bass sound, that’s my drum kit. I had a nice house menu. People know that if they walk in, they might not have to pull the bass out of the case because I’ve got a nice bass, well-maintained, hand-picked, with beautiful sound. Nine times out of ten the bass players say that’s a better sound then they get.

If I’m in a room with smart people, I want to talk about smart things. I want to know what’s going on with them philosophically, what they’re driven by, maybe records they love. They might bring something to my attention, something that they grew up with and admire the sound of. Dylan said to me, “There’s some records that I really like from the ’40s and ’50s and I’d like for you to hear them to understand the energy of them, the beauty of them.” So that’s the kind of conversation that I want to have. That’s what the prep is all about.

“The thing that frightened me the most going into ‘Time Out of Mind’ is that I did not want to sound like a bar band playing the blues.”

I did pay a visit to Bob’s house to listen to some songs long before we went in the studio. He just had the piano and it was just the two of us in a quiet room. We talked about his songs, but we also talked about records that he loves. I left Bob’s house with a nice bit of homework to do—blues records I’ve listened to over the years but hadn’t heard in a while. The records I listened to per Bob’s recommendation all had a sense of discovery about them, a sense of urgency, a sense of the rise of the medium.

I’m not going to let preconception shackle me. But given that it was Bob’s request, I said, okay, I will respect your position and I’m going to make damn sure that we work within that, but what’s most important is: We must make a classic. The thing that frightened me the most going into Time Out of Mind is that I did not want to sound like a bar band playing the blues. The blues is a very dangerous territory because so much great work has been done in America. “You’re going to enter the arena of blues, in 1997, really? That’s pretty fascinating. Wouldn’t you do it in 1947, or ’57? Wouldn’t that be better? Yes, but I wasn’t born!” So, now, how are we going to make it special? There lies the challenge.

And so I had to find a way to blaze through the confines of regular blues and build something special. I kept waiting for that one little crack of light that would give me an opportunity to do something original. It doesn’t take a lot to notice it, but it takes a lot to do something about it. That record is a blues record, but it has other dimensions. They’re a little hard to talk about because they’re largely driven by instinct and vision—that’s just down to what I call the “soul-o-meter.”

“I’m not taking phone calls. I’m not lining up the next project. I’m completely devoted. I’m better than your wife right now.”

Nailing Peter Gabriel into his writing room during the recording of So was a reminder to him of my commitment. What I’m saying to Peter is: “I’m not here to waste my time, and I’m here to serve you. I’m not taking phone calls. I’m not lining up the next project. I’m completely devoted. I’m better than your wife right now. And I’ve come here to make a masterpiece. If you’re going to dilly-dally on the telephone, you’re going to hear about it.” It’s as simple as that. You want diplomacy and kindness and consideration? Get another guy.

People feel the presence of commitment and it’s very contagious. I’m not the kind of person that’s about to accept middle ground. That’s why I don’t like to make records that much anymore: Because they really hurt me. I’m not 20 years old. Plenty of producers are out there breezing in and out of projects; they do terrible work and have no shame about it. I can’t live with mediocrity. That doesn’t appeal to me.

On Time Out of Mind I had to ask the drummer to go home. I said, “I’m sorry, you sound like a bar-room drummer. We’re about to play the blues here, and I want somebody from the South who’s a master on the hi-hat, and the person I’m going to recommend is Brian Blade because he came up in church.” Now, what kind of a person does that? That person might have to be an asshole, might be cruel to somebody. And I don’t mind.

It’s a little hard for me to talk about this right now because I’m not producing anymore. I’m just devoted to the stage and what I’m doing with my sonics. Bringing the studio to the stage really appeals to me right now, just entering a new chapter of creativity, where I don’t want to be huddled up in a conventional studio someplace. We tend to sound better on stages. We’ll do a sound check and it’s like wow, isn’t this amazing! It’s a just a magic moment, and everything sounds beautiful. That’s what I look for now.

I’ve got a very smart crew, idealistic young artisans who want to grow and do special things. I love projections and films. I work with a fella, Adam Vollick from Canada, and we get excited about visuals, and “let’s try this, and magnify this, and make this more psychedelic, use this lens.” That’s what fascinating to me right now: this cottage industry, this little gang that I have, almost like the feeling of a first band.

It would be easy for me to just throw a lot of money around, like, “Yeah, there’s a lighting company in Berlin that did the Nine Inch Nails show; let’s call them up.” It’s a stadium rock mentality and I think people are getting tired of that. I have this conversation with my friends from U2: Is it going to be one more time, the biggest thing ever? Get the Earth to stop rotating for the show? Defy gravity? I think as people get bigger and richer—this is not specifically about U2—but you get the impression that you just buy a show. I’ve gone back to the beginning. I like this nucleus I’m working with. I like the restrictions of my little team. I feel like the Ramones right now.