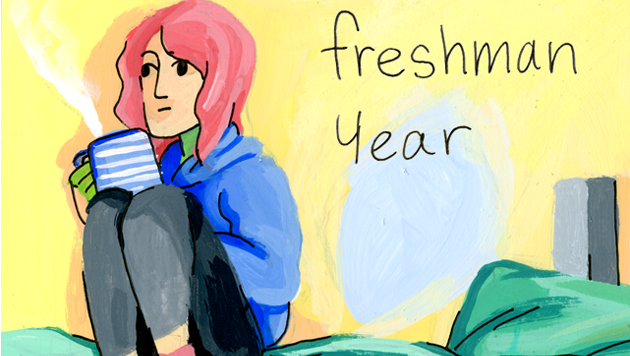 In most video games, the player’s choices determine the ending. In Freshman Year, a short new work by game designer Nina Freeman, your character can wear jeans or a skirt as she prepares for a night out, go alone or with a friend, drink a little or a lot. But all paths lead to the same outcome: a creepy encounter with a man in the dark.

No matter what dialogue you choose for Nina, you lose control over the plotline when she ends up alone with the bar’s bouncer.

Freshman Year, which is free to play, explores what it feels like to get unwanted sexual attention. Like much of Freeman’s work, it’s autobiographical—based on an experience Freeman had during her first month of college.

“You feel like you’re doing this everyday life thing, and then someone comes in and disrupts that,” Freeman says. “I wanted to reflect that sense of disruption, where you feel like everything is fine, and then suddenly it’s not okay.”

Players take on the role of Nina, a girl making plans to meet her friend Jen at a bar. You navigate the game mostly by selecting conversation bubbles. For example, Nina can respond to a text from Jen with “lets not get as destroyed as last weekend lol” or “i will get you a drink tonight. i owe you like twenty haha.”

No matter what dialogue you choose for Nina, you lose control over the plotline when she ends up alone with the bar’s bouncer, who tells her she’s pretty and cuts her off as she tries to go back into the bar. Things escalate from there. The game has only one ending.

Freeman—whose other games include Ladylike, which focuses on a 12-year-old girl with a hypercritical mother, and Cibele, which is about her experience of having sex for the first time—says she designs games for the same reason some people keep a diary. “I usually want to make games about memories that I have complex feelings about, that I don’t really understand and need to sit down with,” she says.

In college, Freeman wrote and studied poetry. Confessional poets like Elizabeth Bishop and Frank O’Hara gave her a model for the work she wanted to do: “games that help players try and get close to someone else’s lived experience.”

That impulse makes her part of a wave of designers putting out noncompetitive, often narrative-heavy games. Gone Home, in which players solve a family’s mysteries by exploring an abandoned mansion, won a slew of high-profile awards when it came out in 2013; one critic called it “the future of storytelling.” (Freeman didn’t contribute to Gone Home but is currently working on another project with Fullbright, the Portland-based studio that designed it.) The same year, Depression Quest, which simulates the experience of depression, sparked the online culture war known as Gamergate.

Freeman says she feels encouraged by the response she’s gotten in the two weeks since she released Freshman Year. “People will tweet at me after they play it and be like, ‘Wow, I feel really upset now, but that was amazing,'” she says. “It’s good that they’re connecting with that aspect of it. That’s what I was going for.”