Evangelical Pastor Rob Schenck was a radical anti-abortion activist who hadn’t put too much thought into gun rights. But rattled by a mass shooting at Washington’s Navy Yard, something inside him shifted; he soon began to question gun culture from a moral standpoint and later preached about the human cost of gun violence instead.

His pivot drew the attention of filmmaker Abigail Disney, grandniece of legendary entertainment mogul Walt Disney. In her gripping directorial debut, The Armor of Light, Disney follows Schenck’s self-exploration into the muddied world of gun control in America. Disney accompanies Schenck to shooting ranges, a National Rifle Association convention, and even a memorable meeting with Lucia McBath, whose son Jordan Davis was shot and killed at a Florida gas station. Along the way, she finds herself wading with Schenck into a moral conflict at the heart of the debate: whether it’s possible to be both anti-abortion and pro-gun.

“[Schenck] ended up being such an eloquent man and a deeply thoughtful and sweet person, which was not what I expected when I first met him.”

Mother Jones spoke with Disney about her family’s relationship with the NRA, her friendship with Schenck, and how the documentary shaped her own views on the polarizing gun debate.

Mother Jones: At the San Francisco Jewish Film Festival this summer, you mentioned you had a completely different documentary in mind. What was that original idea, and how did it shift to the documentary you eventually made?

Abigail Disney: It was that conservatives and conservative values aren’t really reflected in the radical values of the NRA. And the other idea was that the NRA is not what you think it is: It’s an evolving, ever-changing organization, and it has not always been this radical, right-wing arm of the Republican Party, and that the history of the NRA is in fact really interesting.

All of that really fell away because there’s a real difference between a documentary that was all about facts and history and information. People just don’t get as engaged in that kind of documentary—they don’t fall in love, they don’t cry, they don’t forget who they are, they don’t ride with you. As we realized we had richer, vérité kind of people, what we wanted to do is focus in on the vérité story.

MJ: That original idea delved more into your own family background. Can you tell me a bit about that?

AD: That’s right. I almost forgot about that. When I sat there in 1971 and watched my grandfather open Walt Disney World, I was a little 11-year-old girl who worshiped the ground he walked on. You probably couldn’t have found much daylight between the NRA and the Disney company. They probably would’ve had had identical demographics for the people who really loved those companies. Then in 2008, in Florida, you have them up against each other in a court, because one of the Disney employees has decided to, because he’s an NRA member, challenge Disney’s no-gun policy for employees. How does it happen in not very long, 38 years, that you go from two companies with almost identical constituencies to fighting each other in a court of law about a fundamental issue? 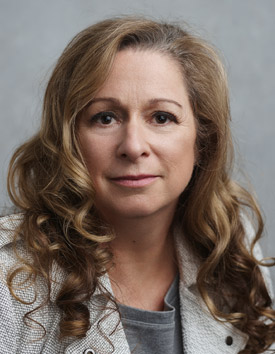 MJ: What drew you then to Rob Schenck’s story in particular?

AD: While we were looking at how we were going to talk about Florida, that’s how we met Lucy McBath. We met Rob, and he was such an interesting story. His whole life was interesting. He ended up being such an eloquent man and a deeply thoughtful and sweet person, which was not what I expected when I first met him. That upended the whole project.

MJ: Why choose this evangelical pastor as the subject through which you’re examining the national gun control debate?

AD: There are very few people who have committed more to the pro-life discourse than Rob has. He’s spent time in jail. He has really lived it. He has committed everything he’s had to it. If in fact he believes that every human life was sacred, I knew that if he had his conscious awakened, I knew he wouldn’t be able to close his eyes to it.

MJ: Was he receptive to you focusing on his internal debate?

AD: Oh my God, yeah. It’s a tough subject for him to talk about. It was almost all risk and not a lot of reward. But he recognized that right out of the gate, because he knows how high feelings run on this issue. He saw the writing on the wall. Yeah, of course, he was reluctant. We met over dinner in Union Station in Washington. We had a three-hour conversation that first time. And he said, “Thanks a lot. Now I have to go home and think about this. I’m going to go pray on this and we’ll get in touch.” [Laughs.] I checked with him every Monday for five weeks, and every week he would say, “I’m still praying.” By the end of the five weeks, I was pretty sure he was going to say no [to being in the documentary]. So I was pretty shocked when he said, “There’s a deep moral failing in the center of my community, and I can’t pretend I don’t see it anymore. So with or without you I have to go forward.”

MJ: How did you get him to agree to let you act as a fly on the wall as he went through this self-exploration?

AD: I keep wondering if everybody on the political left had someone who they were separated at birth from. Wouldn’t that be interesting if that were true? Once we got to know each other, we had such similar impulses. We saw in a similar way, and we developed a strong friendship. We would talk on the phone for hours, philosophically and theologically, about all of these issues. Around the edges of the film, this lovely friendship started to form. And that’s why he was willing to trust me. He signed a release right away, and I said to him, “I think you’re signing this because you’re afraid you’ll chicken out.” And he said yes. [Laughs.] He could’ve stopped cooperating, but he trusted me. I feel so grateful for that.

“I keep wondering if everybody on the political left had someone who they were separated at birth from.”

MJ: You mentioned that you and Rob disagreed on a few things. Did that disagreement factor into the documentary at all?

AD: It didn’t, but it impacted the world around the edges of the documentary, and it continues to affect us. Now that we have a friendship, we can engage in those issues. It’s not like dropping an atomic bomb in the middle of everything because we’ll stay friends no matter how we disagree. We do tease each about the things we disagree about. I don’t judge him, and he doesn’t judge me. It’s powerfully important for me as a pro-choice person and person who supports Planned Parenthood to have Rob accept me as not a baby-killing horrible person. That’s actually a massive step away from his original position, and he’s taking a lot of heat in his world just for being my friend, just for hanging around with me.

MJ: One of the most poignant moments in the documentary was the one when Lucy [McBath] meets Rob at his place. How did that moment come together?

AD: I get very close to people when I’m shooting them. We would go and shoot a scene with Lucy, and I would spend the whole time telling her about Rob. Then I would go shoot a scene with Rob and tell him all about Lucy. Eventually they wanted to know each other. These are two people who would never have overlapped in any other way or context. We brought to the garden at Rob’s office and just sat and watched what unfolded. I remember weeping behind the camera, because I was so moved by the way they connected.

MJ: What is Rob Schenck up to now? How has his life changed since the documentary’s release?

AD: He’s definitely lost funders to his not-for-profit. He’s lost friendships. He’s a really relational person, so that’s really hard on him. He takes that personally. He’s been surprised by the amount of support we’ve gotten. I’ll tell you: I’ve taken heat from lefties. It’s like, “How dare you let these people speak for themselves? How dare you not make fun of them? You let Rob off too easily for his abortion work. You don’t show us the whole depth of what a horrible person he is. Why are you letting him off so easy?” I’ve taken it from feminist friends, and I’ve taken it from lefty friends too. But that reassures me. If the right is attacking us and the left is attacking us, that’s exactly where we want to be.

MJ: Do you and Rob still differ in the way you approach gun control issues?

AD: He would talk about it as an Evangelical. I could develop every argument that I had for gun control, but I could never have done what Rob did, which was to say: In respecting the Second Amendment, you have to be very careful not to violate the Second Commandment. Only an evangelical could’ve arrived at that. When you say the Second Commandment, you will not take any image before me, which means you can’t worship the image or the crucifix itself. You have to worship God. When you worship an idol, you’re substituting a thing for the ultimate. So therefore, in worshipping the Second Amendment and taking your orders from the Constitution over and above your orders from the Bible, are you in fact violating the Second Commandment? Evangelical ears perk up when you suggest the Second Commandment is being violated. That gets their attention. I never would’ve known that nuance about these people, so [Rob’s] able to get under their skin in a way that I never could have.