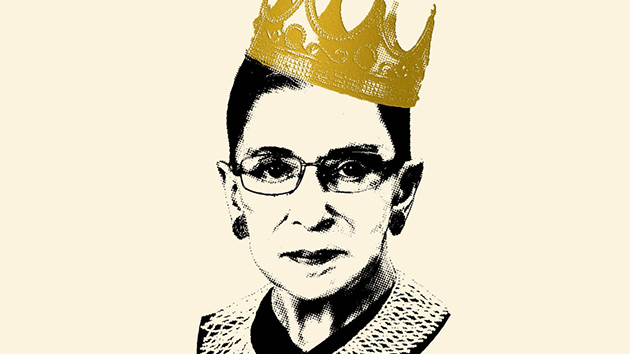 Irin Carmon and Shana Knizhnik are clearly obsessed: The co-authors of the new book, Notorious RBG: The Life and Times of Ruth Bader Ginsburg, pounded out the first manuscript in six months while holding down, respectively, a full-time job as an MSNBC reporter and classes as a third-year law student. “RBG sleeps two hours every night!” Knizhnik told me, laughing. “We basically had to live like her to finish the book in time.” 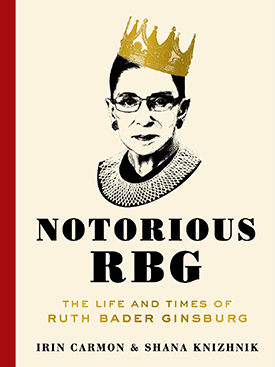 Before writing the book, which chronicles the life of a Supreme Court justice known for her tell-it-like-it-is demeanor and precise legal opinions, Knizhnik had spent more than a year curating a viral Tumblr of “Notorious RBG” memes. She was approached by HarperCollins, which wanted her to turn her social media success into a book. And when Knizhnik responded that she didn’t really see herself as an author, a HarperCollins editor connected her with Carmon, whose beat is women’s rights and reproductive justice. The pair hit it off. “We were really conscious of the fact that viral memes have become books, but they aren’t really books—they’re just a bunch of things on the internet,” Carmon says. “For us, pun intended, it was about trying to do her justice.” Knizhnik agrees: “Our goal was to keep this balance between substance and fun.”

And their book does that well. It’s a detailed history of RBG’s life and career, complete with visuals such as personal photos, letters, and annotated opinions. “She contains multitudes, even in today’s complex feminist conversation,” Carmon says. Indeed. Here are five things that make Notorious RBG a must-read for hip women—and men, too:

1. The Artwork: It’s all created by women. The chapter titles, inspired by the lyrics of rapper Notorious BIG, were designed by Maria “TooFly Castillo,” who runs a women’s graffiti collective in New York City and is celebrated for her notable presence in a male-dominated art form. An inside portrait is the work of Tatyana Fazlalizadeh, who has created a series of posters protesting the harassment of women on the street. (“We used artists that we felt were in the same spirit as RBG,” Knizhnik explains.) An appendix, “Tributes to the Notorious RBG,” is a collage of all the memes fans know and love from the Tumblr, including the favorite, “All them fives need to listen when a ten is talking.”

At a reception, RBG implored coauthor Carmon to spread the word that “no one should get a tattoo of my face.”

2. The Access: Both authors have met RBG in person. Knizhnik was invited to her chambers when the Tumblr began to gain, ahem, notoriety, and Carmon interviewed her for an MSNBC exclusive. In fact, the book was fact-checked with the help of RBG and her family, and both women were struck by the Supreme Court justice’s warmth and thoughtful comments. The justice surprised them, too. For one, she’s dedicated to physical fitness, as detailed in a section titled “The Notorious RBG Workout.” (Yes, she does planks.) They also learned that RBG’s best work is often done in the dead of night. And that she is absolutely horrified that fans are getting tattoos of her—so much, in fact, that she pulled Carmon aside at a reception to tell her to spread the word that “no one should get a tattoo of my face.” Carmon complied. “I was like, ‘Okay, I’ll tell the young people,'” she told me. “She made this face like, ‘Oh my god, this has gone too far.'”

3. The Legal Saga: The book’s greatest accomplishment is in the way it breaks down the workings of the justice system for the average reader while staying true to the complexities of the cases Ginsburg has taken on over the decades. The chapters contain her opinions from key cases with notes that clarify the jargon, although RBG’s opinions are written beautifully (she studied under Vladimir Nabakov) and she views her writing as a “literary art,” notes Carmon. “She always tells her clerk, ‘Get it right, keep it tight.'” Knizhnik spent countless hours sifting through files at the Library of Congress, and even more time seeking permission to use the legal documents she unearthed. The book also delves into the rough spots in Ginsburg’s career: RBG opposes Roe v. Wade because, as she explained in a speech at New York University in March 1993, it “halted a political process that was moving in a reform direction and thereby…prolonged divisiveness and deferred stable settlement of the issue.” Feminists viewed this as a betrayal, and their outcry almost cost RBG her Supreme Court appointment.

4. The Stories: Journalists have profiled Ginsburg, of course, but the book offers amazing moments where the reader really gets the essence of who she is. Carmon and Knizhnik offer scene after scene in which she delivers a smart one-liner or simply shows that she is human—getting nervous in front of the court, for example. In one scene, during a whitewater rafting trip in Colorado, a friend advises her to sit in the back of the raft for fear they’ll hit a rock and RBG’s tiny frame will be catapulted overboard. “I don’t sit in the back,” RGB replied—and we see a photo of her, grinning widely, in the very front. “We knew she was this fierce woman, but to hear how she’s been this fierce for so long was incredible,” Knizhnik says. 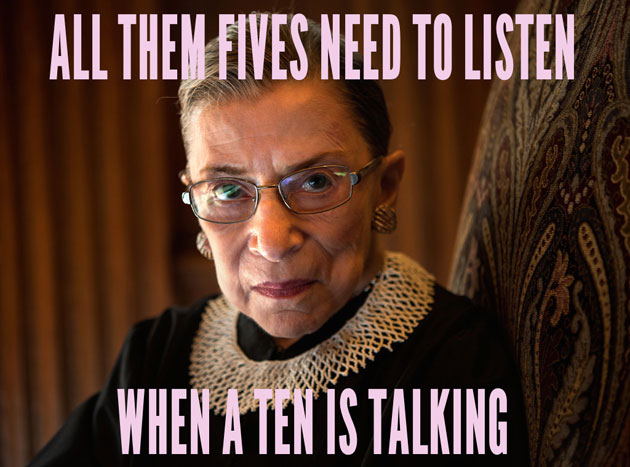 5. The Romance: Ruth and Marty Ginsburg’s love was one for the storybooks, and Notorious RBG conveys that sentiment. Ruth cared for Marty when they were in law school and he was diagnosed with testicular cancer, even typing up his notes to keep him on track at Harvard. When “Justice Ginsburg” was introduced back when she was a new judge on the DC circuit, people usually stuck out their hand to Marty rather than Ruth, which was something of a joke between the two. Marty campaigned hard to help Ruth get on the court, calling on her friends and colleagues to lobby members of Congress and the White House on her behalf. Toward the end of his life, Marty told a friend, “I think that the most important thing I have done is enable Ruth to do what she has done.”