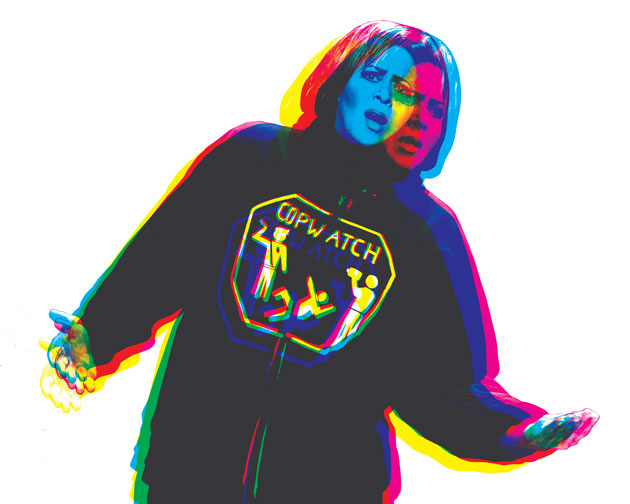 Illustration: Miles Donovan, Source Photo: Kevin Berne/Berkeley Rep
What if everything you knew about school discipline was wrong?

You know her on-screen as Gloria Akalitus in Nurse Jackie, or as Nancy McNally in The West Wing, but these days, Anna Deavere Smith is onstage, solo. As part of an ongoing project she calls On the Road: A Search for American Character, Smith has written and performed at least 18 one-woman plays exploring social issues around the country. Topics have included women tangling with the judicial system, the Los Angeles riots of 1992, and the uproar in Crown Heights following a 1991 car accident involving a Hasidic driver and two seven-year-old Caribbean American kids. Smith has been called “the most exciting individual in American theater right now.” A MacArthur “genius” fellow and a National Humanities Medal holder, she was recently selected to deliver the Jefferson Lecture, the federal government’s highest honor for achievement in the humanities.

For her latest play, Notes From the Field, Smith interviewed some 170 people—from California to her hometown, Baltimore—to inhabit characters based on individuals caught up in the school-to-prison pipeline. She’s taken the performance from coast to coast and will grace Baltimore’s Center Stage on December 4 and 5. In the play’s second act, which Smith calls an “interruption,” she invites audience members to brainstorm potential solutions to the issues the characters raised. Smith sees theater as a unique way into social problems: “We’re in the presence of one another. It’s not like we can start texting or doing our taxes,” she says. A live performance “manages to get undivided attention. In all the varieties of media, that doesn’t happen so often.”

Mother Jones: What came first in your life, acting or activism?

Anna Deavere Smith: One summer when I was in my 20s, I didn’t have any plans, and I happened upon an acting class in San Francisco at ACT [American Conservatory Theater]. It just had my heart. I don’t know that I’m an activist in the traditional sense of the word. I think what I am is a “convener”; I like to convene people around ideas.

MJ: And how did you make your way into documentary theater?

ADS: I became very interested in how the language of Shakespeare worked, how it captured character. You’ve heard that old expression from Shakespeare, “Just speak the speech”? The words themselves will take you to the reality of the character. And so this led me to interview people and to study them, or to do these portraits. I also became interested in telling stories from different points of view. And once you start telling stories from different points of view, you’re already in a form of debate.

“You’ve heard that old expression from Shakespeare, ‘Just speak the speech’? The words themselves will take you to the reality of the character. And so this led me to interview people and do these portraits.”

ADS: Wow. A play that intrigues me right now is Richard III—going back to Shakespeare. People say House of Cards is kind of a combination of Richard III and Macbeth.

ADS: Oh, theater is very exciting right now. You know, I was just with a friend who would practically do anything to get a ticket to Hamilton in New York. [Laughs.]

MJ: For Notes From the Field, you talked to different types of people, from Yurok tribal judge Abby Abinanti to former inmates. How do you go about creating a play from these interviews?

ADS: Some people study a text very deeply. The people are my text. I study their words and what their words sound like, over and over again. When I was a kid, my grandfather said that “if you say a word often enough, it becomes you.” Thinking of that later in life gave me this idea that I could try to become America by learning the words of people from many aspects of the country. It doesn’t matter how educated they are. By living in the world and living their experiences, they bring extraordinary truths. I try to do those truths justice.

MJ: In the second act, the tables are turned and the audience has to engage with the play they’ve just seen.

ADS: It’s a thinking that’s still in process. How can I truly cause an audience to think, debate, and act? I would like the people who have been watching to have a moment in that interruption to consider what just happened. So it’s interrupting the passive observance of the spectacle.

MJ: What should we understand about the school-to-prison pipeline?

“The majority of inmates in Pennsylvania state penitentiaries were in special ed or didn’t learn to read. I mean, what more do we need to know?”

ADS: I’m in the camp that says there’s a poverty-to-prison pipeline. School discipline is just one part of it. Poverty makes it very difficult in an already competitive world for kids to get on a straight track where they can actually love learning. There’s a lot we know now about brain development, and about what happens chemically to cause hopelessness and despair. One of my characters points out that the majority of inmates in Pennsylvania state penitentiaries were in special ed or didn’t learn to read. I mean, what more do we need to know? That could be school discipline, but it’s also the inability to reach these young people intellectually. And so they turn away from what we consider to be the root: knowledge. We have to rethink all this.

MJ: How should we try to solve this problem?

MJ: Being from Baltimore, how did you respond to what happened to Freddie Gray and the unrest that followed?

ADS: Well, the story is still unfolding. The riot made it easy for me to find people to talk to. You know, whenever there’s some kind of unrest and people are unsettled, they want to try to make sense out of what happened.

MJ: Do you think Obama is having an impact on criminal justice?

ADS: Obama is doing a historically important thing. He was the first sitting president to visit a federal prison. He wants to change our whole attitude toward drugs and punishment. And ever since the incidents around Trayvon Martin, he has made it clear that he’s concerned about vulnerable youths, especially youths of color. We’ve never had a president who has prioritized those things in our country. And so even if he can’t achieve that much more during his presidency, many of us hope that’s what he’s going to be doing when he leaves.

MJ: A number of 2016 presidential candidates have made criminal justice reform part of their campaigns. What do you make of that?

ADS: Well, it is apparently the place where both Republicans and Democrats agree: Prisons don’t work and they cost too much money. So, I’m glad about that. We understand that we gotta go down a different road.

MJ: Are we living in a hopeful or dismal time?

ADS: It’s a tough time. I happen to be a hopeaholic. I tend to look at problems as an opportunity to do some work.

MJ: What’s next for you?

ADS: Well, I’ll go back to New York and look for a job, because the job I had for seven years, Nurse Jackie, ended. So, I’ll be looking for a job to pay my rent.