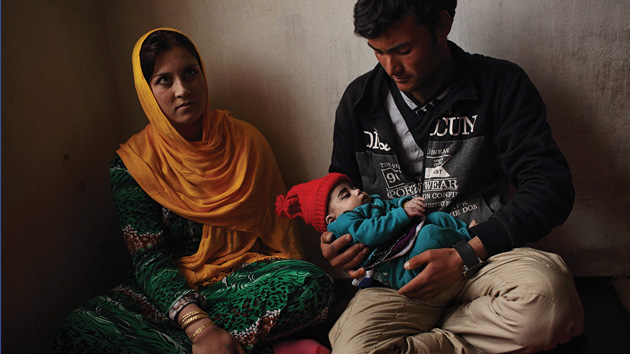 Before the New York Times stationed him in Afghanistan, Rod Nordland spent years reporting on the Soviet occupation and its aftermath for Newsweek. But he couldn’t have anticipated the dilemma he would face covering America’s longest war. In 2014, Nordland was poking around for a story about honor killings when he learned of Zakia and Mohammad Ali, a young Afghan couple who had defied their families, cultural conventions, sectarian loyalties, and Islamic law in order to marry.* His front-page Times story on Afghanistan’s “Romeo and Juliet” became an international sensation. As everyday Afghans celebrated the daring couple and the authorities threatened Ali with kidnapping charges, Nordland found himself increasingly wrapped up in their fate. His new book, The Lovers, comes out in January.

Mother Jones: How did you come across this story?

Rod Nordland: In a random email in bad English from a women’s affairs ministry official in Bamiyan. I get a lot of crank email, but it pays to read everything.

MJ: You call their story “exceptional and ordinary.”

RN: Cases like theirs are commonplace. That they managed to get together without getting killed, so far, is exceptional.

“That they managed to get together without getting killed, so far, is exceptional.”

MJ: When did you know that you were in for the long haul?

RN: I realized at some point [after the first story came out] that I had completely altered Zakia and Ali’s lives. I started hearing from them how often people were recognizing them, and hearing from embassies that they weren’t going to do anything to help them to safety.

MJ: What was your biggest ethical conundrum?

RN: It was a series of decisions taken on the spot that inevitably, it seemed, dragged me into their situation. The moment of decision was when I could have stood back as an observer and waited until the police arrived at their hiding place—a hiding place my very presence risked exposing. This would have been, in a dramatic, purely journalistic sense, the better story. Or I could put them in the only cars around, my own, and drive them to safety—not the better story, but the right thing to do.

MJ: How did they deal with their sudden celebrity?

RN: They were completely mystified by it. They can’t read, don’t watch TV, never had one in their homes. They’d be stopped on the street by admirers and asked to pose for a selfie, which brought it home—but it was distressing.

MJ: And how did Afghan officials respond?

RN: They just wanted this story to go away, but when Ali was arrested and Zakia put in a shelter, the firestorm among Afghan young people really frightened the regime, so they concluded the best thing was to make those criminal charges disappear. That did not, however, remove the threat of death Ali and Zakia faced from her family.

MJ: The regime was angry with the Times, no?

“The very idea of a love story threatens the patriarchal society, which fundamentally is based on fathers controlling their daughters’ lives.”

RN: The women’s affairs minister was particularly antagonistic. Her accusation was, “You made this a Romeo and Juliet story.” The very idea of a love story threatens the patriarchal society, which fundamentally is based on fathers controlling their daughters’ lives.

RN: On the run, the couple—as well as Ali’s father, Anwar—realized illiteracy was a real handicap. So, last spring, seven of Ali’s and Zakia’s nieces and nephews began school. People also began using the law to press charges against their families when they were prevented from marrying—something that rarely if ever happened before. Counselors cited Zakia and Ali as a precedent.

MJ: How were you able to get so close to this illiterate couple given the cultural taboos around men and women interacting?

RN: I had a translator, Jawad Sukhanyar, who was remarkably sensitive. He was even able to win Zakia’s trust. With her, we did interviews either in person with her husband or father-in-law present, or using a speakerphone so it did not seem like a private conversation between a married woman and a married man [Sukhanyar]. It would have been 100 times easier to do this book if I were a woman.

MJ: The couple is now a trio, with a baby daughter. Where are the young lovers now?

RN: Back in Bamiyan, keeping a low profile and hoping for the best.

Correction: The original version of this article misstated the year Nordland met the couple.