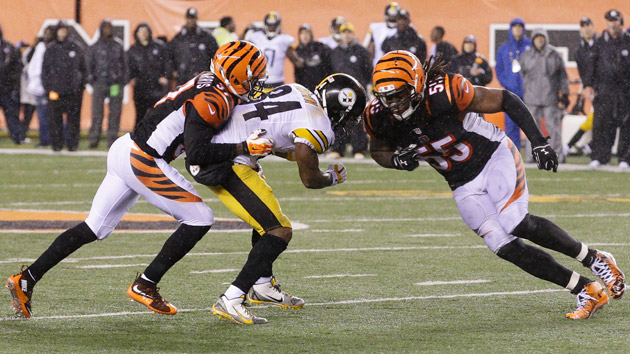 For years, the National Football League has denied a connection between football-related head trauma and brain disease. But in a surprising admission before a congressional subcommittee on Monday, the NFL’s top health and safety official conceded that a link exists between football and chronic traumatic encephalopathy, the debilitating brain disease found posthumously in numerous professional, college, and high school football players over the last decade.

Jeff Miller, the league’s senior vice president for health and player safety, acknowledged the connection during a roundtable discussion before the House Energy and Commerce Subcommittee on Oversight and Investigations. After Dr. Ann McKee, a Boston University neuropathologist who has discovered CTE in the brains of dozens of deceased NFL players, testified that she “unequivocally” thought there was a link between playing football and CTE, Miller was given a chance to respond. “Well, certainly, Dr. McKee’s research shows that a number of retired NFL players were diagnosed with CTE,” he said, “so the answer to that question is certainly yes.”

The league stood by Miller’s comments Tuesday, even as an attorney representing former players used Miller’s admission to bolster a challenge to the proposed $1 billion concussion settlement with the NFL. (The settlement, approved last year, excludes future payments for retired players with CTE.)

Here’s a look at the league’s stance over the years—and how it has changed:

May 12, 2000: The NFL criticizes a set of guidelines by the American Academy of Neurology recommending that coaches remove football players who suffer from a concussion and are knocked out during a game. Mark Lovell, then a neurologist in Detroit who worked as a consultant for the NFL and National Hockey League, told the New York Times, “We don’t know whether being knocked out briefly is any more dangerous than having amnesia and not being knocked out.”

October 2003: The NFL’s Mild Traumatic Brain Injury (MTBI) committee, a group of doctors formed in 1994 to examine the long-term effects of concussions, releases its first study. The committee’s six-year study contended that no NFL players suffered long-term brain damage as a result of repeated concussions and that NFL players differed from boxers in that regard, according to ESPN’s Outside the Lines and PBS Frontline.

October 2006: In a study published as part of a series in Neurosurgery, Dr. Elliot Pellman, a rheumatologist and co-chairman of the NFL’s Mild Traumatic Brain Injury Committee, and Dr. David Viano write: “The results of this study indicate that many NFL players can be safely allowed to return to play on the day of the injury after sustaining a mild [traumatic brain injury].” The study also notes, “The results of this study indicate no evidence of worsening injury or chronic cumulative effects of multiple mild TBIs in NFL players.”

May 14, 2007: In an interview on HBO Real Sports, MTBI committee co-chairman Ira Casson says no connection existed between head injuries in football and depression, dementia, early onset Alzheimer’s, or any other long-term problems.

May 31, 2007: The University of North Carolina Center for the Study of Retired Athletes releases a report linking concussions to depression in former NFL players. Dr. Henry Feuer, who worked as a medical consultant for the Indianapolis Colts, challenges the findings and calls the results, based on written surveys, “virtually worthless.”

October 28, 2009: Goodell defends the league’s concussion and player safety policies before the House Judiciary Committee and acknowledges that “it’s fair to assume head trauma may play a role” in contributing to CTE. “Whatever its incidence, CTE is not limited to football players, but is instead a broader public health issue that needs to be recognized as such,” Goodell said in prepared remarks. Rep. Linda Sanchez (D-Calif.) played a clip of Casson’s interview with HBO Sports during the hearing and likened the denial to Big Tobacco’s refusal to link between smoking and long-term health effects.

December 30, 2009: For the first time, a NFL official concedes a link between concussions and long-term health consequences. “It’s quite obvious from the medical research that’s been done that concussions can lead to long-term problems,” NFL spokesman Greg Aiello told the New York Times. “We all share the same interest. That’s as much as I’m going to say.”

January 4, 2010: At a second House Judiciary Committee hearing on the legal issues surrounding brain injuries, Casson again denied the link between concussions and long-term brain damage, noting that the so-called tau deposits found in the brains of deceased NFL players during McKee’s research “have never been linked to athletics or head trauma.”

November 16, 2012: Documents obtained by ESPN’s Outside the Lines and PBS Frontline show that the NFL’s independent retirement board shelled out $2 million in disability benefits from the 1990s to the 2000s to several former NFL players who suffered debilitating brain injuries from “League football activities.” The day of the report, at a speech at Harvard School of Public Health, Goodell does not address the long-term effects of concussions head-on. “In recent years, there has been a much sharper focus on concussions in football and other sports,” he said, according to prepared remarks. “There are still unanswered questions, but scientists and doctors know more about concussions and their long-term potential effects than they did even a few years ago. The key issue for us is how we use this new understanding to make the game even safer and more exciting in the future.”

December 17, 2012: In an interview with Time, Goodell acknowledges that damage can come from the sport, but doesn’t take a side on the medical debate. “It doesn’t take a lot to jump to the conclusion that constant banging in the head is not going to be in your best interest,” Goodell said.

September 4, 2013: After a proposed settlement is reached between the NFL and more than 4,500 retired players in a landmark concussion lawsuit, Goodell says on CBS This Morning that “there was no admission of guilt. There was no recognition that anything was caused by football. But the reality is, we want to help our players.”

September 12, 2014: The New York Times reports that an actuarial report performed for the league found that nearly one-third of retired players are expected to have lasting cognitive problems.

March 18, 2015: Dr. Joseph Maroon, a neurosurgeon for the Pittsburgh Steelers and consultant to the NFL’s head, neck, and spine committee, tells NFL Total Access that the league has never been as safe as it has been today. He added, “I think the problem of CTE, although real, is it’s being over-exaggerated and it’s being extrapolated to youth football and to high school football.”

February 4, 2016: When asked during Super Bowl week whether there was a link between football-related head trauma and degenerative brain disorders, San Francisco neurosurgeon Dr. Mitchel Berger, who sits on the NFL’s head, neck, and spine committee, says, “No.” Berger clarified his stance in a follow-up interview with Time, noting, “There’s an association between football, we think, or any traumatic brain injury, and possible long-term effects in terms of neurodegeneration.” To say there is a link, he says, implies “a one-to-one relationship between playing and getting CTE.”