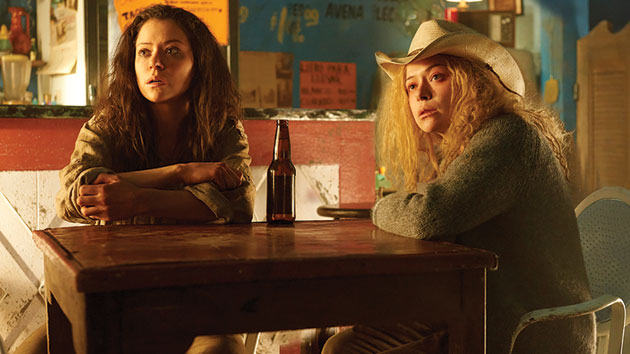 When I try to tell my friends about Orphan Black, I get excited and things come out garbled: “It’s about clones, but it’s also a mystery. The clones get sick, and there’s this race for a cure, but also a quest to find out where they come from and why—and there are these crazy pop-science researchers who modify their own bodies. The military might be involved.”

More calmly put, the BBC drama, whose fourth season kicks off tonight, is a complex futuristic thriller with themes ranging from self-identity and scientific ethics to religious extremism. But perhaps the show’s greatest strength is the reproductive rights storyline that has won it acclaim as a feminist triumph—even though it was created by a couple of guys. I reached out to one of those guys, Graeme Manson, to talk about the show’s mind-bending science and feminist themes. For a little catchup, here’s the season 1 trailer.

“We’re such irrepressible creatures. If you put a gun in a human being’s hand, sooner or later they’re gonna squeeze the trigger.”

Mother Jones: How did you and co-creator John Fawcett get to a series about cloned humans?

Graeme Manson: We were looking for a high-concept feature film idea, and that’s where we came to clones. We’d been friends for 20 years. John’s a horror and sci-fi person. I was into sci-fi, drama, and comedy. Our tastes intersected at black comedy. John pitched the opening scene for “Orphan Black,” where a girl gets off a train, looks across the tracks, sees her double, and in that moment the double commits suicide. That was all we had! It was like a four-sentence pitch, and we took it from there. John got juiced by the technical aspects of shooting a single actor playing multiple roles, and I got juiced on looking at clones as a concept and as something that was beginning to happen in the zeitgeist in terms of Dolly the Sheep. I found the psychological implications really rich: What happens if we clone humans? How do you feel about your genetic identicals—after 50 years, do you not even care that you bump into them in the supermarket?

MJ: Where do you stand on the ethics of cloning?

GM: We’re a sci-fi show, and a conspiracy mystery, so we naturally look at the scarier, more conspiratorial aspects of science, and that’s not real science. There is a consistent civilian mistrust of science where 98 percent of the time, scientists have mankind’s best interests in mind. But corporate science, big science, for-profits, military science—they’re not necessarily creating science that’s good for mankind. We like that question of what’s going on beyond the lab door. We think about what’s occurring right now that’s sinister or could be misused or is complex ethically. CRISPR technology, gene editing, germ-line editing: These are sciences that could change the face of mankind. We’re such irrepressible creatures. If you give us a technology; if you put a gun in a human being’s hand, sooner or later they’re gonna squeeze the trigger.

MJ: What kind of science are you guys eyeing for the upcoming seasons.

GM: Everything from genetic patents to “neolution”—self-directed evolution where humans are offered the technological choice of intervention in their bodies, be that biohack [DIY experimentation], gene editing, or whatever. We have one really strong science writer, Chris Roberts, and story consultant Cosima Herter is a science historian—we like a historical context. Eugenics runs through all of the science we’re doing. From Victorian times to the early Cold River Institute genealogical studies, all these eugenical movements thought they had a good intention: “If only we had the right kinds of people, we would improve society.” But what are the right kinds of people? You’re talking about immigration, all these hot-button topics. If you’re gay, straight, or bi. What’s right? What’s legal? What’s defined? And then you get in there and start messing with the genome—it’s like, “Ugh!”

That’s a pretty juicy side of the show for us. We always find something there to be mulling and putting forward in the show as an interesting take on science or ethics that we don’t have an answer for, but you put it on the table and because there’s always these two sides to it—cutting-edge science is a good thing, but how could it manifest otherwise?

MJ: The show also has a strong reproductive rights theme: One clone’s eggs are harvested without her consent. Another narrowly escapes having her ovaries forcibly removed. And the clones are monitored—usually by men. What are we to make of all this?

GM: Those are ethical things, and it certainly plays as a very strong feminist statement on our show, which is something [lead actress] Tatiana [Maslany] is passionate about. John and I always say that when we started with the concept of clones, we didn’t realize what a feminist statement it would become in terms of body autonomy. These things became very apparent to us as we dug deeper, and the show as a whole is very committed to those kinds of issues portrayed in their complexity.

MJ: Tatiana has formidable task of playing all these different clones. Which one is the most challenging for her?

GM: I think Rachel, because she’s stiff and formal and cold and powerful and corporate and all of that—the opposite of Tatiana. Certainly in the beginning Rachel was very foreign to her. I know that she loves playing Krystal, because it’s not the kind of role she ever gets offered. They’re all a challenge. We work really closely with her on who the characters are when they’re coming. We come up with something we might need for story, and then we’ll take it to Tat to talk character.

“Our core actors are all very good at finding things that we don’t necessarily see in the script.”

MJ: It sounds like you give your actors a lot of input.

GM: We do. Our core actors are real pros and they’re all very good at finding things that we don’t necessarily see in the script. We love to give a little bit of leeway for the actors to play at the end of scenes or to bring their own flair to the scenes. We give our actors and our directors a chance to do some of that. Certainly Tat has a lot of input. When we run into story problems in the writer’s room, sometimes we’ll jog down to set and see what Tat thinks one of her many characters might do in that situation. She’s always very good at coming at it from a character point of view.

MJ: Where did you find Tatiana, anyway?

GM: Due to the vagaries of financing, we had to cast a Canadian lead. We saw everybody in that age range in Canada! The show wasn’t going to happen unless we had buy-in from both Canadian and American networks. Luckily, it was unanimous that Tatiana could handle it. But it was only once we started to see those clone scenes put together that we were like, “Damn, she’s good.”